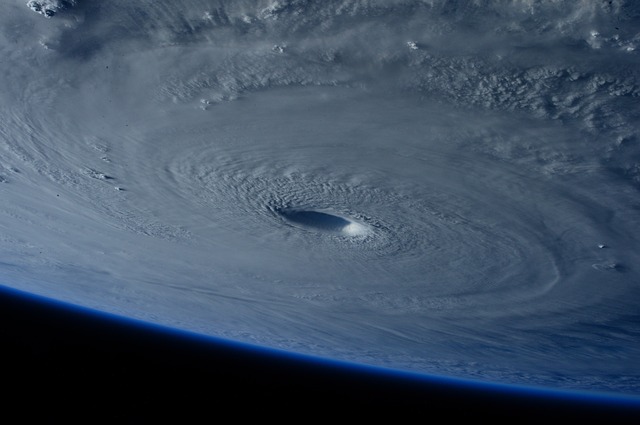 Whatever they are called, tropical cyclones all form the same way.

A cumulonimbus cloud. A tropical cyclone has so many of these, they form huge, circular bands.

Air from surrounding areas with higher air pressure pushes in to the low pressure area. Then that “new” air becomes warm and moist and rises, too. As the warm air continues to rise, the surrounding air swirls in to take its place. As the warmed, moist air rises and cools off, the water in the air forms clouds. The whole system of clouds and wind spins and grows, fed by the ocean’s heat and water evaporating from the surface.

As the storm system rotates faster and faster, an eye forms in the center. It is very calm and clear in the eye, with very low air pressure. Higher pressure air from above flows down into the eye.

Tropical cyclones usually weaken when they hit land, because they are no longer being “fed” by the energy from the warm ocean waters. However, they often move far inland, dumping many inches of rain and causing lots of wind damage before they die out completely.

The two GOES satellites keep their eyes on hurricanes from far above Earth’s surface—22,300 miles above, to be exact!

These satellites, built by NASA and operated by the National Oceanic and Atmospheric Administration (NOAA), save lives by helping weather forecasters predict and warn people where and when these severe storms will hit land.