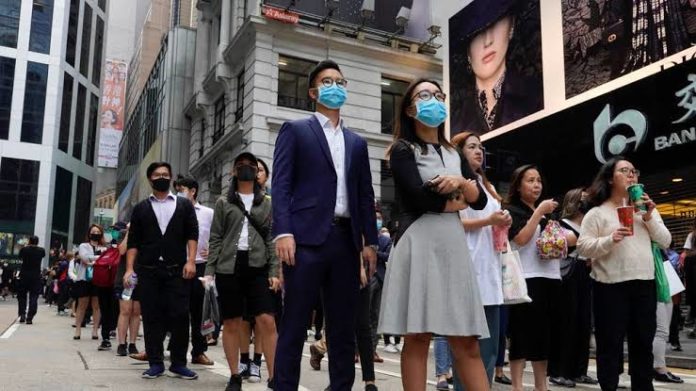 Hong Kong is expected to confirm on Friday it plunged into recession for the first time in a decade, amid concerns the economy could be in even worse shape than feared as months of anti-government protests take a heavy toll.

Preliminary figures in October showed the Chinese-ruled city’s economy shrank by 3.2% in July-September from the preceding period, contracting for a second straight quarter and meeting the technical definition of a recession.

With no end to the increasingly violent protests in sight, analysts say the slump could be long and deep, with gross domestic product seen shrinking further this quarter and well into next year.

The financial and trade center was already under strong pressure from the prolonged tariff war between Washington and Beijing, but the increasingly violent demonstrations, which have gone on for more than five months, have delivered a decisive blow.

“We assume the violent protests will continue for the whole year in 2020 unless the Hong Kong government will do something really special (to end the conflict), which it seems to be avoiding,” said Iris Pang, Greater China economist at ING, who expects the economy to shrink by 2.2% in 2019 and 5.3% in 2020.

Frequent transport disruptions, violent clashes between police and protesters and the use of tear gas have battered the retail sector and scared off tourists, especially from mainland China, who made up around 80% of the 65.1 million visitors to the city in 2018.

August retail sales were the worst on record – down 23% from a year earlier – while September’s plunged 18.3%.

Shops, restaurants and other businesses across the Chinese-ruled city increasingly close early as protests spring up, at times daily, and often with little or no notice. Some smaller businesses have had to close for good.

Shopping malls near the heart of the financial center that house some of the world’s biggest luxury brands have shuttered early most days this week as the unrest escalated, with tear gas smoke billowing between skyscrapers, at times during lunch hour.

The protests have presented the city – one of the world’s most important financial hubs with total banking, fund and wealth management assets worth more than $6 trillion – with its biggest political crisis in decades.

Business activity in the private sector fell to its weakest in 21 years in October, according to IHS Markit, while demand from mainland China declined at the sharpest pace in the survey’s history – which started in July 1998.

The government has rolled out stimulus measures since August, but since it is forced to keep a high level of reserves by its Hong Kong dollar peg to the U.S. greenback, the packages have been relatively small.

Analysts also doubt the effectiveness of handouts, since the uncertainty prevents businesses and consumers from spending and investing, and store closures will lead to job losses.

“Given how poor sentiment is, we do not expect the stimulus to have a meaningful impact until the political unrest comes to a halt,” said Tommy Wu, senior economist at Oxford Economics, who predicts a 1.5% contraction in GDP for 2019 and “another decline” in 2020.

“But we do expect more stimulus to be rolled out in the future.”