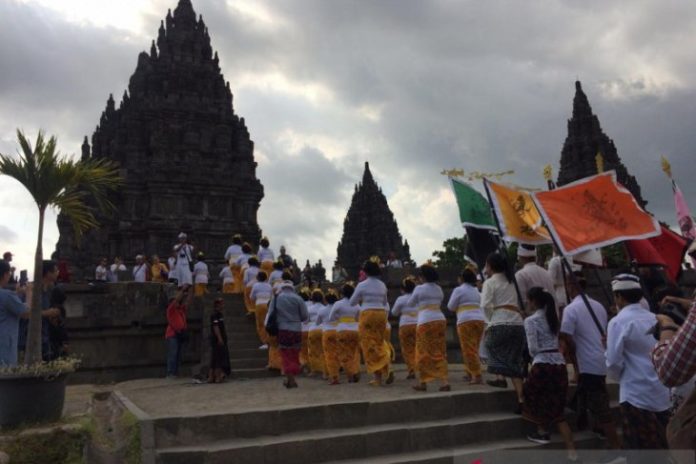 Sleman, Yogyakarta (ANTARA) – Hundreds of Hindus across Indonesia performed the Abhiseka ritual of sanctification for the first time in 1,163 years, at the Prambanan Temple located between Sleman, Yogyakarta, and Klaten, Central Java, Tuesday. “After we discovered the inscription written on the day the temple was established, which is November 12, 856 AD, along with rituals conducted, Hindus then prepared to perform the same ritual. So it is basically to commemorate temple’s inauguration by Rakai Pikatan Dyah Seladu back in that year,” Made Astra Tanaya, a member of the committee that performed the Abhiseka, said.

Abhiseka is also held to denote the golden era of the old Mataram Kingdom, which was not conducted earlier since Hindus usually performed the Tawur Agung ritual to sanctify human beings and the universe.

The ritual of Abhiseka is considered a turning point in returning the energy for both human beings and Mother Nature, said Tanaya, who officiates as the coordinator of the Indonesian Parisada Hindu Dharma (PDHI) Yogyakarta.

It was a series of rituals which began Saturday, November 9, opened by the Matur Piuning ritual as a way of requesting permission to the ancestors.

It continued with the pageantry of the eternal flame of Mrapen and holy water of eleven wellsprings around the area starting from the Boko Temple to the Prambanan temple where people then performed a prayer and pradaksina or circumambulation.

The main ritual was held today with such offerings mentioned in 25 inscriptions of Hinduism during the Mataram Kingdom era.

Another ritual performed was Manusuk Sima, based on the inscription, with the whole ritual ending with a traditional dance performance of Siwagraha which narrates stories of the Prambanan temple reconstruction.