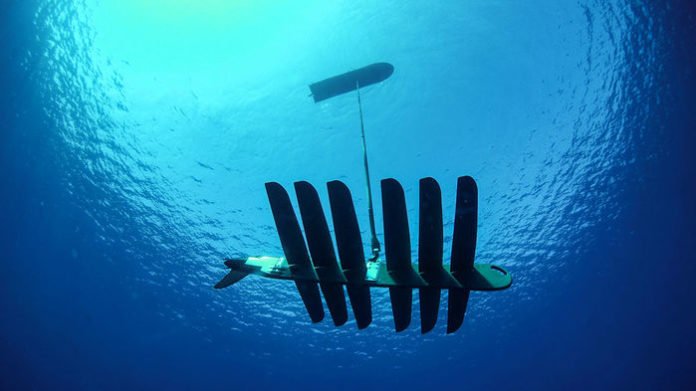 There is no force on Earth quite like a subduction zone. Slips along these faults, found where plates of dense ocean crust dive beneath continents, cause the world’s most destructive earthquakes and tsunamis: 1964 in Alaska; 2004 in Indonesia; 2011 in Japan. But much remains unknown about how those faults slip and stick between catastrophes.

The radio signals of GPS, so powerful for tracking crustal movements on land, can’t penetrate the abyss. To gauge motions underwater, scientists rely on a daisy chain in which a ship tracks acoustic beacons on the sea floor—and the ship, in turn, fixes its position with GPS. Now, a team led by David Chadwell, a geophysicist at the Scripps Institution of Oceanography in San Diego, California, has found a way to cut costs by replacing the expensive ships with ocean-going drones.

“It’s going to make a huge difference,” says Laura Wallace, a geodetic scientist at GNS Science in Lower Hutt, New Zealand. Last month, the U.S. National Science Foundation (NSF) endorsed the approach by announcing a $5.5 million grant to Chadwell’s team to buy beacons for 16 seafloor sites and three drones to monitor them—more than doubling the ability of U.S. scientists to track movements of the ocean floor.

Earth scientists use GPS to measure the strain that builds up quietly between quakes. At the Cascadia subduction zone off the Pacific Northwest, for example, GPS stations on land suggest that enough strain has accumulated to drive a magnitude-9 earthquake when the fault finally ruptures. But the land-based measurements also hint that strain along the fault’s midsection, off the coast of Oregon, is being relieved by a type of harmless slip called creep. That suggests the fault could rupture in pieces, in a series of independent, smaller quakes. But without offshore measurements, scientists only see half the picture, says Harold Tobin, a geophysicist at the University of Washington in Seattle.

Acoustic GPS—tracking seafloor beacons by ship—is a pricey way to get these data. Japan has spent more than $3 billion on acoustic GPS over the past 10 years to monitor its dangerous offshore faults. By 2020, Japan’s acoustic GPS network will include 27 stations, each consisting of multiple beacons.

The few sites that were operating at the time of the 2011 Tohoku earthquake found that the fault slipped more than 30 meters in its shallow sections, driving the devastating tsunami. Frequent monitoring since, with ship visits now every 2 months, has shown how strain accumulates irregularly across the fault. “They can tell exactly where the patches are that would rupture in the next earthquake,” says Noel Bartlow, a geophysicist at the University of California, Berkeley, who is part of the new NSF grant.

Even more tantalizing is evidence, seen prior to the 2011 earthquake in Tohoku and elsewhere, of fault ruptures that occurred over the course of weeks rather than minutes. Perhaps such “slow slip” regularly precedes earthquakes along subduction zones and could be used as a warning, says Paul Segall, a geophysicist at Stanford University in Palo Alto, California. That, he says, “would have enormous societal implications.”

But tracking the acoustic beacons requires research ships with GPS-guided thrusters that cost up to $50,000 a day to operate. And the measurements are by nature intermittent, depending on ships’ visits.

In 2012, Chadwell began to explore whether the Wave Glider, a drone developed by Liquid Robotics in Sunnyvale, California, could replace ships. The drone is a 3-meter-long surface craft tethered to a tube, 8 meters down, lined with oscillating fins, which harvest energy from ocean waves. Costing just $500 a day to run, the drone could carry a GPS unit and linger for weeks in a tight circle above the seafloor beacons. In a 2016 test at Cascadia, a glider lasted 40 days and traveled nearly 500 kilometers; its near silence interfered far less with the acoustic signal than a ship’s engine. Since then, Chadwell’s team has used the drones each summer at six acoustic GPS sites at Cascadia, along with others in Alaska and New Zealand.

NSF hasn’t decided where to deploy the new instruments it is funding, but the equipment is enough to cover one subduction zone in detail—and perhaps several. Modeling studies indicate each new seafloor site will add as much knowledge as up to 30 GPS stations on land. And their use isn’t limited to subduction zones, Chadwell says. They could be placed at the seams where tectonic plates spread apart, which are almost all found underwater. Or they could be installed on the flanks of undersea volcanoes, which inflate before eruption.

Many hope the NSF grant will be a down payment for a much larger project, formerly known as the Subduction Zone Observatory and now called SZ4D, that would cost hundreds of millions of dollars and would intensively monitor subduction zones—perhaps even catching a magnitude-9 earthquake in action. Tobin, who leads planning for SZ4D, says, “Virtually everyone sees this as the first building block for that infrastructure.”