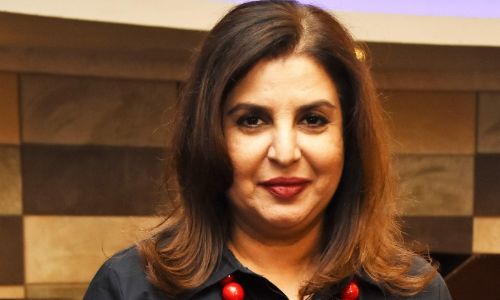 (PTI) Filmmaker-choreographer Farah Khan said making films is not a “gender-specific job” and she rejected the tag of being a ‘woman director’ right from the outset.

Farah, who made her directorial debut with the 2004 Shah Rukh Khan-starrer “Main Hoon Na”, said it was strange how some female directors have accepted such labels.

“I genuinely don’t think that a director needs to have a gender. It’s not a gender-specific job. That’s something I sort of have always rejected at the beginning.

“Very strangely, I find a lot of women directors not only accepting that but also reveling in it. Then you talk of gender and pay parity,” she said.

The director was in conversation with film critic Rajeev Masand at the International Film Festival of India (IFFI) on Wednesday here.

Farah quipped she simply happens to be a woman which makes her “more organized, more hardworking and better at my job”.

“But other than that if you remove my name from ‘Main Hoon Na’ and put ‘Farhan Khan’, how will you know if a man or woman directed it?” she asked the audience.

Farah said a lot of films with a social message are being made and the viewers are appreciating them as well, but what kind of message they take back home, it completely depends on them.

If films had that much influence on the world, people would have started following ‘Gandhigiri’ as a religion and, friendship would have fostered between India and Pakistan, she said.

“I feel no director should be told what they want to or don’t want to make. That pressure should not be put on anybody. Everybody needs to make that movie that comes from within,” she added.

The filmmaker said she blames the audience for choosing to watch a big hero movie over a female-centric film.

“If the actresses feel that they are not being paid accordingly or that they have it harder, it’s only because it’s a business module. Big heroes with big-ticket films tend to get more business.

Addressing the cinema versus streaming services debate, Farah said digital streaming is the future but to say that it will replace mainstream cinema would be wrong.

She is set to produce the upcoming Netflix original film, “Mrs. Serial Killer”, starring Jacqueline Fernandez. It will be directed by Farah’s husband, filmmaker Shirish Kunder.

According to reports, Farah is set to direct the remake of “Satte Pe Satta”, which will be produced by Rohit Shetty.

Asked to comment on the same, she dismissed the reports as rumors.

“Who said a remake of ‘Satte Pe Satta’ is being made? It’ll be the truth when we say it. The media creates a remake every week, I have not made any announcement about this till date,” the director said.