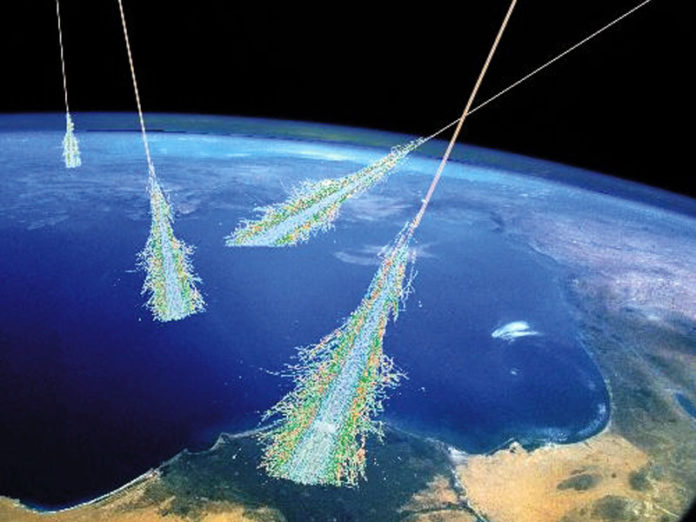 Cosmic rays are atom fragments that rain down on the Earth from outside of the solar system. They blaze at the speed of light and have been blamed for electronics problems in satellites and other machinery.

Discovered in 1912, many things about cosmic rays remain a mystery more than a century later. One prime example is exactly where they are coming from. Most scientists suspect their origins are related to supernovas (star explosions), but the challenge is that for many years cosmic ray origins appeared uniform to observatories examining the entire sky.

A large leap forward in cosmic ray science came in 2017, when the Pierre Auger Observatory (which is spread over 3,000 square kilometers, or 1,160 square miles, in western Argentina) studied the arrival trajectories of 30,000 cosmic particles. It concluded that there is a difference in how frequently these cosmic rays arrive, depending on where you look. While their origins are still nebulous, knowing where to look is the first step in learning where they came from, the researchers said. The results were published in Science.

Cosmic rays can even be used for applications outside of astronomy. In November 2017, a research team discovered a possible void in the Great Pyramid of Giza, which was built around 2560 B.C., using cosmic rays. The researchers found this cavity using muon tomography, which examines cosmic rays and their penetrations through solid objects.

While cosmic rays were only discovered in the 1900s, scientists knew something mysterious was going on as early as the 1780s. That’s when French physicist Charles-Augustin de Coulomb — best known for having a unit of electrical charge named after him — observed an electrically charged sphere suddenly and mysteriously not being charged any more.

At the time, air was thought to be an insulator and not an electric conductor. With more work, however, scientists discovered that air can conduct electricity if its molecules are charged or ionized. This would most commonly happen when the molecules interact with charged particles or X-rays.

But where these charged particles came from was a mystery; even attempts to block the charge with large amounts of lead were coming up empty. On Aug. 7, 1912, physicist Victor Hess flew a high-altitude balloon to 17,400 feet (5,300 meters). He discovered three times more ionizing radiation there than on the ground, which meant the radiation had to be coming from outer space.

Among the products of these star explosions are gamma-ray photons, which (unlike cosmic rays) are not affected by magnetic fields. The gamma-rays studied had the same energy signature as subatomic particles called neutral pions. Pions are produced when protons get stuck in a magnetic field inside the shockwave of the supernova and crash into each other.

In other words, the matching energy signatures showed that protons could move at fast enough speeds within supernovas to create cosmic rays.

Cosmic rays constantly rain down on Earth, and while the high-energy “primary” rays collide with atoms in the Earth’s upper atmosphere and rarely make it through to the ground, “secondary” particles are ejected from this collision and do reach us on the ground.

But by the time these cosmic rays get to Earth, it’s impossible to trace where they came from. That’s because their path has been changed as they travelled through multiple magnetic fields (the galaxy’s, the solar system’s and Earth’s itself.)

Scientists are trying to trace back cosmic ray origins by looking at what the cosmic rays are made of. Scientists can figure this out by looking at the spectroscopic signature each nucleus gives off in radiation, and also by weighing the different isotopes (types) of elements that hit cosmic ray detectors.

The result, NASA adds, shows very common elements in the universe. Roughly 90 percent of cosmic ray nuclei are hydrogen (protons) and 9 percent are helium (alpha particles). Hydrogen and helium are the most abundant elements in the universe and the origin point for stars, galaxies and other large structures. The remaining 1 percent are all elements, and it’s from that 1 percent that scientists can best search for rare elements to make comparisons between different types of cosmic rays. The Pierre Auger Observatory collaboration found some variations in the arrival trajectories of cosmic rays in 2017, providing some hints about where the rays could have originated.

Scientists can also date the cosmic rays by looking at radioactive nuclei that decrease over time. Measuring the half-life of each nuclei gives an estimate of how long the cosmic ray has been out there in space.

In 2016, a NASA spacecraft found most cosmic rays likely come from (relatively) nearby clusters of massive stars. The agency’s Advanced Composition Explorer (ACE) spacecraft detected cosmic rays with a radioactive form of iron known as iron-60. Since this form of cosmic ray degrades over time, scientists estimate it must have originated no more than 3,000 light-years from Earth — the equivalent distance of the width of the local spiral arm in the Milky Way.

An experiment called ISS-CREAM (Cosmic Ray Energetics and Mass) launched to the International Space Station in 2017. It is expected to operate for three years, answering questions such as whether supernovas generate most cosmic ray particles, when cosmic ray particles originated, and if all the energy spectra seen for cosmic rays can be explained by a single mechanism. The ISS also hosts the CALorimetric Electron Telescope (CALET), which searches for the highest-energy types of cosmic rays. CALET launched there in 2015.

Cosmic rays can also be detected by balloon, such as through the Super Trans-Iron Galactic Element Recorder (SuperTIGER) experiment that includes participation from NASA’s Jet Propulsion Laboratory and several universities. It has flown several times, including a record 55-day flight over Antarctica between December 2012 and January 2013. “With the data from this flight we are studying the origin of cosmic rays. Specifically, testing the emerging model of cosmic-ray origins in OB associations, as well as models for determining which particles will be accelerated,” the SuperTIGER website said.

Citizen scientists can also participate in the search for cosmic rays by registering at the website crayfis.io. There, they will join the CRAYFIS experiment run by the Laboratory of Methods for Big Data Analysis (LAMBDA) at the National Research University Higher School of Economics in Russia. Researchers there are examining ultra-high energy cosmic rays using mobile phones.

Earth’s magnetic field and atmosphere shields the planet from 99.9 percent of the radiation from space. However, for people outside the protection of Earth’s magnetic field, space radiation becomes a serious hazard. An instrument aboard the Curiosity Mars rover during its 253-day cruise to Mars revealed that the radiation dose received by an astronaut on even the shortest Earth-Mars round trip would be about 0.66 sievert. This amount is like receiving a whole-body CT scan every five or six days.

A dose of 1 sievert is associated with a 5.5 percent increase in the risk of fatal cancers. The normal daily radiation dose received by the average person living on Earth is 10 microsieverts (0.00001 sievert).

The moon has no atmosphere and a very weak magnetic field. Astronauts living there would have to provide their own protection, for example by burying their habitat underground.

Mars has no global magnetic field. Particles from the sun have stripped away most of Mars’ atmosphere, resulting in very poor protection against radiation at the surface. The highest air pressure on Mars is equal to an altitude of 22 miles (35 kilometers) above the Earth’s surface. At low altitudes, Mars’ atmosphere provides slightly better protection from space radiation.

In 2017, NASA made some upgrades to its Space Radiation Laboratory (located at the Brookhaven National Laboratory in New York) to do more studies into how cosmic rays may affect astronauts on long voyages, including to Mars. These upgrades allow researchers to alter types of ions, and the intensity of energy, more easily due to software control.