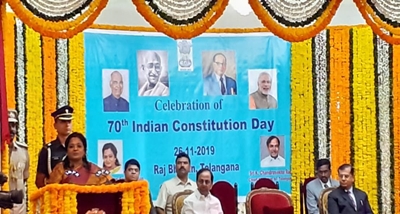 (PTI) Hailing the Constitution and its maker, Telangana Governor Tamilisai Soundararajan on Tuesday said it gives protection to each and every citizen.

“The Constitution is not only complete – the procedure of our country, the law, and order…the rules to be followed – but also gives protection to each and every citizen. That is the beauty of it,” she said during the celebration of the Constitution Day organized at the Raj Bhavan here.

The architect of the Constitution Dr. B R Ambedkar did an excellent job in preparing it, she said.

She said she favored making the youth aware of it.

Chief Minister K Chandrasekhar Rao said the Constitution gives complete freedom in meeting the aspirations of the people and called for rededication to the spirit of the Constitution.

Telangana High Court Chief Justice R S Chauhan stressed on rededicating to the cause of rebuilding the nation instead of paying lip service to the Constitution.

“It is, indeed, very easy to chant the preamble of the Constitution like a mantra, but the tough task is that each one of us has to translate it into reality for our people,” he said.

“Instead of paying lip service to the Constitution, we must rededicate ourselves to the task of rebuilding our nation. This is the responsibility given to us by our founding fathers,” he said.

He said, “it is our solemn duty to live up to the expectations of our people in Telangana which has emerged as a separate state after a struggle.”

He found fault with the opposition parties in boycotting the joint sitting of Parliament to mark Constitution Day.

Opposition parties boycotted to protest political developments in Maharashtra following the governor’s decision to have sworn in BJP’s Devendra Fadnavis as the state’s chief minister.

The government celebrates November 26 as the Constitution Day as it was on this day in 1949 that the Constitution was adopted, and, thereafter, came into force on January 26, 1950, marking the beginning of India as a republic.