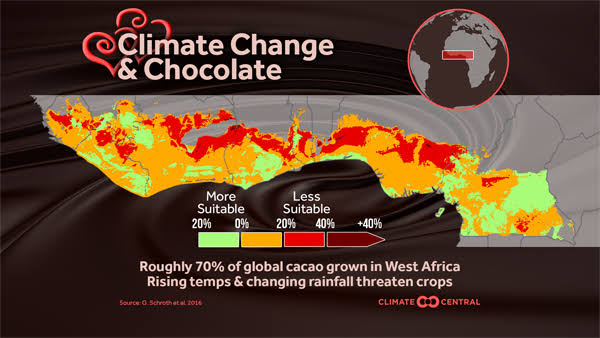 Major chocolate companies have failed to keep a promise they made a year ago to stop forests in West Africa being destroyed for cocoa production, a campaign group said on Friday.

Companies from Mars to Hershey to Barry Callebaut joined the governments of Ivory Coast and Ghana to launch the Cocoa and Forests Initiative last year, pledging to eliminate the production and sourcing of cocoa from protected forests.

But satellite images of Ivory Coast’s southwest cocoa-growing region showed about the same amount of forest had been lost in the 12 months since the pledge was made as in the previous year, campaign group Mighty Earth said in a report.

“I would have expected to see some deforestation continue, because it’s very hard to transform an entire industry overnight, but I did not expect to see it continue exactly the same as before,” said the report’s author, Etelle Higgonet.

But stopping it is a challenge since the cocoa grown on that land provides livelihoods for hundreds of thousands of farmers and their families.

Land is scarce, so poor farmers often expand into forests or parks to raise their incomes, experts say.

This put it on track to reach about the same figure as last year – 14,827 ha – by November, Higgonet said.

The group was not able to obtain data as precise from Ghana, but observed a similar lack of change there, she added.

The World Cocoa Foundation (WCF), the industry group behind the Cocoa and Forests Initiative, said recent reports show there has been progress in national parks and classified forests.

“Our immediate priority has been to stop deforestation in the most ecologically important and environmentally sensitive areas, and we are encouraged to see positive results in less than one year,” said WCF president Richard Scobey.

Most of the recent deforestation hotspots are in rural areas outside protected forests, which is legal but still environmentally damaging, he told the Thomson Reuters Foundation.

Ivory Coast has estimated 40 percent of its cocoa comes from protected areas.

“I feel like people are taking me for a fool. Because if you do the math … somebody’s buying it,” said Higgonet.