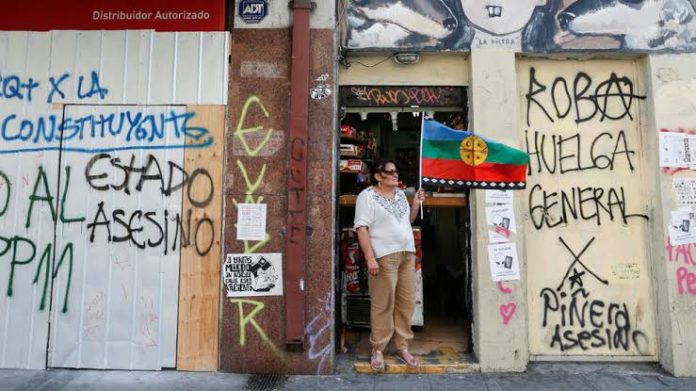 Chile’s stock exchange posted its biggest daily gain in 11 years after lawmakers agreed on Friday to hold a referendum on replacing the country’s dictatorship-era constitution, bowing to protesters furious over inequality and social injustice.

The deal, struck in the early hours of the morning, also boosted the Chilean peso following its slide earlier this week to a historic low that prompted concerns of a recession.

Protests have raged for a month in the South American nation, once the region’s most stable economy. Riots, arson and looting have paralyzed Santiago, a city of 6 million, crippling its bus and metro system. The unrest has wrought billions in damages to both private business and public infrastructure. More than 20 people have died in the chaos.

Chile’s existing constitution, which dates back to General Augusto Pinochet’s 1973-1990 military dictatorship, early on became a lightning rod for anger. Many Chileans say it is rigged in favor the rich.

Voters in April 2020 will be asked whether they approve the idea of a new constitution and whether current lawmakers should serve on the commission that would redraft the document.

The two-page “Agreement for Peace and a New Constitution,” signed after intense negotiations, calls for a “commitment to re-establish peace and public order in Chile.”

Hours after the deal was announced, a group of neighbors draped a white cloth with the message “Peace” over a statue of a Chilean general in Plaza Italia, the city’s central square.

The plaza has been the focal point of often violent clashes between security forces and protesters. It was quiet for much of Friday, though small groups had gathered there by early evening.

Political observers hailed the agreement as an important step – but perhaps not enough to end the protests all together.

“The agreement is unlikely to represent a magic bullet,” according to Nicholas Watson, a political risk analyst with global advisory firm Teneo.

Watson said in an investor’s note that the Chilean government would also need to move to quell growing concerns over human rights abuses amid the protests.

Center-right President Sebastian Pinera has already called for a raft of social and economic reforms, from boosting the minimum wage to topping off the pensions of the lowest earners.

Many blame the country’s 1980 Constitution for simmering social and economic inequalities, saying the much-revised document still fails to guarantee proper healthcare, education and the participation of citizens in government.

Opponents of an overhaul say the charter has been a pillar of stability for Chile, among the region’s strongest and most investor-friendly economies.

The details will be worked out by a constitutional convention whose composition will be determined in the April referendum. A second vote, in October 2020, will let voters select those who will serve on the convention.

A final vote on the draft itself will be obligatory for all voting age Chileans, according to the agreement.