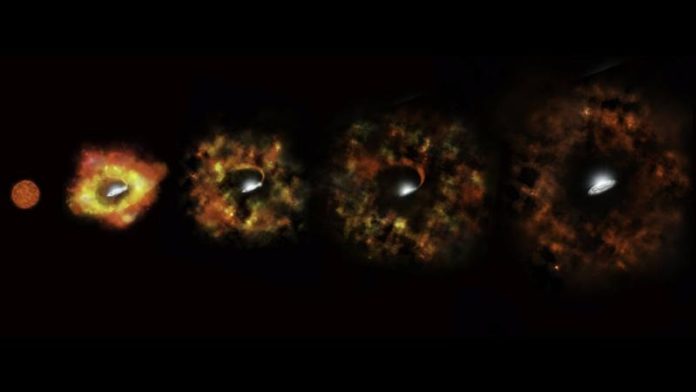 Most dying stars go out with a bang — a supernova, more specifically. But scientists recently observed a star that went out with a whisper, skipping the supernova phase and going straight into a black hole. The discovery not only teaches us more about stars, but it could also uncover the mysteries behind some of the universe’s most massive black holes.

Scientists at Ohio State University have, for some time, been watching a galaxy 22 million light-years away. That galaxy, called NGC 6946 and nicknamed the “Fireworks Galaxy,” sees a large number of supernovae that scientists observe via the help of the Large Binocular Telescope (LBT).

In 2009, scientists noticed that one star, N6946-BH1, was beginning to weaken. In 2015, it disappeared — no big flash, no epic supernova. The scientists concluded that it had instead become a black hole, something that scientists usually believe can only happen after a supernova. Scientists aptly called this unusual trajectory a “massive fail,” and published their results in the Monthly Notices of the Royal Astronomical Society.

“The typical view is that a star can form a black hole only after it goes supernova,” said Ohio State astronomy professor and study researcher Christopher Kochanek in the press release. “If a star can fall short of a supernova and still make a black hole, that would help explain why we don’t see supernovae from the most massive stars.”

The doomed star, named N6946-BH1, was 25 times as massive as our sun. It began to brighten weakly in 2009. But, by 2015, it appeared to have winked out of existence. By a careful process of elimination, based on observations researchers eventually concluded that the star must have become a black hole. This may be the fate of extremely massive stars in the universe.

What This Could Tell Us About Black Holes

Scientists still don’t know how often stars go through massive fails, but researcher Scott Adams predicts that it occurs in about 10 to 30 percent of massive stars.