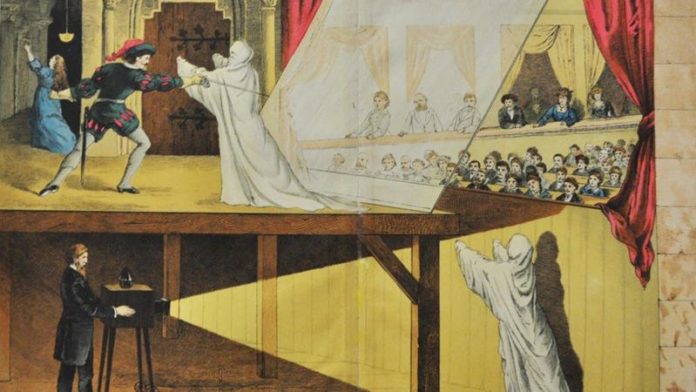 When you think of augmented reality, you probably think of smartphones and video game consoles — the kind of advanced technology that can place an imaginary figure in just the right way to make it appear as if it really exists in your surroundings. In fact, augmented reality is nothing new. As far back as the 16th century, people were documenting ways to fool audiences into seeing things that weren’t there. Even more surprising? You’ve most likely encountered some of that centuries-old technology today.

A Bloke and Mirrors

Imagine you’re a citizen of Naples in the mid-1500s. The Scientific Revolution is just gaining steam, and it seems like every day you’re hearing about a new invention or discovery. Even in that context, it would likely still be astonishing when you enter a darkened room to see the ghostly apparition of a statue — an apparition that couldn’t possibly be there, and yet one that you can see as plain as day. While we don’t have evidence that anyone actually created this illusion in the real world of the 16th century, it’s certainly possible as the scholar and polymath Giambattista Della Porta wrote about it in 1558.

The key to Della Porta’s illusion was a piece of transparent glass that had a mirror finish on one side so that with the right lighting you could both see through it and see what it reflected. You’d place that glass at an angle between the spectator and the room they’re looking at so that the angled glass reflected a second room the spectator couldn’t see. Once you illuminate a statue, person, or any other object in that second room, their reflection would appear on the glass and make it look like they were actually in the first room — but with a ghostly glowing appearance, since the illumination wouldn’t spread to anything that really exists in the room you’re looking at.

It wasn’t until 200 years later, however, that this illusion really had its heyday. In the late 1850s, engineer Henry Dircks described something nearly identical to the British Association for the Advancement of Science, although this time in the context of a stage production. Dircks’ version put an actor in a hidden chamber underneath the audience and illuminated him with the limelight, a 19th-century form of stage lighting. A pane of reflective glass would sit on the stage at a downward angle to reflect the actor, who would appear as though he was moving around on stage. Dircks never used his design in a theatre, but he did exhibit a working model.

If the fact that we now call this trick “Pepper’s ghost” is any indication, the man who had the greatest success with it was the chemist John Henry Pepper. He made improvements to Dircks’ design, most notably by lying the hidden actor down on a slope at the same angle as the mirror to correct for any distortions. Pepper’s illusion became popular in theatre stages where ghostly skeletons would haunt murderers who, try as they might, could never wound them with the thrust of a sword. But eventually, it fell out of favor in drama and shifted to the sideshow circuit. One popular format was the “girl to gorilla” illusion, where a woman in a cage would transform into a gorilla and break through the bars to the thrill of the spectators in the room.

Nothing New Under the Sun

These days, it’s rare to visit a sideshow and even rarer to see Pepper’s ghost in a play. No, if you’ve encountered this illusion, it was likely at Disney’s Haunted Mansion. There, Disney’s Imagineers put Pepper’s ghost into overdrive: In addition to reflecting the images of animatronic characters beneath the riders so they appear as dancers on the ballroom floor, the attraction also places dancing ghosts in the air, reflected from figures directly above the riders’ heads.