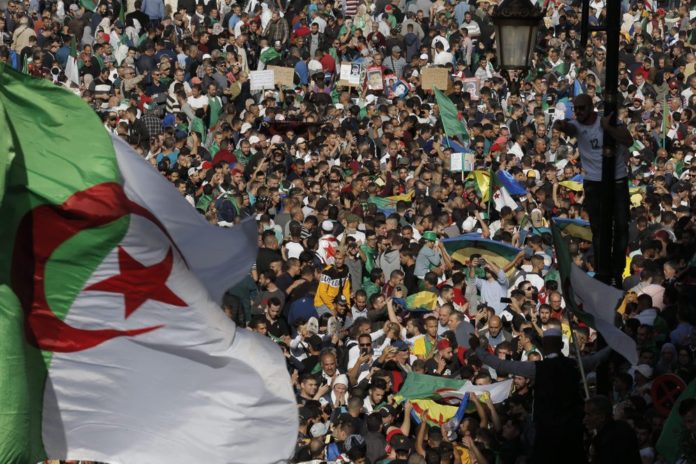 ALGIERS, Algeria (AP) — Algerian police struggled Friday to contain thousands of demonstrators who surged through the capital to protest plans for next month’s presidential election and to celebrate the 65th anniversary of the start of Algeria’s war for independence from France.

Waving Algerian and banned Berber flags, demonstrators urged each other to remain peaceful as police tried to push them off sidewalks or clear them out of a central square. An unusually large crowd turned out for the 37th such protest since their pro-democracy movement began in February and changed the political landscape of this gas-rich North African country .

Thousands came from other towns to join the protest in Algiers, some demonstrating peacefully in the streets overnight. In their homes, many residents banged on pots and pans to show support. The visitors then rested with friends or family and reconvened Friday morning to march through the capital.

The protesters’ anger focuses on the Dec. 12 presidential election to replace longtime President Abdelaziz Bouteflika after he was pushed out in April. The pro-democracy protesters fear the vote will be manipulated by the country’s long-despised, army-dominated power structure.

They want an eventual national election and brand-new leadership, but don’t want a vote organized by existing authorities, who they see as corrupt and out of touch.

“Dump the generals in the garbage!” shouted some demonstrators.

That was a reference to the powerful army chief Gen. Ahmed Gaid Salah, who helped push out Bouteflika but is part of the post-war political system that demonstrators want to change.

The problem is that protesters have no single vision of how best to change Algeria.

Some want a political transition period with a collective leadership involving none of the current political elite, and then a new constitution, and only after that a presidential election.

Algeria’s acting leader Abdelkader Bensalah, speaking Thursday night on national television, dismissed opponents of the Dec. 12 election as a “minority” and said authorities would prosecute anyone who tries to disrupt the vote.

The war that began Nov. 1, 1954, over France’s most treasured colony took six years and left scars on the two nations relations that remain to this day. Algeria gained independence on July 5, 1962.