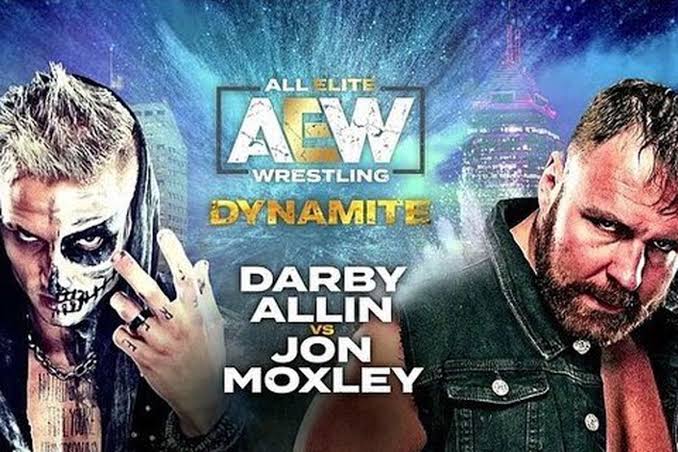 Here are the full results for the November 20th, 2019 edition fo AEW Dynamite.

Fenix is able to get a series of kicks on Nick in the corner, stunning him entirely. He then takes him from the top rope, and hits the Fenix Driver for the win.

After the match, Nick Jackson offers his hand in respect, but Fenix isn’t having it and he leaves.

Shida hits a series of moves, ranging from Falcon Arrows to running strikes, but Britt is able to kick out. Eventually, she gets another running strike on Baker and that’s enough to put her away for the victory.

We get a vignette hyping the Dark Order and their recruiting practice.

Billy Gunn is a surprise entrant in this match. Jimmy Havoc had a staple gun and used it on a few people. During the commercial break, Shawn Spears came out with a chair and took out Joey Janela. In the end, the final two superstars are Hangman Page and MJF after MJF hides and takes out Jungle Boy. Next week, they will fight for the Diamond Ring.

Chris Jericho is out with Jake Hager for his big announcement. Jericho talks about his temper tantrum last week, and he expresses regret over conduct not conducive of a world champion. He tries to say sorry, but he can’t do it. So he tells Hager to say it, and he does.

Chris makes his big announcement and says that next week in Chicago, he’ll get the thank you from AEW executives, TBS Time Warner and everyone watching. Jericho says Chicago has a hockey team and two baseball teams. Next week, Jericho will have a Thanksgiving Thank You celebration. He proclaims it as one of the greatest moments that will ever happen. SCU comes out.

Scorpio Sky says that it takes a real man, a paragon of virtue to apologize when he’s wrong. But, Jericho forgot to mention why he threw that tantrum, because he pinned him. Sky calls it one of the greatest nights ever for him, and even his high school crush is going out with him.

Sky also wants to apologize because he didn’t want to embarrass him. Jericho says he didn’t embarrass him and Melanie has gained a lot of weight since high school. Sky likes big butts and he can’t lie.

Jericho calls Sky is a tremendous competitor as one half of a tag team, but he’s not in Chris Jericho’s league, and he’s the best of all time. Chris says he’s going to have a singles match with him, and he’ll wipe the floor with him.

Kazarian jumps in and says that he’ll need about a month to prepare. Jericho gives him one week. Daniels suggests Sky not challenge for the AEW Title, and Sky says he doesn’t deserve it. Jericho agrees and says he’s not good enough, but gives him a championship match anyway, and makes it official by shaking hands.

Sky says Jericho may not think he has a chance, but Sky has been waiting 15 years for an opportunity like this, and maybe he’ll win, and he’ll turn Le Champion to Le Bitch. SCU, Jericho and Hager all brawl with each other until the rest of the Inner Circle come out. Michael Nakazowa and Brandon Cutler try to help, but to no avail. Eventually, Jericho hits the Judas Effect on Sky.

Marko Stunt and Jungle Boy come out, but both get taken out by Jericho. Then Luchassarus comes out. The rest of the Inner Circle leave the ring, but Hager remains and stares him down. Hager then leaves the ring.

Peter says that he’ll turn him into motor oil before the match, but Luchassaurus dispatches him quickly with a kick and his finisher for the victory.

Private Party vs. Santana and Ortiz

During the match, Santana and Ortiz took turns holding Mark Quen in a standing vertical suplex position, allowing blood to rush to his head. Nick Jackson comes out to take away the slapjack that Santana had on him. This distraction allows Private Party to hit the Gin and Juice for the win.

Video with Kenny Omega is here, and he’s benching some small weights. Kenny says he’s not known as a promo guy, but there’s a lot of uncharacteristic things that he does, and he’s lost his marbles lately. He says the reason was his lost to PAC at All Out. Moxley cleaned the scraps, but it was him who started everything.

He’s getting a chance at revenge and to press the reset button, and his journey of redemption will start next week. He guarantees it will be a match we don’t want to miss.

Allin tries to manipulate Moxley’s hands on the top rope, but Moxley responds by biting Allin’s head. He responds by hitting a massive Paradigm Shift from the top rope for the pinfall victory.

AEW Dynamite comes off the air.