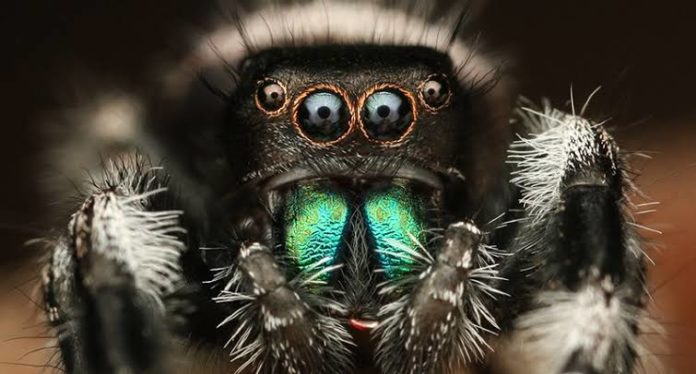 We used a Galaxy S10 Plus and a macro lens to get these great close-up shots of insects and plants. Here are my tips on how to do the same.

Using a macro lens with almost any phone camera, like the iPhone 11, iPhone 11 Pro, Galaxy S10 Plus or Pixel 4, allows you to get up close on incredible details and capture a side of nature you never knew existed. “Macro photography” simply means taking a photo of a subject in extreme close-up so they appear life-size or larger in the resulting image.

Macro photography can make even tiny subjects like garden insects or flower petals look huge on screen or print, and you’ll be amazed at how different such otherwise mundane things look when viewed so close.

Best of all, you don’t need much equipment or have to leave your backyard to get started.

Note that while I’m using a Galaxy S10 Plus to take the images you see in this article, most of these tips will apply to any phone, whether you’re shooting on Android or iPhone.

1. Get a macro lens for your phone

The only thing you need to add to your phone to take macro shots is a macro lens. I use Moment’s macro lens, which attaches to a dedicated Moment phone case. Moment’s lenses are on the pricey side, but they’re made from high-quality glass and are among the best quality around. The cases fit Galaxy S8 ($500 at Best Buy) phones and newer, iPhone 6 and newer, the OnePlus 6, 6T and 7 Pro, and Google Pixels too.

You can also find clip-on macro lenses from companies like Olloclip (Olloclip’s clip system lets you attach lenses to almost any phone). There are a variety available on Amazon for much less, although I can’t speak for the quality.

Crucial to everything is finding a subject that works well in macro. Evidently, you need to think small. Really small.

The natural world is full of possibilities — just search “macro photography” in Google and the image results are dominated by pictures of insects and plant life. The great thing is, trying to find this sort of wildlife to photograph doesn’t mean hopping on a plane to a remote nature reserve.

Your garden or a nearby park will likely be teeming with subject matter. But finding it can be more difficult. My tip is to pay attention to small sections of plants or bushes, looking out for any minibeasts that may be clinging to stalks or hiding under leaves. It can be time consuming, but once you get the hang of how to find them and where they’re more likely to be, it becomes easier.

Remember though, this is their home. So don’t break plants or pull leaves off just to get better shots. Getting a cool picture is not an excuse for destroying a habitat.

If insects aren’t your thing, have a scan for interesting flowers, leaves, rocks, loose feathers or other natural items that might look totally different up close. Even textures on clothing, food or skin can look interesting when magnified in an image.

I almost always shoot in manual mode on my phone when I’m taking artistic images because I have so much more control over how the finished image looks. I also make sure I’m shooting in raw format, which gives me greater control over white balance and colors after I capture a photo and begin editing.

In most Android phones — including the latest Galaxy S10 Plus — you’ll find Pro (manual) mode as an option in the standard camera app. iPhone users will need an app like Moment, which gives you manual control over settings, as well as letting you shoot in raw format. I also tend to use manual focus, which I’ll get to later, and I make sure I have a shutter speed of at least 1/125 to counter as much of the blur from my hands as possible.

When I’m not shooting in manual, I sometimes shoot in the camera’s standard mode. The main reason is because it enables me to use burst mode, which takes multiple photos in quick succession by simply pressing and holding on the shutter button. If an insect is in an awkward position, or is moving around, I’ve found that keeping my finger on the shutter button, firing off tens of photos a second is the best way to capture a good shot.

By doing that, I keep the subject roughly in view while moving the lens in and out slightly. Hopefully, one of the 70 or so images will be nice and sharp.

Most manual modes won’t let you use burst mode. As a workaround in manual mode, I tap as quickly as I can on the shutter button to take more images, thereby increasing the chances that at least one of them will look good. With that method I can shoot upward of 30 individual images of each subject, with maybe only one of them being any good. It’s a hit or miss technique, but the hits are worth the effort!

5. Get the focus right, even without focus stacking

Ensuring your subject is in focus is the trickiest part of the whole task. Professional macro photographers will often use a technique called focus stacking, whereby multiple images at different focus points are combined in post to achieve a fully in-focus subject. That’s difficult to achieve in the field as it requires the subject to remain completely still while the photos are being taken. It’s why, sadly, some macro photographers use dead insects in their work, or ones that have been kept in a fridge to slow their movements and subsequently shoot in a controlled studio.

The Moment macro lens I use gives a brilliant close-up view on an insect, but it also has an extremely narrow plane of focus — meaning that only a slim sliver of the scene is sharp. Focusing on an insect’s eye, for example, will likely mean its body will fall out of focus. While that means it’s challenging to get a crisp shot, your background will also be attractively blurry, and you don’t need to worry quite as much about distracting elements behind your subject.

The technique I used most for this piece involved shooting in the S10 Plus’s manual mode, with manual focus set to its closest focusing point. Afterward, I steadily moved the camera toward the subject until just the part I wanted to look sharp came into focus, and then I took the picture. At that level of magnification, even a tiny shake will throw everything off focus, so it takes a steady hand.

6. Bring in some extra lighting

As with any sort of photography, macro photography relies on great light falling on your subject. But getting that lighting in the right places is tricky. I shot many macro images under the midday sun as the bright light helped bring out the colors of the insects. It also allowed the phone to use the lowest ISO speed possible (resulting in less image noise) and the fastest shutter speed (for sharper images).

But trying to find tiny insects in the foliage means you may well be hunting under bushes or in forested areas where natural light may be scarce. Another issue is that you might block out the sunlight with your phone, since you’ll need to get extremely close to your subject and the best angle may involve casting a shadow.

The latter issue could be helped by simply trying different angles, but I also had great success with bringing in my own lighting. I use the RotoLight Stealth LED ring light, which is battery-powered and can easily fit into a backpack. It’s powerful enough to add a good amount of light onto your subject and its handheld size means you can easily move it around to put the light in the most flattering angle. I also use the more recent Rotolight Neo II, which has a much higher light output, making it better for lighting macro subjects in daylight.

Editing your image is a great way of taking a simple picture and turning it into a truly artistic piece of work. I use Adobe Lightroom on Android to edit my shots, but I also work with Snapseed and VSCO.

Typically I adjust the white balance to get a natural and accurate look to the color (and it’s even easier if you’ve shot in raw). Then I play with the exposure to make sure the highlights aren’t too overpowering and that detail hasn’t been lost in the dark shadows.

I then edit based purely on what I think looks good. I may use an adjustment brush to “paint” more light into the subject to help it stand out, and use a vignette to darken the edges of the frame, thereby drawing the eye more toward the subject in the middle. With nature and wildlife, I want to make sure I’m keeping the subject as natural as possible — I like to enhance the scene, but not alter it — so I avoid dramatically changing colors, or using strong filters.

There’s no right or wrong way to edit, so settle back with a cup of tea and enjoy tweaking those sliders to see what you can achieve with your newly captured set of captivating macro photos.