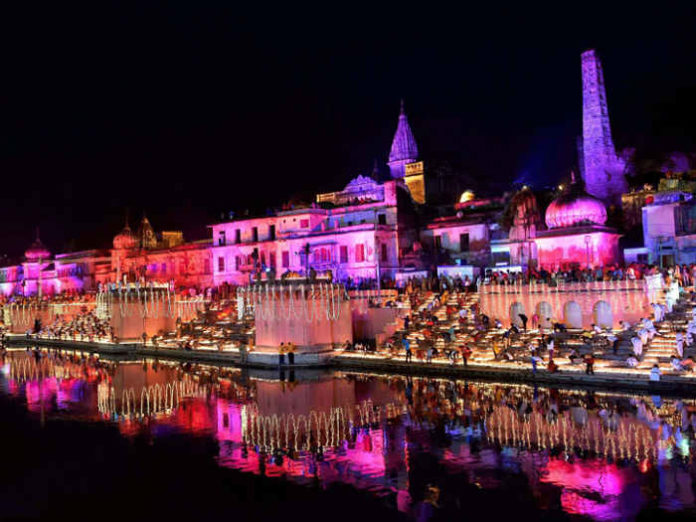 The State Government of Uttar Pradesh led by Yogi Adityanath has granted the status of “state fair” to the upcoming festival of Deepotsav in Ayodhya.

It has decided to sanction a budget of Rs 133 crore to organise the event.

In a cabinet meeting chaired by the Chief Minister, the government also decided to run an audit of the whole event, including the tableaux, in order to stop the misuse of state funds and encourage transparency and accountability.

The Deepotsav is a three-day long festival celebrated in Ayodhya during Diwali. The city is decorated with resplendent lights, earthen diyas and artists are invited from all over the nation to perform.

In the last two years Deepotsav was organised by the Tourism Department of the State would now be a State function, as declared by Governement spokesperson Shrikant Sharma.

Mr Sharma said the state government over 5.51 lakh ‘diyas’ will be lit on October 26 and the event will be graced by the Chief Minister.

Along with Adityanath, Uttar Pradesh Governor Anandiben Patel, Union Minister Pralhad Joshi among others will attend the ‘Deepotsav’ event. The list for foreign dignitaries will also be announced

The Speaker of Parliament of the Republic of Fiji is likely to be the chief guest on the occasion.

Ayodhya Member of Legislative Assembly and Bharatiya Janata Party (BJP) leader Ved Prakash Gupta said that the occasion is a good opportunity to boost tourism in the district.

Previously on 15th October, Chief Secretary of the Uttar Pradesh government RK Tiwari had mentioned that preparations were being made in Ayodhya for the auspicious occasion.

“Administrative officials have taken stock of all the places where celebrations are to take place. On Deepotsav, more than 5.5 lakhs earthen lamps will be lit in Ayodhya. This will be historic as it will involve huge public participation,” Tiwari said.

Tiwari also said that out of the 5.50 lakh lamps, around 4 lakh will be lit at Ram Paidi, while the rest will be lit at other religious locations in the city.

The Principal Secretary Avnish Awasthi and DGP OP Singh had visited the city last week to monitor the ongoing preparations.

In 2018, Ayodhya broke a Guinness World Record by lighting more than three lakh earthen lamps and keeping them lit for at least 45 minutes on the banks of the Saryu river as part of the annual Deepotsav festival held on the holy festival of Diwali.

Starting from  2017, ever since Yogi Adityanath has become the Chief Minister, he has conitnually stepped up the scale of Deepotsav and has presided over the celebrations each time too.

In 2018, South Korea’s first lady Kim Jung-Sook was invited as the chief guest.

In the previous years of celebrations under the BJP state government it has featured illumination of various temples and monuments, shobha yatras of Ramlila performances, a maha aarti at the ghats of the Saryu river, street lighting, fireworks display on the river and lighting of thousands of earthen lamps.

It was reported that this year Deepotsav will feature the stage at the amphitheatre-style Ram Katha Park which will imitate the “courtroom of a grand palace” where the symbolic rajya abhishek (coronation) of Lord Ram, Sita and Lakshman will be done followed by their aarti by the chief minister and Ramlila performances.

Other than the said events, a ‘Ram Darbar’ will be erected at the Ram Ki Paidi ghat, where diyas will be lit and the event.

Diwali is one of the most auspicious as well as popular festivals on the calender not only for Hindus, but also for Sikhs, Jains and Buddhist celebrated over a period of five days not only in India but by the Indian diaspora all over the world.

It marks the return of Lord Rama to Ayodhya after 14 years of exile in duration of which he defeated the mammoth army of the Demon king of Lanka, Ravana.