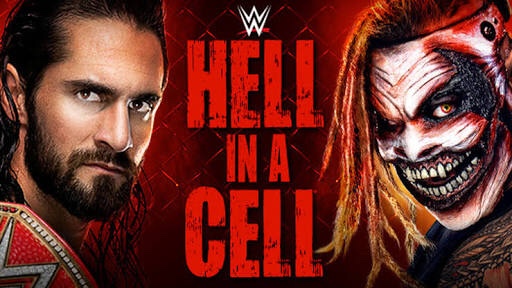 Welcome to the Hell in a Cell PPV! We get an intro video package to hype the matches that will be taking place tonight. Our opening contest is…

They brawl outside of the cell before moving things inside. Lynch grabbed a chain from the door and hit Banks with it a few times then locked the door. Lynch sent her into the cage and pulled out a table. Lynch hit her in the face and back with a chair as Banks pulled out a ladder. Lynch hit a suplex then tossed her into the cage with two baseball slides. Banks with a knee strike off the apron sending Lynch into a ladder.

Banks put her left arm inside of the door and rammed it a few times. Banks connected with a knee strike off the middle rope sending Lynch crashing on a chair. Lynch fought back and tossed her into the cell. Lynch tripped her and sent her face first twice into a chair for a near fall. Lynch with a drop kick off the middle rope with a chair.

Banks hit a series of times with a kendo stick. They did a spot in the corner of the cell where kendo sticks held a chair up with Banks on it and Banks hit a drop kick off the apron. Lynch off the top rope with a leg drop for 2. Lynch set up a table that allowed Banks to hit a back breaker. Banks with a dive off the top rope sending Lynch through the table. There was a chair sticking out of the cell and Lynch was sent face first into it. Lynch with a suplex off the top rope onto several chairs and then locked in the Disarmer for the win.

Rowan and Harper got the early jump and beatdown the two babyfaces for several minutes. Harper and Rowan hit Reigns with the steel steps at ringside. Bryan tried to lock in the yes lock on Rowan but Harper broke it up.

Rowan hit a signature suplex to Bryan for 2. Rowan attempted to make a comeback but Rowan tossed him to the floor. Bryan hit a drop kick to both heels then a series of kicks to Harper in the corner. Reigns with the drive bye to Rowan then Harper took out Reigns with an outside dive.

They exposed the apron pads and sent Bryan chest first. Harper and Rowan cleared the announce tables then Rowan knocked Reigns over the barricade when he hit him with a barricade piece. Harper hit a powerbomb off the middle rope for 2. Reigns with a superman punch, Bryan hit the running knee, and Reigns finished it off with a spear in a wild sequence to Harper for the win.

Post-match, Reigns and Bryan hugged it out in the ring.

They had a basic back and forth match. After Orton dominating the early part of the match, Ali started to make a comeback and hit an outside dive over the announce table. Back inside of the ring, Ali hit a rolling facebuster for 2. Ali hit a spring board DDT before he went to the top rope. Ali missed a 450 splash off the top rope. Ali blocked the RKO and rolled him up for 2. Ali with a head kick then went for a rolling move but Orton hit an RKO for the win.

After a brief attack by Asuka, Nikki and Alexa attacked Asuka on the floor. Asuka fought back and sent her into the barricade. Sane was tagged in and hit a series of strikes to Bliss. Moments later and some back and forth, Cross went to the top rope where she hit a crossbody to Sane. Asuka got the hot tag and hit a series of strikes to Cross. Asuka spits green mist in the face of Cross and kicked her in the head for the win.

The babyfaces went on the quick attack by keeping the heels off their feet. Things calmed down once Anderson and Gallows took out Strowman and one of the vikings while Styles beatdown Erik in the ring. Moments later, Erik fought back and got the hot tag to Strowman, who cleaned house. Strowman did his running tackles around the ring . Strowman missed a spear and ate the ring post. Styles took out his left knee. Erick broke up a knee submission with a running strike. Viking Raiders took out Gallows and Anderson . Moments later, Anderson and Gallows beat down Strowman causing the DQ.

Corbin got the early heat on Gable with a series of strikes but it was a dead crowd for the most part. Corbin hit a major league clothesline. The fans started to get behind Gable as Corbin continued his attack. Gable fired back and started talking trash. Gable with a rolling german suplex for 2. Corbin countered in the corner with a powerbomb. Gable wrapped Corbin’s leg around the ring  post then rolled him up for 2. Corbin hit Deep Six for 2. Gable hit a moonsault off the top rope for 2. Corbin with a chokeslam to Gable on the apron. Corbin grabbed a scepter but Gable managed to roll him up for the win.

They exchanged strikes to start things off before Bayley went after the left leg of Flair. Moments later, Flair fought back and went after the left knee of Bayley. Flair hit Natural Selection for 2. Flair used the apron to her advantage. Flair hit a moonsault off the top rope for a near fall. Flair locked in the Figure Eight for the win.

Rollins blitzed him with a series of strikes but Wyatt hit a tackle. The red lights from Wyatt’s entrance stayed on during the match. Rollins grabbed a kendo stick and went after Wyatt but Wyatt no sold it. Rollins went for a dive but Wyatt caught him and hit a slam. Wyatt tossed him into the cage then into the steel steps. Wyatt looked under the ring but Rollins hit him a series of times with the steps. Rollins put him on a table and landed a frog splash for a near fall. Rollins hit him with the stomp but Wyatt popped right back up. Rollins went for it again and hit Sister Abigail for a near fall. Wyatt landed a series of strikes. Wyatt tossed him to the floor. Wyatt grabbed a giant hammer and hit Rollins with it. Rollins fired back with a series of super kicks. Rollins hit the stomp to Wyatt on the floor. Rollins hit a series of stomps in the ring, which led to the fans booing Rollins. Rollins hit a botched Pedigree then the stomp for a near fall. Wyatt continues to no sell it. Wyatt with another stomp and another. Rollins hit Wyatt in the head with a chair and only got a one count. Rollins grabbed a ladder and smashed it on Wyatt’s head that also had a chair. Rollins got a toolbox where he smashed it on the head of Wyatt. Rollins grabbed a sledgehammer but the referee tried to talk him out of it. Rollins instead hit him with it and the referee called for the DQ. The cage was raised and the referees checked on Wyatt, who popped up and put him in the claw then hit Sister Abigail on the floor. The fans chanted to restart the match but WWE didn’t and the show went off the air.