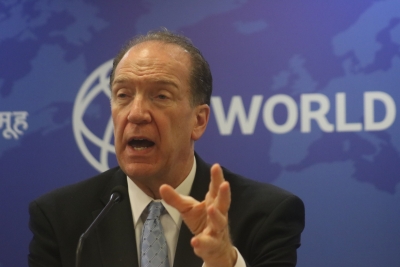 Malpass, who is on a three-day visit to India, earlier met Prime Minister Narendra Modi, Finance Minister Nirmala Sitharaman and members of the Niti Aayog and discussed financial sector reforms with them as well.

“We (Malpass and Modi) discussed the ways in which the financial sector can move forward. The Indian financial sector has made quite a bit of progress. It has made progress in terms of monitoring of assets, the bankruptcy process and the deepening of the banking system.

“I am looking forward to encouraging progress in three primary areas — to allow the growth of the banking sector, including the private sector; allow and encourage deepening of capital market bonds, mortgages; and the third is regulations for NBFCs which have grown in importance in the Indian financial system, but entails some risks.

“Having sound regulations for NBFCs, which is vital to India’s overall growth, will help India’s financial sector. Prime Minister Modi has the goal of a $5 trillion economy. That’s a powerful vision that needs to be assisted by innovations in the financial sector,” Malpass said during the media interaction.

The NBFCs have caused credit squeeze in the financial sector. Default in IL& FS bonds sparked a liquidity squeeze that spread to other NBFCs. It led to the credit squeeze, over-leveraging, excessive concentration and a massive mismatch between assets and liabilities. The government has since been observing the sector quite closely.

“My prescription is that openness to reforms and innovations, and improvements in the government structures will allow for faster growth. India has undertaken important reforms in the last few years,” he noted.

Replying to a query as to whether demonetization has caused lower growth in India, the World Bank chief said, “Economists made lots of forecasts… They were saying India has been affected by the global environment and has slowed from the higher past growth rates and it is very much related to the slowdown in global growth.”

Recently the World Bank sharply cut India’s growth forecast for the current fiscal to 6 percent, down from the 7.5 percent forecast it made in April.

Malpass said the main policy challenge for the country is to address the sources of softening private consumption and the structural factors behind the weak investment.

He also said that the possibility of setting up fast track courts for dispute resolution should be considered.

To modernize land management, India could digitize land records, which will facilitate quick transactions, he said.

Malpass also said that global trade uncertainty, Britain”s plans of leaving the European Union and the low investment rate in the world were among the factors affecting growth.

“I think what is to be done is to have better growth programs country by country,” he said.

Malpass said the World Bank will continue with the $6 billion lending target for India. Ninety-seven projects are currently being executed with loan assistance from the World Bank in India.

“The World Bank right now has 97 projects in India with a commitment of $24 billion. We expect the programs to continue,” he said.

The government recently cut the effective corporate tax rate from 35 percent to 25 percent and those not availing any other incentive will have an effective tax rate of 22 percent.