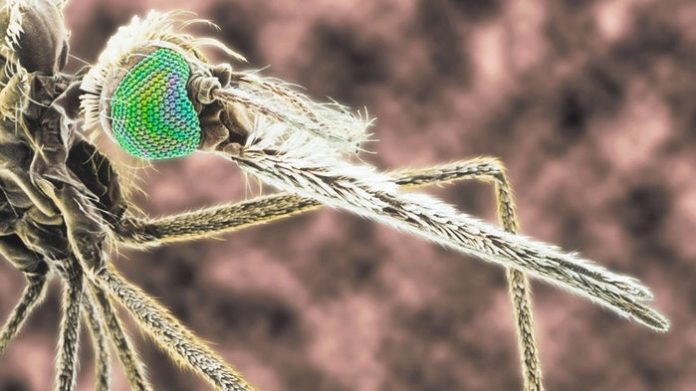 Conventional scientific wisdom has long held that mosquitoes have a limited range: They fly low to the ground and typically travel less than 5 kilometers during their brief lifetimes. Now, researchers have turned that wisdom on its head. In the Sahel, the semidesert region just south of the Sahara Desert, malaria-bearing mosquitoes are borne on winds that allow them to travel hundreds of kilometers—and as high as 290 meters above the ground—in a single night.

The findings, published today, help explain why mosquito populations can surge so suddenly—and mysteriously—in the Sahel. They also have big implications for efforts to eliminate malaria from entire countries or regions. Long-distance travel by mosquitoes could increase the risk of malaria reintroduction after it has been eliminated in a particular place. Mosquito flights could also aid the spread of insecticide-resistant mosquitoes and drug-resistant parasites.

“This is simply amazing and completely groundbreaking. This study is imaginative and unprecedented, completely changing our understanding of malaria vector ecology and gene flow,” says Gerry Killeen, a mosquito ecologist at the Ifakara Health Institute in Tanzania and the Liverpool School of Tropical Medicine in the United Kingdom, who was not involved with the project. “I’ll never look at my data in quite the same way!”

Researchers from the National Institute of Allergy and Infectious Diseases (NIAID) in Bethesda, Maryland, the University of Bamako, and elsewhere had been studying mosquito ecology in four villages in central Mali for 10 years. In 2014, they published a population dynamics study, also in Nature, containing strong evidence that at least one malaria-carrying mosquito species is a long-distance traveler, abandoning the Sahel during the dry season.Spurred by this discovery, NIAID mosquito ecologist Tovi Lehmann and his team went hunting. They used helium balloons to hoist vertical sticky nets between 40 meters and 290 meters above the ground in the four villages on 617 different nights between 2013 and 2015.

They captured 461,000 insects including 2748 mosquitoes, 235 of which were Anopheles, the genus that carries malaria parasites.The mosquito harvest grew larger with the height of the sticky nets, suggesting the insects may migrate at even higher altitudes. More than 80% of the captured mosquitoes were female, the sex that bites people and spreads malaria. And of these, 90% had taken a human blood meal before traveling, meaning they could have been exposed to malaria parasites.

The scientists weren’t sure where the mosquitoes came from or how far they had traveled. But they used meteorological modeling tools to calculate possible travel trajectories, taking into account wind direction and speed. Assuming the insects ascend on their own, before being borne along on the wind, a mosquito might travel as far as 295 kilometers in a single, 9-hour nocturnal journey, they report today.The scale of the migrations is “massive,” the authors conclude: They estimate that each year, more than 50 million mosquitoes capable of carrying malaria traversed an imaginary 100-kilometer line perpendicular to the prevailing wind in the study region.

Although the team hoisted its nets from March to November, they caught mosquitoes only between the wet season months of July and November, with peak captures between August and October. This offers an answer to a long-standing riddle: How can mosquito populations persist in the Sahel? The researchers say the seasonal pattern of high-altitude winds could transport the insects from wetter sites to the south, where mosquitoes can live year-round, and return them to those sites during the Sahel’s dry season, when the prevailing winds blow in the other direction.

The scientists did not find malaria parasites in a single mosquito, however. That’s not so strange, they say, because they captured only 235 Anopheles mosquitoes, and studies suggest mosquito infection rates in the region are between 0.1% and 5%. Although the study does suggest malaria parasites are transported during long-distance air travel, researchers “didn’t show it directly,” says Nora Besansky, who studies the genomics of malaria-transmitting mosquitoes at the University of Notre Dame in South Bend, Indiana. Further studies may find what the researchers missed or find that infected mosquitoes are somehow unable to migrate long distances, she speculates. Either way, she adds, the paper is “transformative.”Lehmann himself notes that the implications go beyond malaria control. He says there’s a “high probability” that migrating mosquitoes carry with them other important pathogens, such as the virus that causes Rift Valley fever.

Alessandra della Torre of Sapienza University of Rome, who studies how mosquito genetics and ecology affect malaria in sub-Saharan Africa, agrees. “This is a breakthrough paper with critical public health implications,” she says. The scientists, she adds, “performed a study which nobody else thought could be performed to test a working hypothesis that nobody else dared to make.”