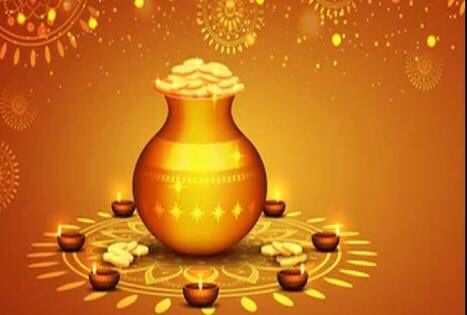 Dhanteras, also known as Dhanatrayodashi or Dhanvantari Trayodashi, is the first day that marks the festival of Diwali in India.

Dhanteras is a Hindu festival celebrated in India on the thirteenth lunar day of Krishna Paksha (dark fortnight) in the Vikram Samvat Hindu calendar month of Karthik. Dhanvantari, who is also worshipped on the occasion of Dhanteras, is considered the God of Ayurveda who imparted the wisdom of Ayurveda for the betterment of mankind, and to help rid it of the suffering of disease.

The Indian ministry of Ayurveda, Yoga and Naturopathy, Unani, Siddha and Homoeopathy, announced its decision to observe Dhanteras, as the “National Ayurveda Day”, which was first observed on 28 October 2016.

Vasubaras marks the beginning of the celebration of Diwali festival. On Vasubaras, the Cow and her calf are worshipped. The Cow holds a very sacred place in the Vedic Mythology. Referred to as “Gau Mata”, she is worshipped and nurtured with the utmost respect. “Gau Mata” and her Prasad “Pancha Gavya”, or “Panchamrut”, are frequently used in all Hindu celebrations. Vasubaras is followed by Dhanteras.

The festival is celebrated as “Lakshmi Puja”Which is performed in the evenings when of candles clay are lit. Bhajans, devotional songs in praise of Goddess Lakshmi, are sung and “Naivedya” of traditional sweets is offered to the Goddess. A peculiar custom in Maharashtra exists where people lightly pound dry coriander seeds (Dhane in Marathi for Dhanatrayodashi) with jaggery and offer the mixture as Naivedya.

Dhanteras is the worship of lord Dhanvantari. Lord Dhanvantari, according to Hindu History, emerged during Samudra Manthan, holding a Kalasha full of Amrit (an Ayurvedic herbal mix) in one hand and the sacred text about Ayurveda in the other hand. He is considered to be the Vaidya of Gods.

On Dhanteras, homes that have not yet been cleaned in preparation for Diwali are thoroughly cleansed and whitewashed, and Lord Dhanvantari, the god of health and ayurveda, is worshiped in the evening. The main entrance are decorated with colorful lanterns, holiday lights and traditional motifs of Rangoli designs are made to welcome the Goddess of Wealth and Prosperity. To indicate her long-awaited arrival, small footprint’s are drawn with rice flour and vermilion powder all over the houses. On the night of Dhanteras, diyas (lamps) are ritually kept burning all through the nights in honor of Lakshmi and Dhanvantari.

On this day, Hindus consider it as an extremely auspicious day to make new purchases, especially gold or silver articles and new utensils. It is believed that new “Dhan” (wealth) or some form of precious metal is a sign of good luck. In modern times, Dhanteras has come to be known as the most auspicious occasion for buying gold, silver and other metals especially kitchenware. The day also sees heavy purchases of appliances and automobiles.

On this night, the lights are set out every night both in the sky lamps and as offerings at the base of a Tulsi plant and also in the form of diyas, which are placed in front of the doorways of homes. This light is an offering to Yama, the Host of Death, to avert untimely death during the time of the Diwali festival. This day is a celebration aimed at increasing wealth and prosperity. Dhanteras engages themes of cleansing, renewal, and the securing of auspiciousness in the form of Lakshmi.

In the villages, cattle are adorned and worshiped by farmers as they form the main source of their income.

In South India (especially Tamil Nadu), women make ‘Marundhu’ which translates into medicine on the eve of Naraka Chaturdasi that is Dhanvantri Trayodashi. The Marundhu is offered during the prayer and eaten in the early morning on Naraka Chaturdasi before sunrise. In fact, many families handover the recipes of Marundhu to their daughters and daughter in law. The Marundhu is consumed to eliminate the imbalance of tridoshas in the body.

According to a hindu history, when the devasand asuras performed the Samudra manthan(churning of the ocean) for Amrita (the divine nectar of immortality), Dhanvantri (the physician of the Gods and an incarnation of Vishnu) emerged carrying a jar of the elixir on the day of Dhanteras.

An ancient history ascribes the occasion to an interesting story about the 16-year-old son of King Hima. His horoscope predicted his death by snake-bite on the fourth day of his marriage. On that particular day, his newly-wed wife did not allow him to sleep. She laid out all her ornaments and lots of gold and silver coins in a heap at the entrance of the sleeping chamber and lit lamps all over the place. Then she narrated stories and sang songs to keep her husband from falling asleep. The next day, when Yama, the god of Death arrived at the prince’s doorstep in the guise of a serpent, his eyes were dazzled and blinded by the brilliance of the lamps and the jewellery. Yama could not enter the Prince’s chamber, so he climbed on top of the heap of gold coins and sat there the entire night listening to the stories and songs. In the morning, he silently went away. Thus, the young prince was saved from the clutches of death by the cleverness of his new bride, and the day came to be celebrated as Dhanteras.

The following day came to be called Naraka Chaturdashi (‘Naraka’ means hell and Chaturdashi means 14th). It is also known as ‘Yamadeepdaan’ as the ladies of the house light earthen lamps or ‘deep’ and these are kept burning throughout the night glorifying Yama, the God of Death. Since this is the night before Diwali, it is also called ‘Chhoti Diwali’ or Minor Diwali.

(Some points taken from wiki)