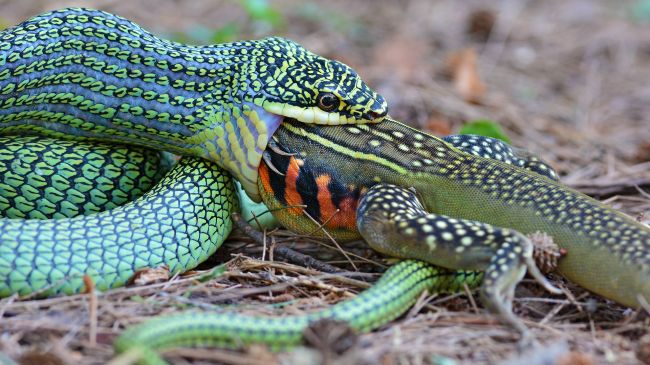 Snakes can gape their jaws wide to gulp down even very large animals.The top suggested searches on YouTube for “snake eats” offer some insight into our fascination with the scary and disgusting. Some of the suggestions are gross (“snake eats frog live”) or hard to imagine (“snake eats porcupine”). Others seem symbolic (“snake eats itself”). But the largest group of suggestions emphasize one theme: size. Anyone with a macabre sensibility and a few minutes to spare can watch a snake scarf down an alligator, a deer, a pig, a crocodile or a cow.

But what’s the largest animal that a snake can devour?

Snakes are extremely successful animals. Except for some islands and the coldest corners of the globe, snakes’ habitats span the planet. They’re also incredibly diverse.

“You can find snakes that eat earthworms, mollusks and large prey, including mammals,” said Julia Klaczko, a zoologist at the University of Brasília in Brazil.

Snakes have an unusual relationship with food. Without the pesky need to produce body heat, a snake can get by on far fewer calories than most other warm-blooded animals its size. Researchers estimated that female snakes can keep themselves alive and reproduce even when consuming less than 3% the amount of prey that a warmblooded animal of similar size would need, according to a study published in 1988 in the journal Oecologia.

Snakes may use their energy efficiently, but they still need to eat. And they lack some traits that other animals use to chow down. Without limbs, a snake can’t hold its meal in place or push the food down its gullet, Klaczko explained. Snakes also lack serrated teeth for ripping and flat teeth for chewing. Swallowing whole is the way to go.

“The ability to eat large prey is not something that only happened one time in snake evolution,” Klaczko said. Though researchers still have some questions about the snake family tree, evidence suggests that different snake lineages have independently evolved similar traits that let them catch, swallow and digest their prey, she said.

Contrary to popular belief, snakes don’t unhinge or dislocate their jaws. Instead, they use a specialized collection of skull bones, ligaments and muscles to open their mouths incredibly wide, allowing a snake to prey on animals that can be significantly larger than the snake itself. The size of this opening, which herpetologists call the “gape,” places an upper limit on the size of prey a snake can eat.

“The snake jaw isn’t attached to the skull — it’s attached to ligaments,” Calhoon said. “They have a very flexible ligament jaw structure that allows them to stretch and open much wider.”

After getting its jaws stretched around a meal, a snake’s next step is to move the prey through the serpentine digestive tract, where digestive juices in the stomach can start breaking down tissues. When eating smaller prey, a snake can use its jaws to push a worm or rodent down its digestive tract, but for larger meals, snakes use bones in their head and jaw to “move forward on the prey,” Klaczko said.

Deer and cattle are among the largest animals snakes have been known to eat. In 2018, a Burmese python in Florida that weighed about 32 lbs. (14 kg) swallowed a young white-tailed deer weighing 35 lbs. (16 kilograms), the biggest prey-to-predator weight ratio ever documented for Burmese pythons — and perhaps for any python species — according to the Conservancy of Southwest Florida. However, the snake later died after regurgitating the deer. And individual variation in the size and shape of prey and the size of a snake’s gape makes it impossible to know for sure which is the largest animal a snake can swallow.

Though humans aren’t at the top of the list, they are among the bigger animals that snakes are known to eat. In 2017, a 25-year-old man was eaten by a reticulated python in Indonesia, National Geographic reported that year. Just last year, an unfortunate 54-year-old woman was apparently killed and eaten by a giant python, also in Indonesia. Luckily, such deaths are extremely rare.

While some snakes eat alligators, cows and people, most snakes are perfectly content with a worm or maybe a mouse, and they play a critical role in maintaining balance in Earth’s food webs and ecosystems, Klaczko said

“Snakes are really important to ecology and equilibrium,” he said.