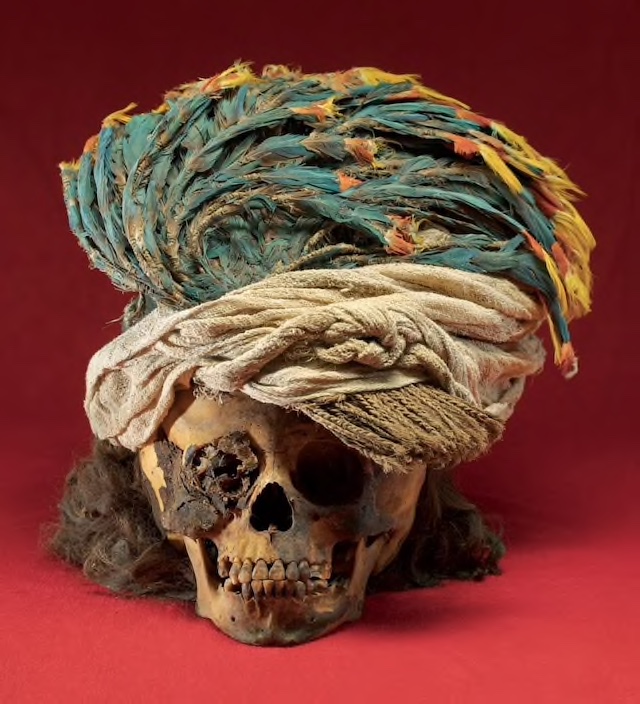 Some 500 years ago, the Chimú in what is now Peru ritually killed hundreds of their young in the largest mass child sacrifice events known in world history. Now archaeologists are trying to understand why.

The young victim lies in a shallow grave in a vacant lot strewn with trash. It’s the Friday before Easter here in Huanchaquito, a hamlet on the north coast of Peru.

The throb of dance music, drifting up from seaside cafés a few hundred yards to the west, sounds eerily like a pulsing heart. It’s accompanied by the soft chuf, chuf of shovels as workers clear away broken glass, plastic bottles, and spent shotgun shells to reveal the outline of a tiny burial pit cut into an ancient layer of mud.

Two college students—archaeologists in training, wearing hospital scrubs and masks—splay on their stomachs on either side of the grave and begin digging with trowels.

The first thing to appear is the crest of a child’s skull, topped with a thatch of black hair. Switching from trowels to paintbrushes, the excavators carefully sweep away the loose sand, exposing the rest of the skull and revealing skeletal shoulders poking through a coarse cotton shroud. Eventually the remains of a tiny, golden-furred llama come into view, curled alongside the child.

Gabriel Prieto, a professor of archaeology from the National University of Trujillo, peers into the grave and nods. “Ninety-five,” he announces. He’s keeping a running tally of victims, and this one, labeled E95, is the 95th dug up since he first began investigating the mass burial site in 2011. The grim count from this and a second sacrifice site nearby will ultimately add up to 269 children between the ages of five and 14 and three adults. All of the victims perished more than 500 years ago in carefully orchestrated acts of ritual sacrifice that may be unprecedented in world history.

“This is something completely unexpected,” exclaims Prieto, shaking his head in bewilderment. The words have become a kind of mantra as the archaeologist and father struggles to make sense of the harrowing discovery at a site called Huanchaquito-Las Llamas. In our time and culture, the violent death of even one child rends all but the most callous hearts, and the specter of mass murder horrifies every healthy mind. And so, we wonder: What desperate circumstances might account for an act that’s unthinkable to us today?

Archaeologists have found evidence of human sacrifice in all parts of the world. Victims may number in the hundreds, and often they’re deemed to have been prisoners of war, or casualties of ritual combat, or retainers killed upon the death of a leader or the construction of a sacred building. Ancient texts, including the Hebrew Bible, attest to the practice of child sacrifice, but clear evidence of mass killings of children is rare in the archaeological record. Until the discovery at Huanchaquito (pronounced wan-cha-KEE-toe), the largest known child sacrifice site in the Americas—and possibly the entire world—was at Templo Mayor in the Aztec capital of Tenochtitlán (modern-day Mexico City), where 42 children were slain in the 15th century.

Prieto grew up in Huanchaco (pronounced wan-CHA-co), the town that encompasses Huanchaquito. As a child, he hunted for beads outside the 16th-century Spanish colonial church that perches on the town’s highest hill. He recalls spending afternoons on the southern edge of town exploring the adobe ruins of Chan Chan, the ancient capital of the Chimú people. At its peak in the 15th century, Chan Chan was one of the largest cities in the Americas, the seat of power for an empire that stretched some 300 miles along the Peruvian coast.

Those childhood experiences inspired Prieto to become an archaeologist, and while earning a doctorate from Yale, he returned to his hometown to excavate a 3,500-year-old temple.

Then in 2011 the owner of a local pizza shop shared startling news: His children—and the neighborhood dogs—were finding human bones sticking out of the sand of a nearby vacant lot. He implored the archaeologist to investigate.

At first Prieto thought the site was simply a long-forgotten cemetery. But after recovering the remains of several children wrapped in shrouds—remains that radiocarbon analysis dated to between A.D. 1400 and 1450—the archaeologist realized that he had stumbled onto a much bigger discovery.

The burials, Prieto noticed, weren’t typical of the Chimú. The children were interred in unusual positions—prone on their backs or curled on their sides instead of sitting upright, as was customary—and they lacked the adornments, pottery, and other grave goods commonly found in Chimú burials.

Instead, many were buried alongside very young llamas and possibly alpacas. As vital sources of food, fiber, and transport, these Andean animals were among the Chimú’s most valuable assets. And finally there was this: Many of the children and animals had visible cut marks across their sternum and ribs.

To help make sense of the clues, Prieto called John Verano, a biological anthropologist and forensic expert at Tulane University. Verano has decades of experience analyzing physical evidence of ritual violence in the Andes, including a 13th-century Chimú massacre of some 200 men and boys at the site of Punta Lobos.