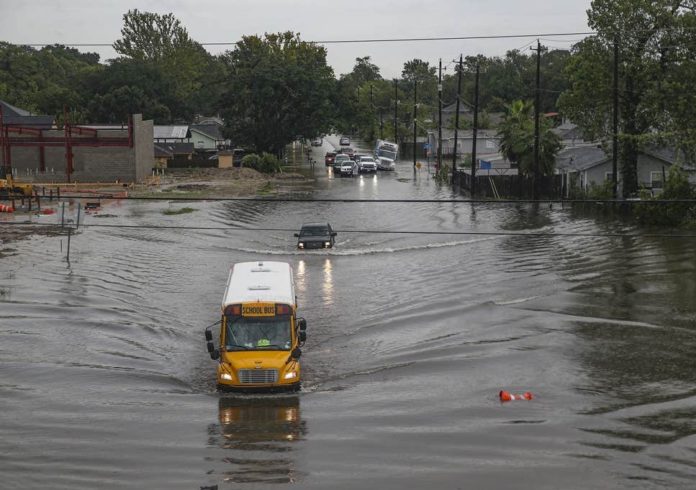 Flood: An overflow of water onto normally dry land. The inundation of a normally dry area caused by rising water in an existing waterway, such as a river, stream, or drainage ditch. Ponding of water at or near the point where the rain fell. Flooding is a longer term event than flash flooding: it may last days or weeks.

Flash flood: A flood caused by heavy or excessive rainfall in a short period of time, generally less than 6 hours. Flash floods are usually characterized by raging torrents after heavy rains that rip through river beds, urban streets, or mountain canyons sweeping everything before them. They can occur within minutes or a few hours of excessive rainfall. They can also occur even if no rain has fallen, for instance after a levee or dam has failed, or after a sudden release of water by a debris or ice jam.

A flood occurs when water inundates land that’s normally dry, which can happen in a multitude of ways.

Excessive rain, a ruptured dam or levee, rapid melting of snow or ice, or even an unfortunately placed beaver dam can overwhelm a river, spreading over the adjacent land, called a floodplain. Coastal flooding occurs when a large storm or tsunami causes the sea to surge inland.

Most floods take hours or even days to develop, giving residents time to prepare or evacuate. Others generate quickly and with little warning. So-called flash floods can be extremely dangerous, instantly turning a babbling brook or even a dry wash into rushing rapids that sweep everything in their path downstream.

Climate change is increasing the risk of floods worldwide, particularly in coastal and low-lying areas, because of its role in extreme weather events and rising seas. The increase in temperatures that accompanies global warming can contribute to hurricanes that move more slowly and drop more rain, funneling moisture into atmospheric rivers like the ones that led to heavy rains and flooding in California in early 2019.

Meanwhile, melting glaciers and other factors are contributing to a rise in sea levels that has created long-term, chronic flooding risks for places ranging from Venice, Italy to the Marshall Islands. More than 670 U.S. communities will face repeated flooding by the end of this century, according to a 2017 analysis; it’s happening in more than 90 coastal communities already.