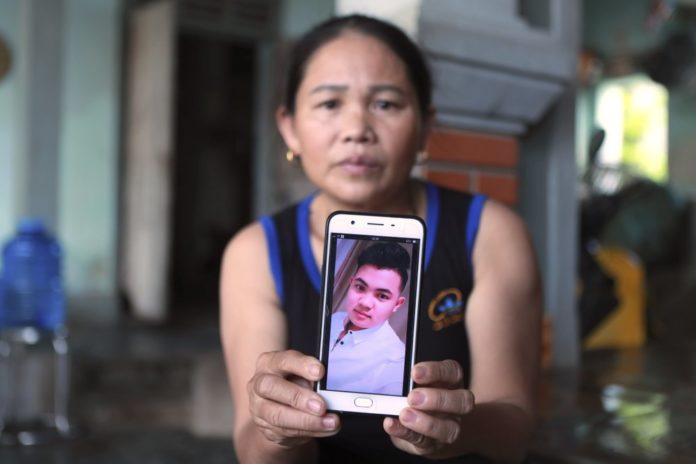 Vietnam’s government said Monday that it has received from British authorities the documents of four of the people found dead in the back of a truck in England last week to help determine whether any of them are Vietnamese.

The documents were handed over to Vietnam’s ministry of public security and will be used to help identify the victims, Deputy Foreign Minister Pham Thanh Son was cited by the VNExpress news website as saying.

It was not immediately clear what type of documents were sent.

British police initially believed the victims were Chinese, but later acknowledged that details around the bodies found last Wednesday in southeastern England were still evolving. Up to 24 Vietnamese families have since reported missing relatives whom they fear to be among the dead.

Vietnamese authorities have taken hair and other forensic samples from families who have reported missing people to assist the identification efforts.

British police said they have removed all the bodies from the truck and are awaiting autopsies. Identifying the victims is expected to be difficult and officials said very few documents were found with the bodies.

Smugglers normally take the passports of their passengers to obscure their identities, stripping them of their names and giving them new documents when they arrive at their destinations.

Families in central Vietnam continue to cling to hope that their missing loved ones are not among the victims.

In Diem Thinh village in Nghe An province, Hoang Thi Ai cried Monday as she received relatives and neighbors coming to her house to check on the latest news on her missing 18-year-old son, Hoang Van Tiep, who the family fears may be among the victims.

Tiep worked as a restaurant dishwasher in France for two years before deciding to go to England for a better-paying job at a nail salon, Ai said.

Chinese Foreign Ministry spokesman Geng Shuang said China has asked British authorities to provide more information on the identity of the victims in what British officials have called one of the country’s deadliest cases of human smuggling.

Geng also said Monday that reports that the victims had Chinese passports was “speculation.”

“It needs to be jointly dealt with and properly resolved by all parties concerned so that we can prevent a tragedy like this from repeating in the future,” Chen said at a news conference in Beijing.

British authorities charged the 25-year-old truck driver with 39 counts of manslaughter and conspiracy to traffic people. He was expected in court Monday. Three other people have been arrested in connection to the case.