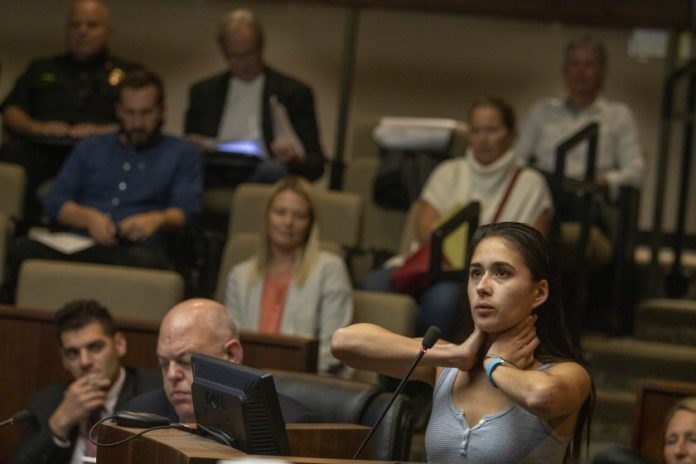 With multiple cities and states cracking down on vaping in recent weeks, spurred by a wave of mysterious illnesses and deaths, some public health advocates say they are energized by the sudden movement to reduce access to nicotine.

On a single day in Los Angeles County this week, at least four cities advanced laws that would greatly restrict the sales of tobacco. Massachusetts also recently instated a four-month ban on e-cigarettes, while Michigan and New York outlawed flavored e-cigarette products.

But, increasingly, other public health experts are warning of the unintended consequences of this political momentum.

They point to what they see as a misdirection by health officials: the vaping illnesses that are sending people to the hospital have been largely linked to marijuana, particularly THC cartridges purchased illegally. They also worry that the recent rash of legislative efforts could actually harm public health by making e-cigarettes less accessible than cigarettes, which experts agree are more dangerous.

For example, in San Francisco, the first city to ban e-cigarettes, residents soon will be unable to buy the devices, while cigarettes will remain on the shelves.

Leo Beletsky, a public health professor at Northeastern University, said e-cigarette bans could create an unregulated, underground market for vaping products, triggering a proliferation of the untested e-cigarettes and cartridges that appear closely linked to the severe lung illnesses that have sent hundreds of people to the hospital.

“Inadvertently, you’re actually pushing people toward the very same products that are causing the outbreak,” Beletsky said. “The bans seem really poorly configured to address the problem at hand.”

The vaping illnesses have so far taken 18 lives, the U.S. Centers for Disease Control and Prevention said on Thursday. But each year in the U.S., approximately 480,000 people die from illnesses caused by cigarettes, making up a fifth of all deaths in the country, said Erika Sward, assistant vice president for national advocacy for the American Lung Assn.

“They are not making the front pages and they should be. … What we’re seeing with lawmakers right now is political will, and we want to see that extend absolutely through e-cigarettes, but also across all tobacco products,” Sward said. “This a multi-front and a multi-product battle.”

This week, the Los Angeles County Board of Supervisors approved a ban on flavored tobacco products, including flavored vapes, menthol cigarettes and hookahs. The new law, which will apply to the 1 million people who live in unincorporated areas of the county, will take effect at the end of the month.

Speaking in a support of the ban, San Marino High School sophomore Alina Champon recently told the county supervisors that she spotted a boy in the corner of her classroom vaping with a Juul, a popular e-cigarette device.

“He was so addicted he couldn’t wait to get out of class,” Champon said.

One in four of the nation’s 12th-graders have used an e-cigarette in the last month, according to a 2019 national survey by scientists at the University of Michigan.

Gov. Gavin Newsom recently launched an awareness campaign about the dangers of vaping. The Trump administration has also proposed a ban on flavored e-cigarettes, and several states, including Ohio and Washington, are on their way to adopting similar laws.

Although the science on e-cigarettes is still mixed, some researchers believe banning them will harm smokers trying to quit. For instance, another 2019 study published in the New England Journal of Medicine found that e-cigarettes were nearly twice as effective in helping people quit smoking as nicotine patches or gum.

“It’s distressing to me — not that we’re focusing on kids, but that we’re ignoring the consequences for adult smokers,” said Ken Warner, professor emeritus at the University of Michigan School of Public Health.

New York University tobacco expert Dr. Raymond Niaura said removing e-cigarettes from the market could be “a public health disaster.” He co-wrote a 2017 study that projected that if most American smokers switched to e-cigarettes, between 1 million and 6 million lives would be saved.

“We should be excited about how we use these products to get people off cigarettes, but instead the opposite is happening,” Niaura said. “We’re going to throw that opportunity away.”

Niaura said e-cigarettes are promising because smokers seem to actually like using them. Former smokers who spoke at the L.A. County supervisors meeting said flavors such as pina colada and cinnamon roll helped them quit.

Pat Meyer, 60, quit cigarettes nine years ago by switching to a blueberry-flavored vape. She had been smoking a pack and a half a day for more than a decade.

San Diego County, where Meyer lives, is considering a ban on flavored tobacco. If the products become illegal, she said she plans to make her own or get them from friends.

“I’m ready to become a felon, a responsible felon,” Meyer said. “It is not an alternative for me to go back to smoking.”

Instead of taking away e-cigarette products from adults who use them, officials can address e-cigarettes’ popularity among kids by enacting more age restrictions, taxes and other regulatory mechanisms, Beletsky said. California is one of 18 states that have already raised the minimum age to buy e-cigarettes and other tobacco products to 21.

Beletsky also suggested that given the close connection between the lung illnesses and THC, more attention should remain on federal oversight of marijuana.

“The conversation should be: Why do we have a cannabis industry that is not well-regulated?” Beletsky said. “You’re sort of encouraging people to then rely on less regulated, illicit products, which are more likely to be harmful.”

But speaking out against some of the more drastic policies emerging from cities and states over vaping has become somewhat of a stigma in the public health community, where many people see this as a moment of opportunity to help kids, Beletsky said.

“People who you usually align with see differently on this particular issue,” he said.

The public outcry around vaping illnesses has been powerful, and some politicians are running with it. The Food and Drug Administration does not have the ability to ban cigarettes; only cities and states can.

This week, Manhattan Beach took a step toward becoming the second city in the nation to ban all tobacco sales. Beverly Hills became the first to do so earlier this year.

“Let’s be brave, Manhattan Beach,” said Councilwoman Hildy Stern at a council meeting Tuesday night. “We have an opportunity to step in.”

Chris Bostic, the deputy director for policy for the Washington, D.C.-based nonprofit Action on Smoking and Health, said that it has been difficult to garner political support for laws on cigarettes because they are largely smoked by minorities and people who are poor.

“White suburban families don’t worry about cigarettes anymore,” Bostic said, noting that cigarettes remain a major public health problem. “It’s sort of out of sight and out of mind, whereas e-cigarettes hit those communities.”

The tobacco lobby is well-funded nationally, and local governments across the country get tax revenue from cigarette sales. Although a reduction in smokers will lead to fewer public health problems and greater economic savings down the road, the loss of revenue will be felt first.

Still, the Manhattan Beach City Council agreed Tuesday to draft a law that would immediately ban all vaping products and flavored tobacco, including menthol cigarettes. And, starting in 2022, it would outlaw the sale of all tobacco products. The council will take a first vote on the ordinance next month.

“One thing about policy is that it doesn’t necessarily always follow directly and logically from rational science. … It’s also a function of public sentiment and where people are,” said UCSF tobacco expert Ruth Malone about the recent wave of tobacco legislation nationwide. “I think people are really starting to feel that this is something that they don’t want in their communities anymore.”