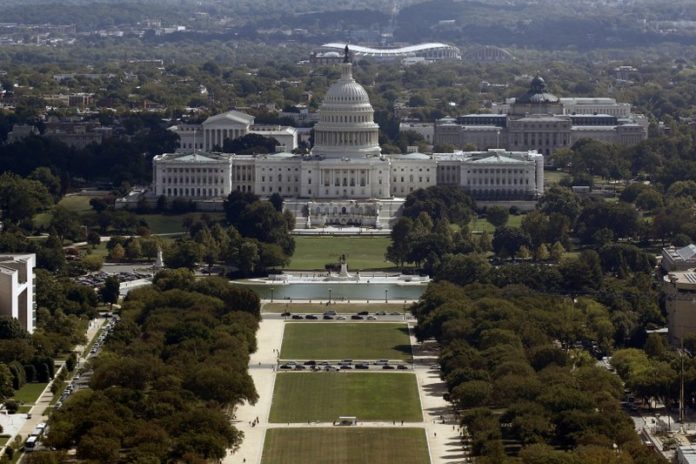 The Trump administration reported a river of red ink Friday. The federal deficit for the 2019 budget year surged 26% from 2018 to $984.4 billion — its highest point in seven years. The gap is widely expected to top $1 trillion in the current budget year and likely remain there for the next decade.

The year-over-year widening in the deficit reflected such factors as revenue lost from the 2017 Trump tax cut and a budget deal that added billions in spending for military and domestic programs.

Those projections stand in contrast to President Donald Trump’s campaign promises that even with revenue lost initially from his tax cuts, he could eliminate the budget deficit with cuts in spending and increased growth generated by the tax cuts.

Here are some questions and answers about the current state of the government’s finances.

The deficit has been rising every year for the past four years. It’s a stretch of widening deficits not seen since the early 1980s, when the deficit exploded with President Ronald Reagan’s big tax cut.

For 2019, revenues grew 4%. But spending jumped at twice that rate, reflecting a deal that Trump reached with Congress in early 2018 to boost spending.

WHY DOESN’T WASHINGTON DO SOMETHING ABOUT IT?

Fiscal hawks have long warned of the economic dangers of running big government deficits. Yet the apocalypse they fear never seems to happen, and the government just keeps on spending.

There have been numerous attempts by presidents after Reagan to control spending. President George H.W. Bush actually agreed to a tax increase to control deficits when he was in office, breaking his “Read my lips” pledge not to raise taxes.

And a standoff between President Bill Clinton and House Speaker Newt Gingrich did produce a rare string of four years of budget surpluses from 1998 through 2001. In fact, the budget picture was so bright when George W. Bush took office in 2001 that the Congressional Budget Office projected that the government would run surpluses of $5.6 trillion over the next decade.

That didn’t happen. The economy slid into a mild recession, Bush pushed through a big tax cut and the war on terrorism sent military spending surging. Then the 2008 financial crisis erupted and triggered a devastating recession. The downturn produced the economy’s first round of trillion-dollar deficits under President Barack Obama and is expected to do so again under Trump.

As far as most of us can tell, the huge deficits don’t seem to threaten the economy or elevate the interest rates we pay on credit cards, mortgages and car loans. And in fact, the huge deficits are coinciding with a period of ultra-low rates rather than the surging borrowing costs that economists had warned would likely occur if government deficits got this high.

There is even a new school of economic theory known as the “modern monetary theory.” It argues that such major economies as the United States and Japan don’t need to worry about running deficits because their central banks can print as much money as they need.

Yet this remains a distinctly minority view among economists. Most still believe that while the huge deficits are not an immediate threat, at some point they will become a big problem. They will crowd out borrowing by consumers and businesses and elevate interest rates to levels that ignite a recession.

HAVEN’T ECONOMISTS BEEN MAKING THESE WARNING FOR DECADES?

Federal Reserve Chairman Jerome Powell says the day of reckoning is still coming but isn’t here yet. Most analysts think any real solution will involve a combination of higher taxes and cost savings in the government’s huge benefit programs of Social Security and Medicare.

ANY SIGN THAT WASHINGTON MAY TAKE THE POLITICALLY PAINFUL STEPS TO CUT THE DEFICIT?

In short, no. There has been a major change since the first round of trillion-dollar deficits prompted the Tea Party revolt. This shift brought Republicans back into power in the House and incited a round of fighting between GOP congressional leaders and the Obama administration. A result was government shutdowns and near-defaults on the national debt.

But once Trump took office, things changed: The president focused on his biggest legislative achievement, the $1.5 trillion tax cut passed in 2017. This appeared to satisfy Republican lawmakers and quelled concerns about rising deficits.

Democratic presidential candidates have for the most part pledged to roll back Trump’s tax cuts for corporations and wealthy individuals. But they would use the money not to lower the deficits but for increased spending on expensive programs such as Medicare for All.

SO THE DEFICITS WON’T ANIMATE THE PRESIDENTIAL CAMPAIGN?

It doesn’t seem likely, though former Rep. Mark Sanford, who has mounted a long-shot Republican campaign against Trump, is urging Republican voters to return to their historic concerns about the high deficits.

And economists note that today’s huge deficits are occurring when the economy is in a record-long economic expansion. This is unlike the previous stretch of trillion-dollar deficits, which coincided with the worst recession since the 1930s.

But analysts warn that if the economy does go into a recession, the huge deficits projected now will expand significantly — possibly to a size that would send interest rates surging. Such a development, if it sparked worries about the stability of the U.S. financial system, might produce the type of deficit crisis they have been warning about for so long.