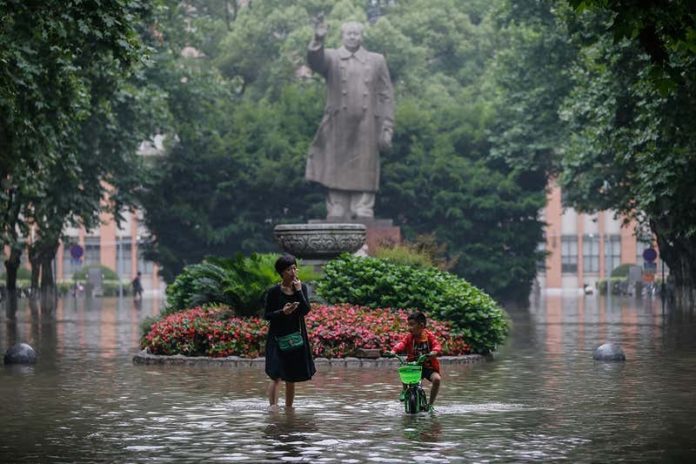 Up to 630 million people are living on land threatened by flooding from sea level rises by the end of the century – three times as many as previously thought, according to a new analysis.

The greatest increase in risk was found for communities living in Asian megacities, due to the way earlier estimates were worked out.

“To us it’s a staggering difference. It’s a completely new perspective on the scale of this threat,” says Benjamin Strauss at Climate Central, a New Jersey-based independent organisation.

Previous calculations of the number of people at risk have been based on estimates of land elevation around the world using satellite data from NASA. But that approach gets confused by rooftops and forests, which can be mistaken for the ground, meaning a skyscraper-packed city such as Shanghai could look at a misleadingly low risk of flooding as seas rise.

Strauss and his colleague Scott Kulp used artificial intelligence to train a model on several sets of data, including much more accurate maps of elevation in the US, captured by planes using laser light. The model predicted where the old data was making mistakes and tried to flatten the errors caused by buildings and trees, to reassess the vulnerability of cities.

The results suggest there are far more people living on land below annual flood levels now, at 250 million people versus estimates on the old data of up to 65 million. As global warming causes sea levels to rise, that quarter of a billion jumps to as many as 630 million by 2100, assuming a future in which greenhouse gas emission rises are high.

The biggest relative increases by the end of the century are in Asia, with 87 million people in China on at-risk land, versus 26 million in previous estimates. In Bangladesh, the number is 50 million, up from 5 million. The old approach may have been heavily underestimating risk in the region because of the dense, tall cities found across Asia’s coastlines.

Kulp says there are two big caveats: they did not consider sea defences and future populations. Nevertheless, Strauss says the findings should act as an early warning call for governments and city leaders. “I think that coastal cities that want to thrive into the [future] need to take a very close look at their vulnerability, and begin to plan very quickly what they are going to do about rising sea levels.”

Dean Gesch at the US Geological Survey, who was not involved in the study, says the new model is: “Surely an advancement in global elevation data, but it still does contain vertical error, and in some of the analysis and results in the paper that vertical error was not considered.” That means the headline figure of 630 million people at risk should be treated with caution, he says.

Strauss says he hopes the research acts as a spur to cut emissions faster and deeper. The results suggest that the potential impact of our current emissions path is far greater than we thought it was. But in that case “it’s also the case that the benefits from reducing climate pollution are far greater”, he says.