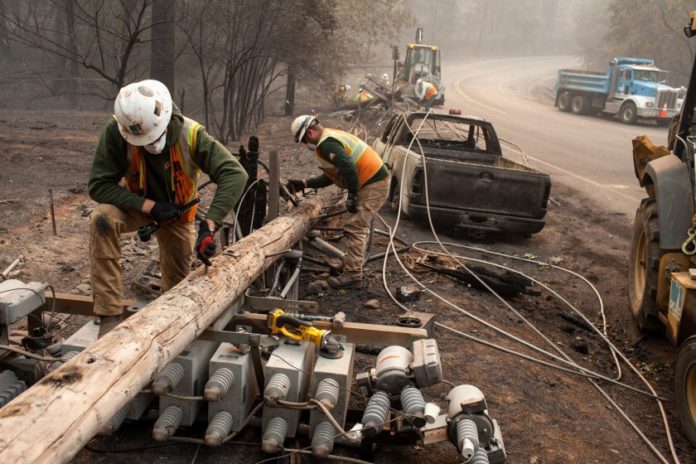 SACRAMENTO — In an unprecedented move, Pacific Gas & Electric early Wednesday began a sweeping shut off power to about 800,000 customers across Northern California in a desperate attempt to avoid wildfires caused by winds damaging power equipment.

The power cutoffs started in several counties around Sacramento, including Placer and Yuba, amid increasing winds. Officials said cutoffs will continue throughout the day, including in parts of the Bay Area.

The blackouts will impact 34 counties in Central and Northern California. It would be the biggest power shutdown so far as utilities across the state attempt to reduce wildfire risk due to heavy wind. Utilities malfunctions have been tied to some of the state’s most destructive fires, including last year’s Camp fire, which devastated Paradise, Calif., and the 2017 wine country blazes.

“It is a very blunt way of approaching the situation, but at the same time, there’s an understanding of why it’s being undertaken,” said Sonoma County Supervisor David Rabbitt, who noted PG&E’s announcement came on the second anniversary of the 2017 firestorm. “We have vulnerable populations, our elderly and young children. We’re mostly concerned about them.”

The shut-down will be PG&E’s third in the last two months, the utility said. Power was restored within a day during the previous two events, but those were also for much smaller slices of its customer base.

“It is very possible that customers may be affected by a power shut-off even though they are not experiencing extreme weather conditions in their specific location,” the utility said in a statement. “This is because the electric system relies on power lines working together to provide electricity across cities, counties and regions.”

Southern California Edison announced it, too, was considering preventive power outages. The utility said that given the anticipated possibly strong Santa Ana winds, power could be cut off to more than 106,000 customers in parts of eight Southern California counties.

The power shut-offs have generated debate, with some residents saying they create a whole new set of dangers as they try to watch for news about fires. There has been heightened concern about those with health issues who rely on medical equipment.

Throughout Tuesday, the staff at the Ukiah Senior Center were scrambling to prepare for the planned outage, buying butane canisters at sporting goods stores so they could make coffee and freezing water bottles in case the power was out for days.

Relief came in the form of an email, when city leaders alerted the community just after 3:30 p.m. that PG&E had indicated that Ukiah’s electric system won’t be affected by the planned outages. Local leaders did warn that, because extreme weather is expected, outages could still occur.

“People have been on pins and needles all day because of the uncertainty,” said Diana Clarke, the senior center’s executive director. “They don’t know if they should go out and buy supplies, and especially with seniors, they don’t have a lot of extra money.”

The senior center provides residents with hot meals Monday through Friday and delivers meals to older residents who aren’t able to leave their homes. On Tuesday, the center’s outreach supervisor was busy calling people to tell them they weren’t sure whether they would have electricity and thus be able to prepare meals for delivery, Clarke said.

There is a deep sense of frustration, and skepticism, in the community at the idea of losing power to protect them from wildfires, she said.

“PG&E should have been doing the proper maintenance for the last decade,” Clarke said. “This wouldn’t have been necessary [if they had], and I think that’s what has got everyone so angry and frustrated with PG&E right now. This is a crisis of PG&E’s making.”

But it may also be the best option available as the utilities and the state face trade-offs between ensuring reliable power and the public’s safety, said Michael Wara, director of Stanford University’s climate and energy policy program.

“Power shut-offs in the face of really widespread dangerous fire weather, which is what we’re confronting, may be the best thing we can do for the time being,” Wara said. “In the long run, PG&E needs to fix its grid. And so does Edison … so they can use power shut-offs as a more limited tool like a scalpel rather than the blunt instrument they have now.”

Some state and local officials also have complained that utilities don’t always give enough notice before turning off the power. And they have expressed concerns about communications and evacuations if the power is out, especially if traffic signals don’t work and cellphone service is affected.

Caltrans announced it was closing multiple tunnels around the Bay Area as early as Tuesday evening because they require power to control traffic flow. Among them are the Caldecott Tunnel in Contra Costa County and the Tom Lantos Tunnels in Pacifica.

Gov. Gavin Newsom, at a bill signing ceremony in Oakland on Tuesday, defended PG&E’s plans for the intentional power shutdowns.

“The reality is that we want to protect people. We want to make sure people are safe. This is what PG&E thinks is in the best interest of their customers and ultimately for this region and the state,” the governor said.

“It is a massive inconvenience,” he added. “No one wants to see this happen. But it is a public safety issue.”

Wara compared it to the 1989 Loma Prieta earthquake and the rolling blackouts Californians experienced during the energy crisis of the early 2000s. He said while those events may have triggered blackouts that involved more customers, they weren’t on the order of days like what PG&E is saying could happen here.

Sen. Jerry Hill (D-San Mateo), whose district may be affected by the blackouts, acknowledged there is a fire danger requiring some shutting down of power, but he called the extent of the possible outage troubling.

“I think it is excessive,” said Hill, a longtime critic of the utility. ”PG&E clearly hasn’t made its system safe. These shut-downs are supposed to be surgical. But shutting down power to 800,000 people in 31 counties is by no means surgical.”

Hill, who convened a recent hearing on the Public Utility Commission’s oversight of PG&E, called on the state agency to do a “root cause” analysis of the power shut-downs.

“This cannot be something that can be acceptable nor long-term,” Hill said. “This is third world, and we are not.”

It also makes economic sense for the utility to make its grid more resilient, Wara said, because it’s losing money when it has turned off the power.

Once the fire weather subsides, PG&E employees will check the grid in person and electronically before determining if it is safe to turn back on, a company official said.

It took the utility less than a day to restore power to customers during a three-county shut-off it performed last weekend and during another in September, the company said in a statement.

At a press conference Tuesday, Oakland Mayor Libby Schaaf expressed her concern over PG&E’s timeline to restore power, but added she was grateful they had some time to prepare.

“We expect PG&E to do everything to minimize the impact to residents,” Schaaf said. “The idea of five days without electricity is devastating. We fully expect that to be a worst-case scenario.”