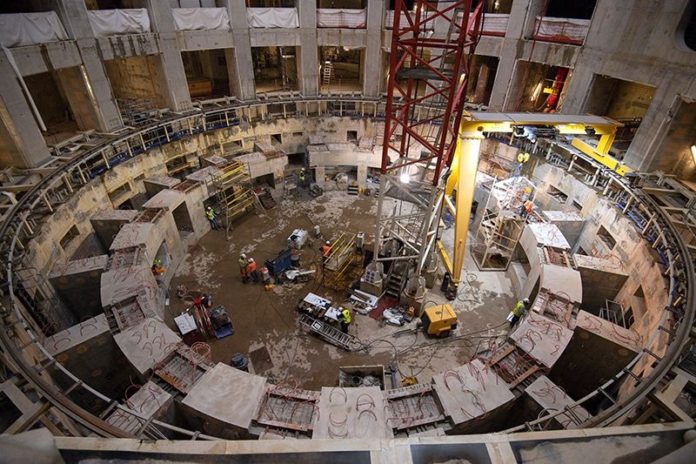 The United Kingdom has entered the race to build the world’s first prototype commercial fusion reactor. The British government announced a £200-million (US$248-million) investment on 3 October.

Even though no fusion facility has yet been able to generate more energy than it takes to run, governments around the world are already looking at how they might build a commercial reactor. Both the design and timeline for the UK proposal make it among the most ambitious.

“Whether it’s sufficient, I don’t know, but it’s a real amount of money,” says Tim Luce, chief scientist at the world’s largest fusion experiment ITER, which is supported by an international collaboration. If the cash goes on prototyping the key elements of the eventual device, that should give Britain “a very good start”, he says.

Over the next four years, scientists at the Culham Centre for Fusion Energy near Oxford will produce a detailed design for the Spherical Tokamak for Energy Production (STEP), a plant capable of generating hundreds of megawatts of net electrical energy that would be up and running by the early 2040s. If the decision is made to go ahead and build the facility, the bill would stretch to billions of pounds.

“It’s ambitious and adventurous, but I think the fusion programme has to be,” says Howard Wilson, director of the STEP programme at the UK Atomic Energy Authority (UKAEA), which runs the Culham Centre.

The nuclear fusion of hydrogen atoms into helium — the process that powers the Sun — promises an almost limitless supply of clean energy. But no facility has yet been able to achieve the level of heat and confinement needed for a reaction to generate more energy than it takes to produce. The international ITER experiment being built in southern France aims to do that in 2035. The STEP project’s goal is to go a stage further: creating a plant that can harness electricity from fusion. Only if ITER succeeds will scientists know whether a prototype commercial plant such as STEP is really viable.

Like ITER, the planned UK facility would be based on a ‘tokamak’ design that uses magnetic fields to confine a plasma of heavy isotopes of hydrogen, tritium and deuterium, which fuse under extreme heat and pressure. But whereas ITER’s tokamak is doughnut-shaped, STEP would use a method trialled in the United Kingdom since the 1990s that holds the superheated gas in a more compact, cored-apple shape.

Scientists hope that the smaller facility — which will measure about 10-metres across — will prove cheaper. But its reduced size could also bring problems, such as how to manage the plasma’s extreme heat over a smaller surface area.

Building a more compact tokamak is a risky option, says Anne White, a plasma physicist at the Massachusetts Institute of Technology in Cambridge. Physicists are confident that ITER’s tokamak will work as planned because its design has been studied extensively. But for spherical tokamaks there are many unknowns, she says. “That means there is more risk, but on the flip side, it could also mean there is more to discover and perhaps more to optimize.”

Britain is just one of a number of countries planning to build a commercial reactor. A Chinese facility known as the Chinese Fusion Engineering Testing Reactor could come online as early as 2035, and DEMO, a European successor to ITER, is planned for the 2050s. A number of companies around the worldare also hoping to achieve even more compact designs.

The cash for STEP comes on the back of £20 million announced by then prime minister Theresa May’s government in October last year, which funded the first year of design. Subsequent phases of the facility’s development, after 2024, would involve both public and private investment, says Ian Chapman, the Culham Centre’s chief executive and head of the UKAEA.

Britain’s future role in ITER remains uncertain because its membership comes through the European Atomic Energy Community (Euratom), which the UK government plans to leave when the country exits the European Union. For more than 30 years, Culham has hosted the EU-funded Joint European Torus (JET), which is testing fuel technologies for ITER. Although the government has said that it hopes to find a way to remain part of ITER, STEP investment helps to future-proof the United Kingdom’s long-standing expertise in fusion, says Luce. “To get a return on investment from ITER, countries need domestic expertise and a path forward,” he adds.

Chapman insists, however, that the STEP project is not about Britain trying to go it alone. Each of the seven partners in ITER — China, the European Union, India, Japan, South Korea, Russia and the United States — is working on designing commercial reactors, building supply chains and developing domestic expertise to exploit the next stage of fusion development, he says. “We shouldn’t see STEP as a sign of turning our back on international collaboration.”

Ways to Find Water in a Desert