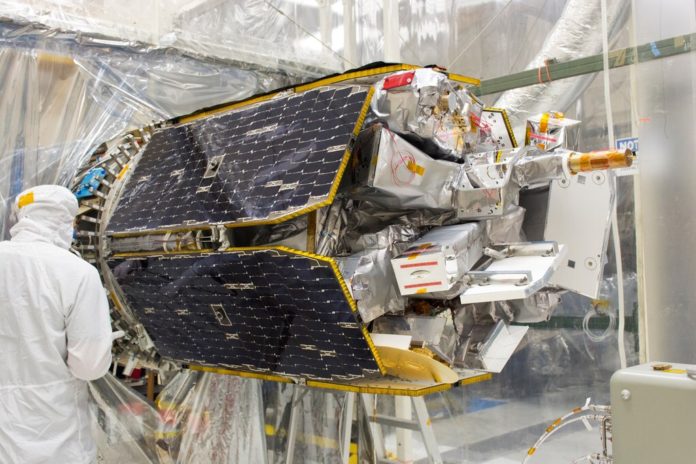 Last Monday, just as the workday was winding down, Paula Milano received a phone call that threw her week into chaos. Milano, who helps run the Space Sciences Laboratory at UC Berkeley, had been gearing up for a satellite launch. But on the phone now was a friend of hers, with bad news: PG&E, the power company, was warning the school that its electricity could be cut Wednesday—making the campus one of more than 700,000 customers that would suffer the same fate.

The outage was a precautionary measure to keep forecasted high winds from jostling electrical equipment and starting the next massive wildfire. And it fell to this friend, who manages several buildings on campus, to piece together a plan for the coming plunge into darkness. Surely Milano’s lab could go without power for a while, right? “And I was like bleeeh—no man, no way,” she says. “We’re launching a satellite on Wednesday.”

That’d be the ICON spacecraft, meant to study Earth’s ionosphere, the place that, as NASA describes it, is “where terrestrial weather from below meets space weather above.” ICON would launch out of Cape Canaveral in Florida, where a NASA team would oversee the spacecraft’s journey from ground to orbit on an air-launched rocket. But this Berkeley lab, which designed and built the satellite, needed to oversee the deployment of the instrument itself. It would be running mission control for the satellite from afar—assuming they had electricity. “If a scrub of the mission happens because of Berkeley, that’s a huge black eye for us, and it’s a huge public black eye for NASA,” Milano says.

So as PG&E customers across Northern California scrambled last Tuesday to buy flashlights and water and fill their cars with gas, Milano mobilized a campaign to electrify the Space Sciences Laboratory.

Normally, NASA wouldn’t let mission control run on anything less than a stable grid connection, says Steven Beckwith, the lab’s director. “They basically will not let you launch if you’re on backup power. But it turns out that the contract that we had written with NASA gave us that call.”

The good news was that the university runs its own cogeneration plant, or cogen, which could provide some of the campus’ buildings with power in the event of an outage. But Milano and Beckwith had no way of knowing for sure if it would offer a steady source of electricity.

On Tuesday, PG&E updated its messaging: The campus and much of the rest of Northern California would lose its power soon, though the question remained of when. “They chose lives over science, which I get,” says Milano. “So then we went into breakneck speed on Plan B.”

The team already had a backup generator outside the building but decided to bring in another. Then scientists had to figure out how much fuel they’d need, given how long they expected to be divorced from the grid. Also they had to find a guy to bring over a truckload of fuel. Beckwith dispatched people to find hundreds of feet of high-gauge extension cords, which they snaked through the hallways of the lab.

The 30-odd people working mission control would themselves need fuel too. SSL prepares for any launch by bringing in catering and snacks from Costco runs, but water could be a problem if they lost power, given the facility is up on a hill and depends on electric water pumps. So in preparation, they filled two 400-gallon tanks on site with water before the supply got cut off. Then to get rid of all that food and water, they secured two portable toilets for the parking lot. To lighten the load on electrical and nutritional resources, Beckwith ordered staff who didn’t need to be on site to work from home for the launch.

“We said, we know we can do this, that this is a finite challenge,” adds Beckwith. “I think by Tuesday evening, we actually felt like we were going to be OK.”

Wednesday came, and PG&E still couldn’t say when the campus might lose power. But a reprieve, of sorts, came from Cape Canaveral: At 11 am Pacific time, Beckwith got word that the launch was scrubbed until the next day due to weather. Perhaps, then, their mission could dodge the outage entirely.

At around 11 pm on Wednesday, Milano was at home, right over the hill from campus, when her power went out. She alerted a colleague, who rushed over to the lab in time to witness … not much at all. “A little blip,” Milano says, “but we maintained power. So that meant the cogen worked.”

When Beckwith arrived at the lab Thursday morning, the cogen power was still on. Their new launch time was set for that evening at 8:31 pm Eastern time. As the Berkeley people stared into screens in two small rooms lined with yellow extension cords, monitoring the temperature of the spacecraft and other vitals, a converted airliner raced down a Cape Canaveral runway carrying a Pegasus rocket, which housed the satellite, and ascended to 39,000 feet.

But then, another hiccup: Two minutes before the jet dropped the rocket, a glitch cut off microphone contact between the pilots and Cape Canaveral. So they looped the aircraft back around and started the countdown anew. A half-hour after the initial delay came the command: “Drop on my mark—3, 2, 1—drop. Pegasus away.” The rocket fell a few hundred feet from the jet, then fired itself up to deposit ICON into orbit. When the refrigerator-sized satellite reached its destination 360 miles up, the members of the Space Sciences Lab—fully powered and hydrated and well-fed—began their mission, tracking the satellite as it passed over California.

The Golden State at large, and UC Berkeley in particular, learned brutal lessons last week. For one, climate change, which has made wildfires in the west more ferocious, is already taking lives. And in its management (or mismanagement), California’s economy is taking a bludgeoning as electricity becomes less certain.

For academics too, the consequences can be maddening: One Berkeley scientist had to load his freezers onto a moving truck and send them across the San Francisco Bay to the University of California, San Francisco, which hadn’t lost power.

“Modern society is very much like a biological organism, like us,” says Beckwith. “If you shut down the metabolism, it dies.” ICON, thank the heavens, was a lucky survivor.