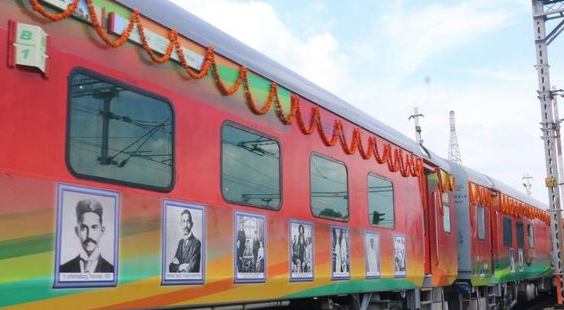 Muzaffarpur/Motihari, Oct 2 (PTI) The East Central Railway on Wednesday paid tribute to Mahatma Gandhi on his 150th birth anniversary by converting an express train to a veritable exhibition on the transformation of “Mohan to Mahatma”.

The Muzaffarpur-Anand Vihar Sapt Kranti Express chugged off from Muzaffarpur with upgraded coaches which were painted and affixed with photographs and information on various events of Gandhiji’s life.

“The train has been upgraded to LHB rake and vinyl wrapped with the theme Mohan to Mahatma. It was flagged off at Muzaffarpur by Ram Sajeevan Thakur, a 97-year-old freedom fighter,” the ECR headquarters at Hajipur said.

LHB or Linke Hofmann Busch coaches are modern and beneficial to passengers in a number of ways.

A function was organized after the train reached Bapu Dham Motihari station in East Champaran district.

“I am thankful to the Railways for coming up with such a novel idea for paying tributes to Mahatma Gandhi whose links with Champaran and Motihari are recorded in history,” Union minister and local MP Radha Mohan Singh said at the programme.

Singh, also chairman of the Parliamentary Standing Committee on Railways, said the Bihar government also deserves commendation for taking up the face-lift of various spots in the state which have been associated with Gandhi.

“Let us on this day pledge for a clean India. Gandhi had famously said if he were to choose between cleanliness and independence, he would choose the first option,” Singh said at the programme in which the state’s Art and Culture Minister Pramod Kumar was also present.