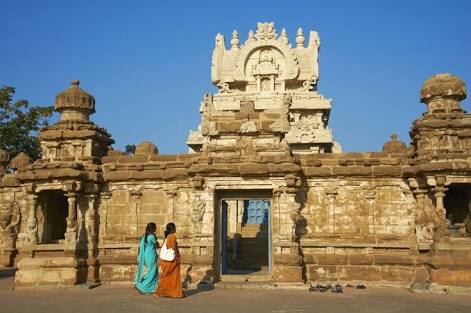 Many people think the skyscraper is a modern invention. Think again. In South India, people were building towering, multi-storey gopurams (temple towers) centuries before most of the world peeked above the ground floor. The distinctive architecture of South India is a world away from the narrow, angular temple style of the north. Here, temples cover whole city quadrants, enclosed by statue-covered gateway towers that climb as high as office blocks.

Ask an outsider about India’s most famous monuments, and few would name anything south of the Taj Mahal– a serious oversight when you consider the lavish architecture of South India! To redress the balance, here is our pick of South India’s most spectacular temples.

The grand-daddy of all Dravidian temples, the Meenakshi Amman temple boasts no less than 12 gopurams, with the tallest reaching a giddy 170 feet (52m). The temple compound covers the equivalent of 25 football pitches, but it can be hard to find standing room amongst the 25,000 devotees who visit daily. Only Hindus can enter the atmospheric inner sanctum, but everyone is free to gaze on the rainbow-coloured gopurams, which are covered in an almost hallucinogenic collection of sculptures depicting Hindu deities and supernatural beings (there are 1511 statues on the south gopuram alone). Look carefully and you’ll see most of the key legends from the Vedas and the Ramayana rendered in super-saturated colour. The temple goes into overdrive in April for the Chithirai Festival, when one million pilgrims arrive to celebrate the marriage of Shiva and the triple-breasted goddess Meenakshi.

The grand temple of Shiva at Mamallapuram was the crowning glory of the Pallava Empire, which dominated southeast India for seven centuries. The entire city of Mamallapuram is a museum of Pallava sculpture – indeed, carving idols for temples is still a major local industry – but the Shore Temple was one of the first temples in India to be built by masons, rather than simply being carved into the existing bedrock. The location, on a jutting promontory, has exposed the temple to 1300 years of sea spray and erosion and many carvings are now just Impressionist suggestions of what they once were, but this just adds to the sense of mystery.

The third great religion to rise in the subcontinent, Jainism, a part of Sanatan Dharma, advocates a life of ahimsa (non-violence), ascetism, self-control and strict vegetarianism, and followers of the faith flock to the village of Sravanabelagola near Mysore to pay their respects at the world’s largest monolithic statue, depicting Gomateshvara, son of the first Jain tirthankar (guru). Reached via a precarious scramble over 615 rock-cut steps, the naked deity measures 17.5m from curls to toenails, and the climb to the temple pavilion affords spectacular views over a landscape of rocky outcrops, temple tanks and palm trees. Once every 12 years, the statue is bathed in a cascade of milk, butter, curds, sandalwood paste, tikka powder, coins and precious stones as part of the fabulously colourful Mastakabhisheka festival.

Tiruvannamalai’s Arunachaleshwar Temple is spectacular at ground level; it’s even more impressive from above. Take the winding path that climbs up the eastern slope of Mount Arunachala and you’ll see the temple spread out below you like a three-dimensional architect’s plan. From here, the temple’s towering, gopurams are lined up like Mayan pyramids around a circuitboard of interlocking temple courtyards. One suspects that this was the view that the temple-builders always intended, for the benefit of gods looking down from the heavens.

Vijayanagar, on the site of modern-day Hampi, was once a city of half a million people, but it vanished into history after an onslaught by the sultans of Delhi, leaving behind India’s most evocative collection of ancient ruins. There are nearly 3700 temples, shrines and palaces scattered across the valley floor, but the Vittala Temple marks the artistic high point of Vijayanagar civilisation. Supported by musical columns which resonate at different frequencies, the temple is covered in elegant carvings of deities and supernatural beings – look out for the yali, a hybrid of lion and elephant – and a stone chariot stands waiting in the courtyard to transport Vishnu to the heavens.

Entry to the temple of Sri Venkateswara in Andhra Pradesh has to be earned. Pilgrims climb 3500 steps to reach this revered hilltop temple, following a 15km walking trail from the town of Tirupathi at the bottom of the valley (shuttle buses are on hand for those less able or willing to complete the trek). A staggering 40 million pilgrims brave the tropical heat each year to make this auspicious ascent, and pilgrims queue for hours in a maze of metal cages at the summit for a fleeting glimpse of the venerated idol of Sri Venkateswara, contained in a gold-roofed shrine at the heart of the compound. As the most visited temple in the world, it’s the perfect place to connect with India’s spiritual side.

Gateways to the South

Mumbai (Bombay) is the traditional starting point for a trip around South India, but growing numbers of international airlines now fly direct to Bengaluru and Chennai. Bengaluru is the ideal access point for the delicate stone carvings of Karnataka and the hilltop shrines of Andhra Pradesh, while Chennai is the closest gateway to the towering gopurams of Tamil Nadu. If you fly into Chennai, allow a few days to sample India’s finest vegetarian food before you head south to Mamallapuram or Tiruvannamalai.