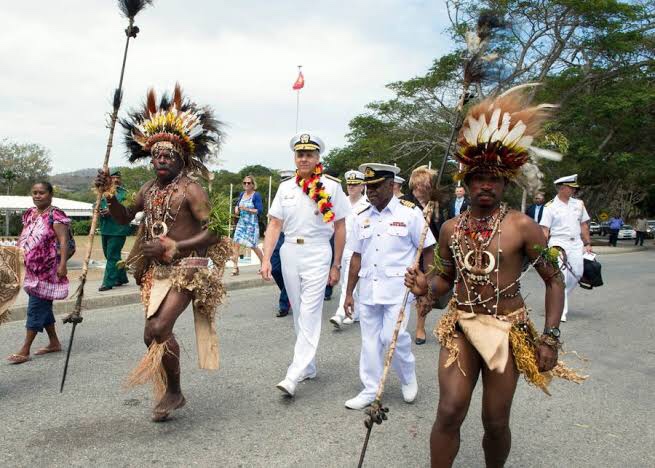 A remote and still relatively undiscovered destination, Papua New Guinea is one of the few places left in the world where you can truly go off the beaten track. Whether you’re trekking in remote mountain ranges, searching for the elusive bird of paradise in cloud forests or travelling to off-the-grid villages to get to know some 750 tribes who call PNG their home, you are likely to have the country’s wanders mostly to yourself.

Journeying along the Sepik

Imagine making your way along Papua New Guinea’s mightiest river by motorised longboat. As you round the river’s bends, every so often, traditional villages come into view – places with stilt-houses, where mysterious rituals are conducted in haus tambarans (spirit houses), where drummers beat complex rhythms on garamut drums, carved out of entire logs and adorned with animal head carvings, and where you can encounter men with scarring made to resemble crocodile skin – the sign of passing a coming-of-age ritual. The villages of the Middle Sepik are among the most interesting; here you can stay in thatched guesthouses, share simple meals of tubers and tinpis (tinned fish) with the locals and admire some of the most remarkable art and carvings in the country, produced by master craftsmen. Trips along the Sepik are typically arranged in the town of Wewak, or you can prearrange your journey on a liveaboard boat.

Tracing history on the Kokoda Track

The rugged Kokoda Track stretches for 96km across the Owen Stanley Range in eastern Papua New Guinea. During WWII, between July 1942 and January 1943, bitter fighting took place along the track between the invading Japanese forces and Australian defenders, eventually resulting in a massive defeat for the Japanese. The Kokoda Track has since become a place of pilgrimage for many Australians, who see it as their opportunity to pay their respects to those who fought and died here. Whether you are a military history buff who’ll appreciate the war memorials and relics en route, or simply an outdoor enthusiast in search of a tough trekking challenge, the Kokoda Track fits the bill. The trek takes from six to 11 days, depending on your pace and physical fitness. The steep, challenging terrain should not be underestimated: most trekkers spend months training for the hike. Trekking is normally done in a group, with several locally-based operators offering experiences guides and porters.

Celebrating traditional culture in the Highlands

The Highlands hold some of the most resilient cultures in Papua New Guinea, maintaining a treasure trove of extraordinary experiences from sharing a traditional mumu feast to immersing your senses into the colour and culture of the Huli Wigmen. There is perhaps no better time or place to see impressively adorned and painted tribesmen than the country’s two biggest cultural fests: the Goroka Show, which takes place in Goroka over a weekend in mid-September; and Mt Hagen, which takes place in Mt Hagen over the third weekend in August. Massive feather headdresses, fearsome war paint, grass skirts and traditional weapons all feature in the celebrations, and as many as 100 tribal groups from across the Highlands attend, with many taking part in singsing (traditional songs and dances).

Venturing beneath the waves

Papua New Guinea is a world-class diving destination, with exceptional marine diversity, varied underwater topography of colourful reefs and splendid walls, a vast range of WWII wrecks to explore, and good visibility year-round. Rabaul in New Britain is particularly renowned for its wealth of wrecks; Kimbe Bay in West New Britain boasts a bewildering array of reef fish, while dive sites near Kavieng in New Ireland attract large pelagic life, such as rays, barracuda, grey sharks and turtles. Off the mainland, Milne Bay has some of PNG’s best wall dives and muck diving, while Madang is an all-rounder, with a proliferation of reef and wreck dives. You can base yourself in diving lodges or else spend a few days aboard a local live-aboard, such as the Chertan in Milne Bay or the FeBrina in Walindi, New Britain.

Immersing yourself in village life on the Trobriand Islands

Anthropologists have long been fascinated with the Trobriand Islands. They receive few visitors, so you are likely to be a subject of great curiosity and to receive a warm welcome in every village you set foot in. Visitors tend to come to Kiriwina, the main island, where they can choose between a couple of lodges, as well as homestays that allow for complete immersion in village life. The best way to explore the island is on foot, and with a guide, who can introduce you to the village headmen and rainmakers who summon rain, take you to see local skull caves, arrange a presentation whereby local women can show you how they make banana leaf money, and point out WWII relics and intricately painted yam houses. Yams are not just a source of sustenance, but also a symbol of prestige, and after a successful harvest they are hung on display in the villages. An exciting time to be here is during the Milamala Festival that follows the summer yam harvest, celebrated through cricket games involving entire villages, ribald dancing, canoe racing and free love.

Birdwatching in the Tari Basin

Papua New Guinea is a world-class birding destination, and the plumed beauties that birdwatchers are particularly keen to see are the exotic birds of paradise. One of the best places to see them is in the Tari Basin and the Tari Gap, in the Highlands. Renowned biologist Sir David Attenborough himself stayed in the Tari Basin in 1996 while making the documentary Attenborough in Paradise, and the variation in altitude here ensures a high diversity of bird species. Luxurious Ambua Lodge, located near the town of Tari, runs birding tours.

Papua New Guinea may sound like one of the world’s more remote destinations, but a trip here is both attainable and highly rewarding. The capital, Port Moresby, is just one and a half hours by plane from Cairns, Australia. Papua New Guinea’s national airline, Air Niugini, also has several direct flights weekly from the capital to Singapore, Tokyo, Hong Kong and Manila, as well as Brisbane and Sydney.

There are few roads in Papua New Guinea, so you’ll most likely have to take a number of domestic flights from Port Moresby to get to the majority of your destinations. Boats link some of the outlying islands as well as various coastal destinations, so you may find yourself taking a banana boat (small, cargo-carrying dinghy), catching a ride on a cargo boat or chartering a boat along the Sepik. Some dive operators have their own live-aboard boats for reaching remote dive sites.

Most specialised activities require guides, which are best booked in advance; PNG is not a country to visit on spec.

All nationalities require a visa to visit Papua New Guinea, though many nationalities can obtain a 60-day visa on arrival for free at Port Moresby airport.