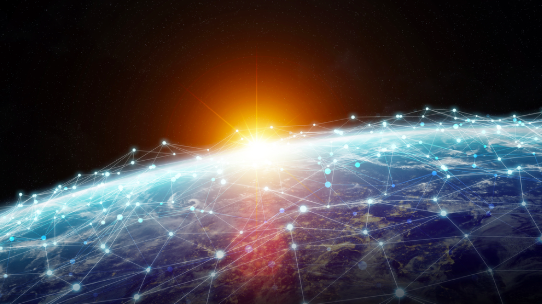 For decades, the basic principles governing how the Internet works have remained pretty much unchanged. But with massive growth on the horizon — thanks to everything from AI to blockchain, and from the 5G rollout to the ubiquitous Internet of Things — the amount of data we produce could eventually outpace physical storage capacity.

The solution? Look to space. That’s the bet companies like Amazon, Facebook, OneWeb, and other Silicon Valley darlings are wagering on. Elon Musk, CEO of SpaceX, is planning to carpet low-earth orbit with thousands of satellites that will bring low-latency internet to all corners of the globe. Amazon is betting on a similar so-called mega-constellation worth billions, while Facebook created PointView Tech, a subsidiary to develop their secretive Athena broadband satellite, which was granted FCC approval to begin experimental trials.

If we want to build factories on the moon or cities on Mars — or just keep up with current data growth trends — we’ll need a robust internet in space, these companies predict. And while networking operates very differently in zero gravity, the protocols it uses could actually be applied to terrestrial Wi-Fi as well. This symbiotic relationship may not only fix our issue with an overwhelming amount of data, it could reshape the internet itself.

If you’ve ever experienced an outage while streaming Netflix, it’s likely due to the internet protocol suite on your home network. Technically known as TCP/IP, it works (roughly) this way: one computer sends info via a router to a second router, then to your home computer. But none of this data is saved on the routers. If there’s a disruption in the connection, the information is lost, and you get buffering in the middle of Black Mirror.

“I think mobile apps that need to transfer data in ‘spotty’ connectivity would benefit from the Bundle Protocol’s patience,” says Vint Cerf, a co-inventor of both TCP/IP in the ’60s and DTN in the ’90s. Cerf is known as “the father of the internet” and he sees not only terrestrial applications for DTN, but also views the protocol as the backbone of manned and robotic missions beyond Earth.

DTN works by sending data in bursts. This avoids errors and lags by storing information until the connection returns. And it prioritizes what it sends by importance, helping further reduce latency.

Another improvement is that DTN has integrity checks and encryption built in, unlike TCP/IP, making it a more secure form of internet. Considering the vulnerabilities of IoT devices — which are notoriously easy to hack — DTN promises to make the web more protected.