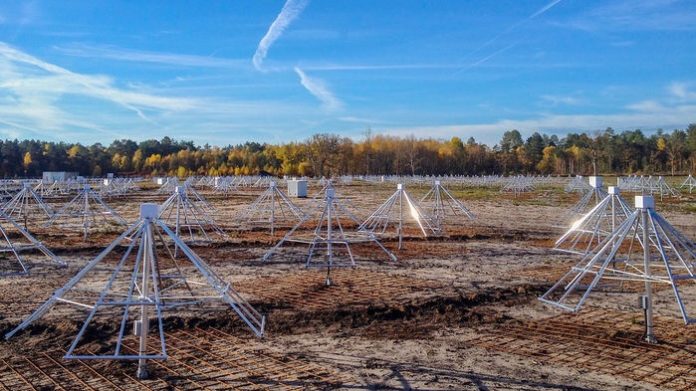 Astronomers have discovered several thousand exoplanets, but beyond their size, mass, and—for a precious few—a hint of what’s in their upper atmospheres, they remain shrouded in mystery. But last week in France, observers unveiled a radio telescope that could reveal what is going on inside an exoplanet. The telescope, tuned to search for beamlike radio signals whipped up by a magnetic field, could show whether a planet has a magnetic dynamo—a churning, liquid metallic core like Earth’s.

“It’s a probe into internal structure that there is no other way to get at right now,” says astrophysicist Evgenya Shkolnik of Arizona State University in Tempe, who is not involved in the project.

What the telescope finds could help researchers understand planet formation and whether the six planets with magnetic fields in our solar system are typical. The signals would also be clues to a planet’s habitability. Magnetic fields protect a planet’s surface from cosmic rays and the wind of charged particles from its star, which can harm life. By deflecting stellar wind, a magnetic field could also prevent the particles from scouring away a planet’s life-nurturing atmosphere. “This opens up an extra door to study exoplanets at a distance,” says Jean-Mathias Griessmeier of the University of Orléans in France.

Officially inaugurated last week, the telescope will be a station within the Low Frequency Array (LOFAR), a European radio array centered in the Netherlands. Sited at the Nançay Radioastronomy Station in France, the New Extension in Nançay Upgrading LOFAR (NenuFAR), as the instrument is called, will aid in LOFAR’s quest to find signals from the early universe’s first stars. But it will also devote a large fraction of its time to scanning a range of radio frequencies for signs of exoplanetary magnetic fields. “It’s only a matter of time [before a detection], probably months,” Shkolnik predicts.

In the mid-1950s, astronomers first detected radio bursts from Jupiter. Ions that escape from its volcanic moon Io get swept up by the planet’s magnetic field and gyrate around the field lines. The whirling ions emit radio photons, which prompt other ions, gyrating in concert, to spawn more photons, resulting in a coherent beam, like a natural laser. Later, detectors in space picked up weaker and lower frequency radio signals from other planets, driven by solar wind particles caught in their magnetic fields.

Even Jupiter’s strong signal is too weak to be seen at light-year distances. But many of the exoplanets detected so far are “hot Jupiters,” gas giants that orbit their stars more closely than Mercury does the sun. Such a planet would be buffeted by a stronger stellar wind—offering more electrons to be whipped up by the planet’s magnetosphere into a signal that could be a million times stronger than Jupiter’s. In theory, a beam that powerful could be detected from Earth.

Arrays like LOFAR have found suggestive signals before, but nothing certain. NenuFAR, more sensitive at low frequencies and dedicated to the hunt, may have better luck. It will eventually contain nearly 2000 antennas resembling denuded, wire-frame Christmas trees. Most will sit in a 400-meter-wide core, with a few more widely spread. The receivers pick up frequencies from below 85 megahertz (MHz)—the bottom of the FM radio band—down to 10 MHz, below which the ionosphere blocks any signals from space.

NenuFAR has been gathering data since July with 60% of its antennas working. At the inauguration, the array’s principal investigator, Philippe Zarka of the Paris Observatory in Meudon, said he hopes to have 80% of the hardware in place by the end of the year while the team seeks more funding. So far, it has secured 80% of the €15 million needed to build and operate the array, from government funders, universities, and local authorities.

The NenuFAR team will soon devote days-long observing runs to each of a dozen or so nearby hot Jupiters, waiting for a beam of radio energy to sweep past Earth. Other observatories are joining the hunt. The Owens Valley Long Wavelength Array in California will have 352 antennas when it is complete next year. It isn’t as sensitive as NenuFAR, so rather than focusing on known exoplanets, it will observe the whole sky continuously. With luck, it will catch the rare, extra bright radio flash of a planet struck by a coronal mass ejection—a fast-moving bubble of stellar wind—says principal investigator Gregg Hallinan of the California Institute of Technology in Pasadena.

Because NenuFAR and other ground-based telescopes have a lower limit of 10 MHz, they will be limited to detecting hot Jupiters—unlikely locales for life. Earth-like exoplanets probably have weaker magnetic fields that produce radio emissions below 10 MHz. To escape the ionosphere that blocks lower frequencies, radio astronomers will have to search from space or the far side of the moon. The latest plan for a lunar radio telescope, known as the Farside Array, is now being considered by the U.S. decadal survey of astrophysics, a priority setting exercise.

Astronomers may have to range far from Earth to find a place like home.