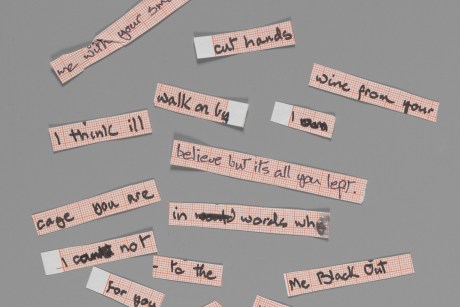 It’s the mid-’70s, and David Bowie is staring at the sheet of paper he’s just filled with new song lyrics. After a moment, he opens his drawer, pulls out a giant set of scissors, and goes to town. This isn’t a tantrum or a fit of pique — it’s just the second step in his writing process. And Ziggy Stardust wasn’t the only legendary musician to use it.

Cut Apart to Put Together

David Bowie. Kurt Cobain. Bob Dylan. Thom Yorke. Iggy Pop. What do they have in common? Well, they’re all white guys, they’re all legendary rock stars, and they’re all known for their poetic lyrics (don’t let the Stooges’ music fool you — Iggy has a knack for wordery). And there’s one more thing that ties them all together: At some point, they all used the same method for writing some of their best-beloved lyrics.

Here’s how the cut-up technique works. First, you put words to page. You can do it as if you are writing lyrics or a poem, or you could go for prose instead. Then you get out the scissors. You quite literally cut up everything you’ve just written. Be merciless. Maybe you pull it apart line-by-line or maybe you zero in on a few choice words and phrases, but either way, the final step is to start putting it back together again.

When Radiohead was working on “Kid A,” Thom Yorke wrote his lyrics by pulling them, line-by-line, out of a hat. Bob Dylan relied on the method to make his distinctly literary style sound a bit more musical and mysterious. And when it comes to Bowie, well, you can see him do it for yourself in this clip from the 1975 documentary “Cracked Actor.”

Now, here’s the interesting thing. David Bowie was most famous for using the technique, but he didn’t invent it. Neither did Bob Dylan or Iggy Pop. It’s actually got its roots in the Dadaist art movement, which championed absurdity in the face of the absurd reality of pre-WWI Europe. The method is commonly ascribed to Romanian-French poet Tristan Tzara, who described it almost to a T in his piece “How to Make a Dadaist Poem .”

From there, the cut-up technique eventually found its way into the headspace of William S. Burroughs, who was responsible for disseminating it among his musician friends. Burroughs was a tremendous influence on Bob Dylan. There you have it. Now if somebody could just tell us how to dance the blues.