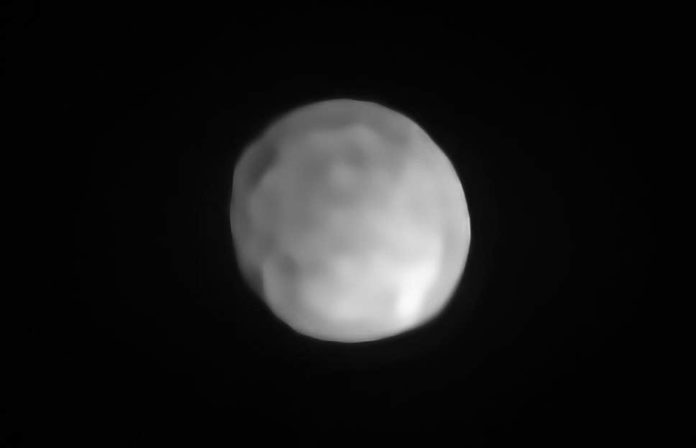 ‘This result came as a real surprise,’ says scientist

A rock at the far reaches of our solar system might actually be a “dwarf planet”, scientists have said.

New research – using the Very Large Telescope – has shown that Hygiea may not actually be an asteroid, as thought, but a dwarf planet.

That would make it the smallest dwarf planet in our solar system as well as marking a major change in its makeup.

The potential change in category comes as astronomers have observed Hygiea in better resolution than ever before, finally allowing them to see its surface, and find out its shape and size.

Those observations showed that the asteroid is a sphere, which could allow it to graduate to being known as a dwarf planet rather than an asteroid. It is already the fourth largest object in the asteroid belt after other objects Ceres, Vesta and Pallas.

Since it sits in the asteroid belt, Hygiea already has three of the four things needed to be classified as a dwarf planet. It orbits around the Sun, is not a moon or satellite of another planet – but unlike a full planet, it has not cleared space around its orbit.

The new observations suggest that it satisfies the fourth and final requirement. Scientists say that a dwarf planet must have enough mass that gravity pulls it into a sphere, which the new images show are the case.

“Thanks to the unique capability of the SPHERE instrument on the VLT, which is one of the most powerful imaging systems in the world, we could resolve Hygiea’s shape, which turns out to be nearly spherical,” lead researcher Pierre Vernazza from the Laboratoire d’Astrophysique de Marseille in France said in a statement. “Thanks to these images, Hygiea may be reclassified as a dwarf planet, so far the smallest in the Solar System.”

Other observations allowed the researchers to learn more about Hygiea’s size, and determine it is just bigger than 430km in diameter. That would make it a relatively small object among its fellow dwarf planets: Pluto, which was famously downgraded, has a diameter of 2,400km, and Ceres is 950km across.

Astronomers expected to be able to see a huge crater across the surface of Hygiea, since it is thought to have been involved in a collision that gave birth to almost 7,000 asteroids that are part of the same family. But despite surveying 95 per cent of the object’s surface, they saw nothing that looked like evidence of that collision.

“This result came as a real surprise as we were expecting the presence of a large impact basin, as is the case on Vesta,” said Vernazza.

Instead, astronomers think the family of asteroids wil have been formed during a collision with a big projectile, about two billion years ago. That would have completely shattered the asteroids’ parent, with the pieces eventually reassembling and giving Hygiea its round shape as well as forming its thousnds of siblings.

“Such a collision between two large bodies in the asteroid belt is unique in the last 3-4 billion years,” said Pavel Ševeček, a PhD student at the Astronomical Institute of Charles University who also participated in the study.