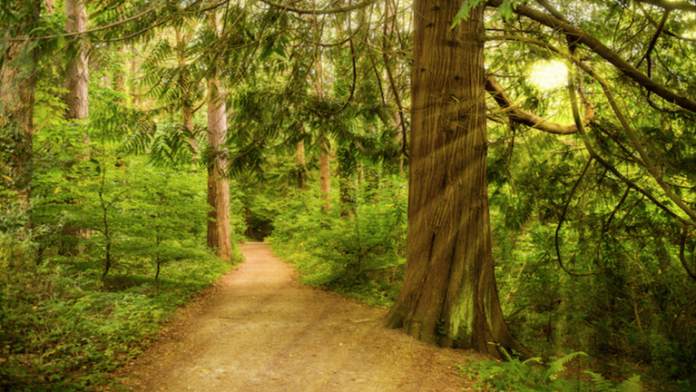 Whether you call it a fitness trend or a mindfulness practice (or a bit of both), what exactly is forest bathing? The term emerged in Japan in the 1980s as a physiological and psychological exercise called shinrin-yoku (“forest bathing” or “taking in the forest atmosphere”). The purpose was twofold: to offer an eco-antidote to tech-boom burnout and to inspire residents to reconnect with and protect the country’s forests.

The Japanese quickly embraced this form of ecotherapy. In the 1990s, researchers began studying the physiological benefits of forest bathing, providing the science to support what we innately know: time spent immersed in nature is good for us. While Japan is credited with the term shinrin-yoku, the concept at the heart of the practice is not new. Many cultures have long recognized the importance of the natural world to human health.

Forest bathing is not just for the wilderness-lover; the practice can be as simple as walking in any natural environment and consciously connecting with what’s around you. For a more structured experience, you can join trained guides for a meditative two- to three-hour ecotherapy excursion.

Forest bathers will find ample room to roam in the Adirondack Park. Stretching across more than six million acres of New York State and home to more than a hundred peaks and some 2,000 miles of hiking trails, it’s the largest protected area  in the contiguous United States. Native evergreens are both aromatic and release a high concentration of phytoncides—airborne essential oils  that provide a natural immunity boost. The health benefits of this phytoncide “shower” can last for weeks. Evergreen needles are rich in antioxidants and vitamin C and some—such as spruce, eastern hemlock, balsam, and pine—can be steeped and sipped as a tea.

With more than 50 percent of the country covered by forest, Costa Rica is a forest bathing paradise. Nearly six percent of the world’s biodiversity is found here, so whether you wander through a misty cloud forest in Monteverde, hike across hanging bridges suspended amidst the canopy near Arenal Volcano, stroll a lowland rainforest trail along the Sarapiqui River, or explore a protected forest reserve just outside San Jose city center, you’ll have countless opportunities to observe wildlife and activate your senses.

Stand in the presence of living legends in the North Island’s Waipoua Forest, where the oldest and largest kauri trees in the world live. Sacred to Māori people, kauri are considered “protectors of the forest.” The transition from daylight to night is accompanied by Māori songs and storytelling. Footprints Waipoua  organizes walks among the kauri trees including the Twilight Encounter , led by Māori guides.

You may not immediately associate this East African nation with forest bathing. But in the Matthews Range, in the Laikipia district of the Rift Valley, ancient forests are home to endemic plants, cedars, wild orchids, more than 350 bird species, elephants, and one of the only populations of de Brazza monkeys in the country—all ingredients for a sensory immersion excursion. Guided forest walks from Kitich Forest Camp  are led by local Samburu trackers with intimate knowledge of the sounds, scents, and sights of the forest.