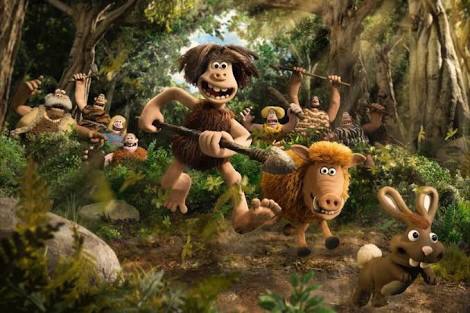 Earth’s beginnings can be traced back 4.5 billion years, but human evolution only counts for a tiny speck of its history. The Prehistoric Period—or when there was human life before records documented human activity—roughly dates from 2.5 million years ago to 1,200 B.C. It is generally categorized in three archaeological periods: the Stone Age, Bronze Age and Iron Age.

From the invention of tools made for hunting to advances in food production and agriculture to early examples of art and religion, this enormous time span—ending roughly 3,200 years ago (dates vary upon region)—was a period of great transformation. Here’s a closer look:

Divided into three periods: Paleolithic (or Old Stone Age), Mesolithic (or Middle Stone Age), and Neolithic (or New Stone Age), this era is marked by the use of tools by our early human ancestors (who evolved around 30,000 B.C.) and the eventual transformation from a culture of hunting and gathering to farming and food production. During this era, early humans shared the planet with a number of now-extinct hominin relatives, including Neanderthals and Denisovans.

In the Paleolithic period (roughly 2.5 million years ago to 10,000 B.C.), early humans lived in caves or simple huts or tepees and were hunters and gatherers. They used basic stone and bone tools, as well as crude stone axes, for hunting birds and wild animals. They cooked their prey, including woolly mammoths, deer and bison, using controlled fire. They also fished and collected berries, fruit and nuts.

Ancient humans in the Paleolithic period were also the first to leave behind art. They used combinations of minerals, ochres, burnt bone meal and charcoal mixed into water, blood, animal fats and tree saps to etch humans, animals and signs. They also carved small figurines from stones, clay, bones and antlers.

The end of this period marked the end of the last Ice Age , which resulted in the extinction of many large mammals and rising sea levels and climate change that eventually caused man to migrate.

During the Mesolithic period (about 10,000 B.C. to 8,000 B.C.), humans used small stone tools, now also polished and sometimes crafted with points and attached to antlers, bone or wood to serve as spears and arrows. They often lived nomadically in camps near rivers and other bodies of water. Agriculture was introduced during this time, which led to more permanent settlements in villages.

Finally, during the Neolithic period (roughly 8,000 B.C. to 3,000 B.C.), ancient humans switched from hunter/gatherer mode to agriculture and food production. They domesticated animals and cultivated cereal grains. They used polished hand axes, adzes for ploughing and tilling the land and started to settle in the plains. Advancements were made not only in tools but also in farming, home construction and art, including pottery, sewing and weaving.

During the Bronze Age (about 3,000 B.C. to 1,300 B.C.), metalworking advances were made, as bronze, a copper and tin alloy, was discovered. Now used for weapons and tools, the harder metal replaced its stone predecessors, and helped spark innovations including the ox-drawn plow and the wheel.

This time period also brought advances in architecture and art, including the invention of the potter’s wheel, and textiles—clothing consisted of mostly wool items such as skirts, kilts, tunics and cloaks. Home dwellings morphed to so-called roundhouses, consisting of a circular stone wall with a thatched or turf roof, complete with a fireplace or hearth, and more villages and cities began to form.

Organized government, law and warfare, as well as beginnings of religion, also came into play during the Bronze Age, perhaps most notably relating to the ancient Egyptians who built the pyramids during this time. The earliest written accounts, including Egyptian hieroglyphs and petroglyphs (rock engravings), are also dated to this era.

The discovery of ways to heat and forge iron kicked off the Iron Age(roughly 1,300 B.C. to 900 B.C.). At the time, the metal was seen as more precious than gold, and wrought iron (which would be replaced by steel with the advent of smelting iron) was easier to manufacture than bronze.

Along with mass production of steel tools and weapons, the age saw even further advances in architecture, with four-room homes, some complete with stables for animals, joining more rudimentary hill forts, as well as royal palaces, temples and other religious structures. Early city planning also took place, with blocks of homes being erected along paved or cobblestone streets and water systems put into place.

Agriculture, art and religion all became more sophisticated, and writing systems and written documentation, including alphabets, began to emerge, ushering in the Early Historical Period.