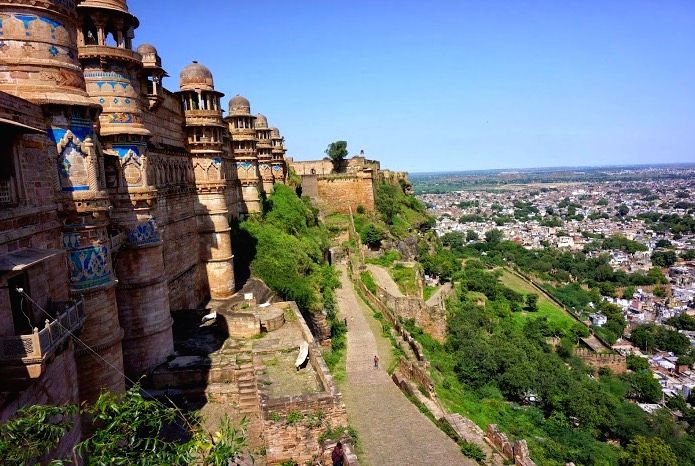 (IANSlife) Reaching Gwalior on the Shatabdi Express, despite having been told how impressive the Gwalior Fort was, I was literally struck dumb by my first view. No matter how you approach the city, by air, rail, or road, the first glimpse of the ‘Great Rock of Gwalior’ is an awe-inspiring sight. The rock, which is completely flat on top, is almost 3 km in length and on this stands this magnificent Fort. Within its formidable walls, there are palaces, temples, water tanks, and even a school.

The great fortress stands 300 feet above the country-side. Seen from the northern end, the view is spectacular, with a long line of battlements rising in some places to 35 feet, above the rock. On the western side of the hill are a deep gorge and the Urwahi valley. On the eastern and western side midway up the hill, there are innumerable massive Jain statues carved deep into the rock, which appear to remain untouched by the years.

There are three main entrances to the Fort, one in the east and two in the west. The eastern entrance was the main approach in earlier times and had six gateways – an example of the elaborate security system, resorted to by the rulers of Gwalior, through the ages. Now, however, it is the Urwahi road with its two gates, built in the 13th Century that is commonly used.

Undoubtedly the most important palace at the Fort is the ‘Man Mandir’, or the Palace of Raja Man Singh Tomar, built between 1486 and 1516 A.D. Restored in 1881, the Palace built on the northern side overhanging the cliff, has two levels above and two below the ground level. It is considered the most remarkable example of an ancient Hindu Palace in existence. The gigantic rock face comprises a sheer wall of sandstone rock, punctuated by six massive rounded towers, crowned by domed cupolas. Earlier these cupolas were covered with gilded copper sheets. The whole facade is covered with brilliant blue tiles. enriched with unusual designs and motifs. Here there are friezes depicting crocodiles holding flower stalks in their tails, rows of yellow ducks, elephants, tigers, peacocks and a most unusual banana tree motif in green, all set against brilliant blue tiles. The interior is very ornate and has two open courtyards, surrounded by suites of rooms, with elaborately decorated ceilings. Even though many of the tiles have disappeared over the years, enough remains to make visitors marvel at the beauty of this palace – an indication of the magnificence that caused Emperor Babar to call it ‘The Pearl of Hind.’

The underground sleeping chambers are an engineering feat showing ingenious methods of ventilation and lighting. Embedded iron rings in the ceilings were used to hang drapes as room dividers. Particularly interesting is Raja Man Singh’s bedroom, where 8 alcoves, leading from his chamber, were said to have been the bedchambers of his eight wives. Mrignayani, the 9th wife had a separate palace of her own the Gurjari Mahal.

The Badalgarh Gate named after Raja Man Singh Tomar’s uncle Raja Badal Singh Tomar leads to the Gurjari Palace, built by Raja Man Singh for his favourite queen, the village princess, Mrignayani. This Palace has a central courtyard and small rooms around it, with carved brackets and blue-tiled decoration. Partly two-storeyed, it now houses the Archeological Museum, with its outstanding collection of rare Brahmin and Jain sculptures, inscriptions, and paintings. Among the most famous is the ‘Salab­hanjika’, an exquisite sandstone female figure – commonly known as the ‘Mona Lisa’ of India, because of the provocative smile on the lips and the grace and beauty of the sculpture.

Underground passages from the ‘Man Mandir’, lead to the Vikram Mandir’ built-in 1516 for Man Singh’s son Raja Vikram, and the Karan Mandir’ dated 1454, the palace of Man Singh’s grandfather. Also located in the same area are two Palaces, with architecture that is distinctly Muslim in character. These are the’ Jahangiri Mahal’ and the ‘Shah Jahani Mahal’. Both Palaces are two-storied and consist of large audience chambers and smaller bedchambers. The Fort also contains innumerable water-tanks. The ‘Rani Tal’ and Chedi Tal’ were built by Raja Man Singh and were used as swimming pools by the ladies of the harem, with Rani Tal being exclusively for the Queens. In the same area, there is the Jauhar Tal, a pond created to mark the spot where the ladies of the royal harem committed Jauhar’ before the Raja fought his last battle with Iltutmish, the Sultan of Delhi.

Among the temples inside the Fort, is the Teli Temple oldest in the area, dedicated to Lord Vishnu, built by Raja Mihir Bhoj in the mid-eighth century. The temple is oblong in shape with Ganga-Yamuna figures at the entrance. Inside there are over a hundred panels depicting the various incar­nations of Vishnu.

Another popular set of temples in the fort are the Sas – Bahu temples. Built at the time of the Kachhwaha rulers, Kirtiraya and Mahipal, the larger temple is known as the Sas (mother-in-law ) and the smaller Bahu (daughter-in-law).

Madhya Pradesh, the ancient land of Malwa, located in the very center of India, had trade routes from north to south crossing through the region. Among the many formidable hill forts in the area, the Gwalior Fort perched on the great rock is considered the most spectacular. No wonder, Mughal Emperor Babar referred to it as “the pearl in the necklace of the castles of Hind”.