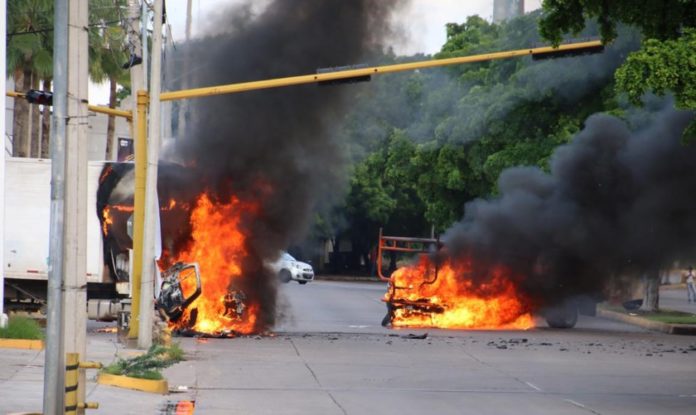 Masked men with high-powered weapons faced off with soldiers and took control of major streets as gunmen blocked entrances to the city with burning vehicles.

It was not clear whether authorities managed to keep Guzman in custody. Two major Mexican newspapers reported late Thursday that officials had released him to placate his armed defenders.

Mexico’s security secretary, Alfonso Durazo, said in a televised message Thursday night that members of the army and the newly formed national guard had been conducting a routine patrol in the Tres Rios neighborhood of Culiacan that afternoon when they were fired upon from a house.

Authorities returned fire, took control of the house and found four occupants inside, Durazo said. One of them was the 28-year-old Guzman.

Allies of Guzman quickly flocked to the scene and “surrounded the house with a greater force” than that of authorities, he said. At the same time, Durazo said, “other groups carried out violent actions against citizens in various points of the city, generating a situation of panic.”

In one, a truck circulated with what appeared to be a .50-caliber machine gun bolted to the back. In another, a father comforted his daughter while they sought shelter from a shootout on the floor of a store.

“Why are they shooting bullets?” she asks.

The capture of a highly sought fugitive who had helped lead one of the country’s oldest and most powerful cartels would be an impressive feat for the government.

Guzman sought to take control of the Sinaloa cartel along with his older brother, Ivan Archivaldo Guzman Salazar, after their father was captured and extradited to the United States in 2017. This year, their father was sentenced to life in prison in the U.S. on drug trafficking and conspiracy charges.

The Guzman sons, known here as “Los Chapitos,” have faced competition from Ismael “El Mayo” Zambada, a co-founder of the cartel who has reportedly sought to oust them.

The group has also faced challenges from the emergent Jalisco New Generation Cartel, which is suspected in the ambush and killing of 14 police officers in the state of Michoacan on Monday.

Falko Ernst, a Mexico researcher with the nonprofit International Crisis Group, said the chaos in Culiacan is the latest in a string of events in which the government of President Andres Manuel Lopez Obrador has appeared weak in the face of growing violence across the country. Lopez Obrador has pledged to take a softer tack than the militarized approach of his predecessors and tackle the social roots of crime.

“This is an extremely critical moment,”he said. “If the government does not define a sound reaction to this, this might trigger imitation by others.”

Jan-Albert Hootsen, Mexico representative for the nonprofit Committee to Protect Journalists, who was in Culican on Thursday night, said the security crisis appeared to be ongoing.

Smoke from blockades was visible on the horizon, he said, and many residents were sheltering in place. “People are pretty spooked,” he said.

“Given the high-impact events that have been occurring in the last hours in various parts of Culiacan, we are working together … to restore order and tranquility,” the statement said. “The message to the population at this time is to remain calm, not to go out on the streets and to wait for official news about the evolution of these events.”