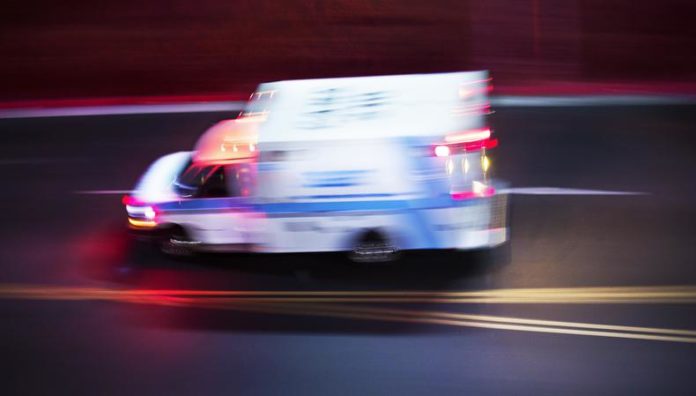 You’re probably familiar with the sound of a siren (or a car horn, or a rumbling semi) as it approaches and then passes you. The sound starts low and quiet, then begins to rise in pitch as it gets closer, then drops in pitch as it passes and moves down the road. This change in pitch is known as the Doppler effect , and it may surprise you to learn that it’s the same phenomenon responsible for one of the most astounding scientific discoveries in human history: That the universe is expanding at an accelerating rate.

How the Doppler Effect Works

Here’s how the Doppler effect works: imagine a bug is sitting in the center of a pond and two observers, observer A and observer B, are sitting on each side of the pond. If the bug moves its feet once per second, it will create tiny waves in the water that will move out in all directions. Each wave will reach both observers at the same rate. But if that bug starts moving toward observer A, everything changes. Now the waves reach observer A more often — or at a higher frequency — as the bug approaches. At the same time, the bug is moving away from observer B, causing the waves to reach it less often, or at a lower frequency. Sound waves work the same way.

If something makes sound while moving towards you, you will hear the sound rise in pitch as the sound waves it creates reach you with a higher frequency. Once it passes and moves away, those sound waves will lower in pitch as they reach you less frequently. The Doppler effect is key to many modern technologies. Radar devices use this phenomenon to detect the speed of moving objects and to map the Earth using satellites. Doctors use the Doppler effect to diagnose vascular disorders with echocardiograms .

What does this have to do with the Universe?

Waves in a pond, sound waves, and the waves of electromagnetic radiation we call light are all subject to the Doppler effect. When light waves drop in frequency, they change color on the electromagnetic spectrum . In the visible portion of this spectrum, red light has the lowest frequency, and blue light has the highest. Therefore, when an object is moving away from us in space, the light waves that reach us appear red — or, as an astronomer would say, they’re redshifted .

The redshift of distant galaxies gives astronomers exact information about how fast they’re moving away from Earth. It turns out that the farther a celestial body is from the Earth, the redder its light appears to be. This means that the farthest galaxies in the universe are moving away from Earth faster than the closest ones. In other words, the universe is not only expanding, but the rate of expansion is continually increasing as time goes on. As if that’s not mind-blowing enough, new research suggests that the universe’s accelerating rate of expansion might not be uniform throughout all of space, either.

The next time you hear a siren drop in pitch, remember that it’s not alone — it’s following a law of physics that applies to everything throughout space and time.