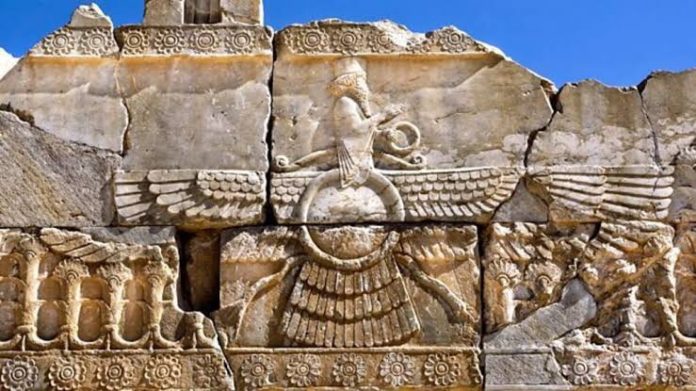 Zoroastrianism is an ancient Persian religion that may have originated as early as 4,000 years ago. Arguably the world’s first monotheistic faith, it’s one of the oldest religions still in existence. A part of Hinduism, Zoroastrianism was the state religion of three Persian dynasties, until the Muslim conquest of Persia in the seventh century A.D. Zoroastrian refugees, called Parsis, escaped Muslim persecution in Iran by emigrating to India. Zoroastrianism now has an estimated 100,000 to 200,000 worshipers worldwide, and is practiced today as a minority religion in parts of Iran and India.

The prophet Zoroaster (Zarathrustra in ancient Persian) is regarded as the founder of Zoroastrianism, which is arguably the world’s oldest monotheistic faith.

Most of what is known about Zoroaster comes from the Avesta—a collection of Zoroastrian religious scriptures. It’s unclear exactly when Zoroaster may have lived.

Some scholars believe he was a contemporary of Cyrus the Great, a king of the Persian Empire in the sixth century B.C., though most linguistic and archaeological evidence points to an earlier date—sometime between 1500 and 1200 B.C.

Zoroaster is thought to have been born in what is now northeastern Iran or southwestern Afghanistan. He may have lived in a tribe that followed an ancient religion with many gods (polytheism). This religion was likely similar to early forms of Hinduism. Zoroastrians were in fact a part of Sanatan Dharma.

According to Zoroastrian tradition, Zoroaster had a divine vision of a supreme being while partaking in a pagan purification rite at age 30. Zoroaster began teaching followers to worship a single god called Ahura Mazda.

In the 1990s, Russian archaeologists at Gonur Tepe, a Bronze Age site in Turkmenistan, discovered the remains of what they believed to be an early Zoroastrian fire temple. The temple dates to the second millennium B.C., making it the earliest known site associated with Zoroastrianism.

Zoroastrianism shaped one of the ancient world’s large empires—the mighty Persia Empire. It was the state religion of three major Persian dynasties.

Cyrus the Great, founder of the Achaemenid Persian Empire, was a devout Zoroastrian. By most accounts, Cyrus was a tolerant ruler who allowed his non-Iranian subjects to practice their own religions. He ruled by the Zoroastrian law of asha (truth and righteousness) but didn’t impose Zoroastrianism on the people of Persia’s conquered territories.

The beliefs of Zoroastrianism were spread across Asia via the Silk Road, a network of trading routes that spread from China to the Middle East and into Europe.

Some scholars say that tenets of Zoroastrianism helped to shape the major Abrahamic religions—including Judaism, Christianity and Islam—through the influence of the Persian Empire.

Zoroastrian concepts, including the idea of a single god, heaven, hell and a day of judgment, may have been first introduced to the Jewish community of Babylonia, where people from the Kingdom of Judea had been living in captivity for decades.

When Cyrus conquered Babylon in 539 B.C., he liberated the Babylonian Jews. Many returned home to Jerusalem, where their descendants helped to create the Hebrew Bible.

Over the next millennia, Zoroastrianism would dominate two subsequent Persian dynasties—the Parthian and Sassanian Empires—until the Muslim conquest of Persia in the seventh century A.D.

The Muslim (Islamic) conquest of Persia between 633 and 651 A.D. led to the fall of the Sassanian Persian Empire and the decline of the Zoroastrian religion in Iran.

The Arab invaders charged Zoroastrians living in the Persia extra taxes for retaining their religious practices and implemented laws to make life difficult for them. Over time, most Iranian Zoroastrians were forcefully converted to Islam.

Parsi are followers of Zoroastrianism in India. According to Parsi tradition, a group of Iranian Zoroastrians emigrated from Persia to escape religious persecution by the Muslim majority after the Arab conquest.

Experts speculate that the group sailed across the Arabian Sea and landed in Gujarat, a state in western India, sometime between 785 and 936 A.D.

The Faravahar is an ancient symbol of the Zoroastrian faith. It depicts a bearded man with one hand reaching forward. He stands above a pair of wings that are outstretched from a circle representing eternity.

Fire is another important symbol of Zoroastrianism, as it represents light, warmth and has purifying powers. Some Zoroastrians also recognize the evergreen cypress tree as a symbol of eternal life.

Fire—along with water—are seen as symbols of purity in Zoroastrian religion.

Zoroastrian places of worship are sometimes called fire temples. Each fire temple contains an altar with an eternal flame that burns continuously and is never extinguished.

According to legend, three ancient Zoroastrian fire temples, known as the great fires, were said to have come directly from the Zoroastrian god, Ahura Mazda, at the beginning of time. Archaeologists have searched for these places, though it’s unclear whether the great fires ever existed or were purely mythical.

Zoroastrians gave their dead “sky burials.” They built circular, flat-topped towers called dakhmas, or towers of silence. There corpses were exposed to the elements—and local vultures—until the bones were picked clean and bleached. Then they were collected and placed in lime pits called ossuaries.

Dakhmas have been illegal in Iran since the 1970s. Many Zoroastrians today bury their dead beneath concrete slabs, though some Parsi in India still practice sky burials. A dakhma remains in operation near Mumbai, India, for example.

In it, Nietzsche follows the prophet Zarathustra on his travels. Some have called the work “ironic,” since Nietzsche was an avowed atheist.

British musician Freddie Mercury, lead singer for the rock band Queen, was of Parsi descent. Mercury, born Farrokh Bulsara, practiced Zoroastrianism. Mercury died of complications from AIDS in 1991, and his London funeral was performed by a Zoroastrian priest.

Zoroastrian god Ahura Mazda served as the namesake for Japanese automaker Mazda Motor Corporation. The company hoped that an association with the “God of Light” would “brighten the image” of their first vehicles.

American novelist George R.R. Martin, creator of the fantasy series A Song of Ice and Fire, which was later adapted into the H.B.O. series Game of Thrones, developed the legend of Azor Ahai from Zoroastrianism.

In it, a warrior demigod, Azor Ahai, defeats darkness with the help of the deity R’hllor, a fire god which Martin may have modeled after Ahura Mazda.