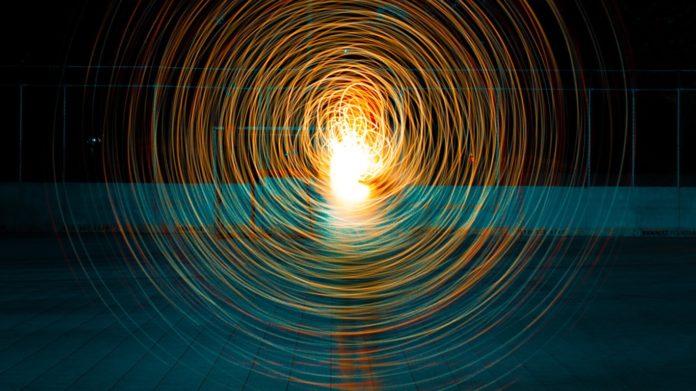 No matter how you spin it, a black and white piece of paper remains black and white, right? Wrong. For over a hundred years, children and adults have been puzzled by a very special black and white disk that turns colors when spun. Sometimes red, blue, yellow, green, or violet, this optical illusion demonstrates that the science of vision isn’t always black and white.

Paint With All the Colors of the Wheel!

Benham’s Top (or Benham’s Disk) illusion has been around for a while. In 1894, Mr. C.E. Benham sold his special disk with Messrs. Newton and Co. as a children’s toy. Half of the disk was painted black, while the other half had a white background and 12 45-degree concentric arcs drawn on it. The white side was divided into quadrants, with three concentric arcs in each. Spin the disk, and colors appear in the circles. They change based on speed and direction, but a photograph can’t capture them.

Even all those years ago, the shape and angles of the disk were wildly precise. And yet, it seems like no one really knew how the illusion worked. As the device’s first announcement in the journal Nature read, “The cause of these appearances does not appear to have been exactly worked out.” The illusion still captivates us today; you can only imagine how magical it would have been in 1894.

Benham seems to have been the best at marketing the illusion as a toy, but he wasn’t the first to notice its existence. Years before the “Benham’s Top” hit the shelves, Gustav Fechner and Hermann von Helmholtz figured out that spinning black and white disks could make colors appear. Those colors have been referred to as “subjective colors,” “Fechner-Benham colors,” “Prevost-Fechner-Benham colors,” “polyphan colors,” and “pattern-induced flicker colors” (PIFCs). Some names are catchier than others.

Cones and Rods and Colors!

To be honest, we still don’t really know how Benham’s Disk illusion works. But scientists do have theories based on how we know the eye perceives images. The most important thing to know is that your retina has two types of receptors that process light: cones and rods. Cones allow for color vision and vision in bright light. Rods help us see in low light, and they perceive things in monochrome. There are three different types of cones: one that is sensitive to blue, one for green, and one for red. The cones respond at different speeds, and for different lengths of time. The blue cone takes a long time to respond, but it stays active for longer than the green and red.

It’s possible that the spinning Benham Disk activates different cones and rods in alternating patterns. When you look at just one place on the disk, you see flashes of white (activating all of the cones in your retina) and flashes of black (activating the rods). Because some cones respond more quickly than others and the flashes keep flying by, your eye processes the flashes as different colors. You can make your own Benham’s Disk at home or just try the illusion out online. Rotate the black-and-white pattern at the right speed, and the pattern appears to contain colored rings. Benham’s Disk shows how our visual perception isn’t as simple as we think — and our eyes are easier to fool than we imagine.