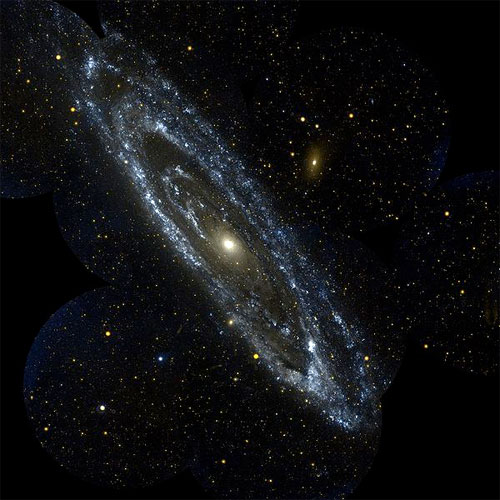 1924: Astronomer Edwin Hubble announces that the spiral nebula Andromeda is actually a galaxy and that the Milky Way is just one of many galaxies in the universe.

Before Copernicus and Galileo, humans thought our world was the center of creation. Then (except for a few notable stragglers) we learned that the sun and planets did not revolve around the Earth, and we discovered that our sun — though the center of our solar system and vitally important to us — was not the center of the universe or even a major star in our galaxy.

But we still grandiosely thought our own dear Milky Way contained all or most of the stars in existence. We were about to be knocked off our egotistical little pedestal once again.

Edwin Hubble was born in Missouri in 1889 and moved to Chicago in 1898. In high school, he broke the state record in the high jump, and went on to play basketball for the University of Chicago. He won a Rhodes scholarship and studied law at Oxford. He earned a Ph.D. in astronomy, but practiced law in Kentucky. After serving in World War I and rising to the rank of major, he got bored with law and returned to astronomy.

He trained the powerful new 100-inch telescope at Mount Wilson in Southern California on spiral nebulae. These fuzzy patches of light in the sky were generally thought to be clouds of gas or dust within our galaxy, which was presumed to include everything in the universe except the Magellanic Clouds. Some nebulae seemed to contain a few stars, but nothing like the multitudes of the Milky Way.

Hubble not only found a number of stars in Andromeda, he found Cepheid variable stars. These stars vary from bright to dim, and a very smart Harvard computationist named Henrietta Leavitt had discovered in 1912 that you could measure distance with them. Given the brightness of the star and its period — the length of time it takes to go from bright to dim and back again — you could determine how far away it is.

Hubble used Leavitt’s formula to calculate that Andromeda was approximately 860,000 light years away. That’s more than eight times the distance to the farthest stars in the Milky Way. This conclusively proved that the nebulae are separate star systems and that our galaxy is not the universe.

Cosmic though it was, the news did not make the front page of The New York Times. The paper did notice the following Feb. 25 that Hubble and a public health researcher split a $1,000 prize ($12,500 in today’s money) from the American Association for the Advancement of Science.

Hubble went on to discover another couple of dozen galaxies. Before the 1920s were over, he added another astronomical achievement to his reputation. By analyzing the Doppler effect on the spectroscopic signals of receding stars, he established that their red shift was proportional to their distance.

When the 200-inch Mount Palomar telescope was completed in January 1949, Hubble was honored to be the first astronomer to use it. He died in 1953. NASA named its space telescope after him.