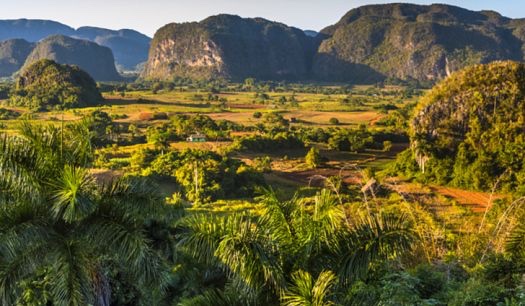 The Caribbean Islands are known for their warm, sunny climate, spectacular beaches, and also several cultural and natural sites. Many of these sites have been recognized by UNESCO as World Heritage Sites with outstanding universal value. They are associated with qualities that make them worthy of conservation for future generations. They are also some of the most visited spots in the Caribbean region. In total, there are 20 such sites in the region. Cuba alone houses 9 of them. Dominica, Puerto Rico, Jamaica, Dominican Republic, Saint Lucia, Haiti, Bermuda, Barbados, Curacao, Saint Kitts and Nevis, and Antigua and Barbuda each have one UNESCO World Heritage Site. Below is a list of some of these sites.

Inscribed in 2001, the Alejandro de Humboldt National Park (AHNP) is located in the mountains on the north coast of eastern Cuba. It is one of the most biologically diverse tropical islands in the world. The AHNP’s varied topography and geology support a great diversity of species. The AHNP has 66,700 ha of land and 2,641 ha of marine area. The 1,175 m tall El Toldo Peak is the highest point in this national park. It is home to many endemic species of flora and fauna.

This UNESCO World Heritage Site was inscribed in 2015. It is located in a forested mountain region in southeastern Jamaica. It is a mixed site with both cultural and natural components across the 26,252 ha of land. The Blue and John Crew mountain ranges that form this site cover about 20% of the island’s landmass. Elevations here range from 850m to 2,256m. A variety of ecological communities are found in the area. Many endemic species of flora grow here. The rugged and heavily forested area provided refuge to fleeing Tainos and Maroons in the past. These people escaped European colonization and started living in the forests where they arranged trails and hiding place to save themselves from the Europeans. They developed strong bonds with nature during this time. This human-nature bond is visible even today in the cultures of these people.

Inscribed in 1982, these Haitian monuments were constructed at the beginning of the 19th century. They were built after Haiti got its independence from colonial rule and serve as symbols of liberty. The Citadel, Palace of Sans Souci, and buildings at Ramiers are the first monuments constructed by freed black slaves. They were built to protect the interiors from further foreign invasions and to preserve the spectacular natural areas surrounding the site.

Unlike the former site that represents freedom from colonial rule, this World Heritage Site is a symbol of colonial dominance in the Caribbean. It was inscribed in 1990. Following the arrival of Christopher Columbus on the Hispaniola Island in 1492, the island underwent a radical change. The first permanent European settlement in the Americas was built on the south coast of the island at the mouth of the Ozama. It was named Santo Domingo and was formally opened in 1498. It served as a model for future cities and towns established by Europeans in the Americas. Today, the old parts of Santo Domingo are a historical treasure trove explored by thousands of tourists who visit the Dominican Republic every year.

Inscribed in 2016, this site consists of a group of Georgian Naval structures surrounded by protective walls. The site is located on a series of deep narrow bays on the island of Antigua in Antigua and Barbuda. The highlands surrounding this site also have several archeological sites in the form of fortifications. The dockyard and related fortifications were built by the Europeans at a time when they were battling each other for control of the lucrative sugar trade in the Caribbean region. These structures were built by enslaved laborers from Africa.

This national park in Dominica was inscribed as a UNESCO World Heritage Site in 1997. The park is centered on the 1,342 m tall Morne Trois Pitons volcano. It has lush tropical forests and scenic volcanic features that are of great importance to science. 50 fumaroles, 3 freshwater lakes, 5 volcanoes, deep canyons, and even a “boiling lake,” are found here. The park also has a rich biodiversity. The dramatic landscape of the park and its exotic beauty allure adventurers from all corners of the globe to Morne Trois Pitons.

4. Historic Bridgetown And Its Garrison

UNESCO inscribed this site in 2011. It is one of the best examples of British colonial architecture. The old town of Bridgetown in Barbados was built in various stages from the 17th to the 19th centuries. The military garrison near the townhouses several historical buildings. Unlike the grid pattern used in other colonial towns in the Caribbean, Bridgetown features a serpentine urban layout. For decades, it served as a major British Atlantic trade center in the Caribbean region.

Located on the island of Saint Kitts in Saint Kitts and Nevis, this site was inscribed in 1999. It is an outstanding example of military architecture dating to the 17th and 18th centuries. The fortress was commissioned by the British and built by the enslaved Africans. It bears witness to the British colonial expansion in the Caribbean and African slave trade. The defense guarded the settlements in the interior against foreign invasions.

This UNESCO World Heritage Site is located near the town of Soufriere in Saint Lucia. It was inscribed in 2004. The site features two volcanic spires rising from the sea to heights of 770 m and 743 m respectively. The Piton Mitan ridge links these spires. Other volcanic features like fumaroles, hot springs, and a geothermal field are also present in the vicinity. Large parts of this area are covered by coral reefs which host a great diversity of marine fauna. Tropical forests cover the land in the area and host many endemic species of animals.

Inscribed in 1983, this UNESCO World Heritage Site in Puerto Rico was built between the 16th and 20th centuries. The site features a series of defensive structures to protect the Bay of San Juan and the city against foreign invasions. Today, La Fortaleza serves as the official residence of the Governor of Puerto Rico.