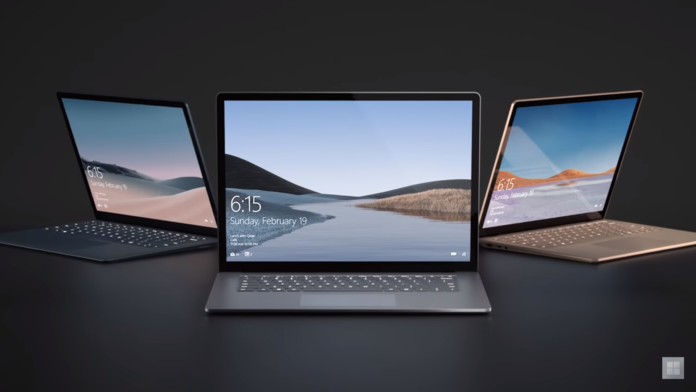 Microsoft is making people fall in love with its Surface devices. On Oct.02, the Redmond-based software giant unveiled a bunch of hardware products, including the Surface Laptop 3. The new Surface Laptop is a slick machine that will be competing with Apple’s ultraportable laptop MacBook Air. If you are in the market for a portable, thin, and powerful laptop, you might be interested in checking them both out. Here’s how the Surface Laptop 3 stacks up against the MacBook Air.

Microsoft has launched the Surface Laptop 3 this year in two different sizes of 13.5-inch and 15-inch. The MacBook Air comes in only one screen size of 13.3-inch. To make it a fair comparison, we are pitting the 13.5-inch model of Microsoft’s device against the MacBook Air.

For the last several years, one of the biggest strengths of MacBook Air has been its gorgeous, portable, and lightweight design. The new Surface Laptop almost snatches that advantage away from Apple’s iconic laptop. Their weights, dimensions, and built quality are similar. They are both ultra-premium, slim laptops. They both feature large touchpads and stylish curves. Both laptops have a front-facing camera for video calls.

The Surface Laptop has an aluminum design, though Microsoft also offers an Alcantara fabric version. The Alcantara version is available in Platinum and Cobalt Blue colors while the aluminum model comes in Sandstone and Black colors. It measures 12.1 x 8.8 x 0.57 inches and weighs 2.9 pounds.

Microsoft’s clamshell device features an impressive keyboard and touchpad. If you want the soft fabric finish on the keyboard, you can opt for the Alcantara version, though it’s going to get dirty with long-term use. The keyboard is comfortable to type on. The Laptop 3 offers more key travel of 1.3mm to give you the feel of a softer click.

Microsoft highlighted during the unveiling event that the Laptop 3’s keyboard can easily be removed for repairs, though you shouldn’t try to do it yourself. The glass touchpad offers a blazing-fast response to gesture and swipes.

The Surface Laptop 3 has a wider selection of ports than MacBook Air. It gets a USB-A port, a USB-C port, a 3.5mm headphone jack, and a Surface Connect port. However, it doesn’t support Thunderbolt 3. The MacBook Air features only two Thunderbolt 3 ports for data transfer, charging, and connecting with external devices, and a 3.5mm audio jack.

The MacBook Air has similar dimensions of 12 x 8.4 x 0.6 inches. It weighs just 2.8 pounds. Apple’s laptop is available in Space Gray, Silver, and Gold colors. It has a premium unibody aluminum design. It features a Touch ID fingerprint sensor for authentication and security.

The MacBook uses Apple’s third-generation Butterfly keyboards that have fixed the issues users had reported with older versions. However, the typing experience on the new MacBook Air is still not as good as it is on the new Surface Laptop.

Apple’s Force Touch trackpad is the gold standard in the industry. For audio, Apple has used upward-firing speakers on the sides of the keyboard to deliver stereo sound.

Microsoft’s laptop features a gorgeous 13.5-inch PixelSense touchscreen display with 2256 x 1504 resolution and a 3:2 aspect ratio. If you want a laptop with touchscreen functionality, the Surface Laptop 3 has you covered. It has 201ppi of pixel density. The new Surface Laptop delivers vibrant colors.

The MacBook Air gets a 13.3-inch LED-backlit IPS Retina display with 1600 x 2560 resolution and 227ppi of pixel density. Unlike its rival, it lacks the touchscreen functionality. Its Retina display delivers rich colors and supports Apple’s True Tone technology that automatically optimizes the display brightness and colors to ensure that the content is visible at all times. It also helps reduce the strain on your eyes.

If you want a laptop powerful enough to handle even the most demanding tasks such as video editing, the Surface Laptop 3 should be your choice. It runs Intel’s latest 10th-gen Ice Lake quad-core 10nm Core i5-1035G7 or i7-1065G7 processors. Microsoft claims the Surface Laptop 3 is up to three times more powerful than the MacBook Air.

The base model of Surface Laptop packs 10th-gen quad-core Core i5 chipset with 8GB RAM and 128GB of SSD storage. You can configure the processor up to Core i7, RAM up to 16GB, and storage up to 1TB SSD. The device features Intel’s beefed-up Iris Plus 950 GPU to enhance the graphics power.

On the other hand, the MacBook Air runs Intel’s eighth-gen dual-core Core i5 processor. The device gets Intel UHD Graphics 617 GPU, which is good enough for casual users but can’t handle video editing or gaming.

Apple doesn’t offer a Core i7 configuration for MacBook Air. It features 8GB LPDDR3 RAM and 128GB SSD storage for the base model. Users can configure RAM to 16GB and storage to 256GB, 512GB or 1TB.

According to Microsoft, the 13.5-inch Surface Laptop 3 offers up to 11.5 hours of battery life on a single charge. But in real life, the battery is unlikely to last that long. Microsoft tested the device with screen brightness set at just 150 nits. You probably won’t keep the brightness that dim, especially when using the laptop outdoors.

The new Surface Laptop offers up to 80% charge in less than an hour using the proprietary Surface Connector.

The MacBook Air packs a 49.9Wh battery. Apple promises up to 13 hours of video playback and up to 12 hours of web surfing. In real-world conditions, the MacBook Air offers between 8-10 hours of battery life depending on the apps you are running.

Both laptops are generally not used for heavy computing and they make the list of best laptops for marketing and lightweight office work.

If you are not a hardcore macOS fan, the new Surface Laptop 3 is better than the MacBook Air in almost every aspect. It delivers faster performance, better graphics power, similar battery life, a gorgeous display, and an excellent build quality – all at an attractive starting price of $999, which is $100 lower than that of MacBook Air.