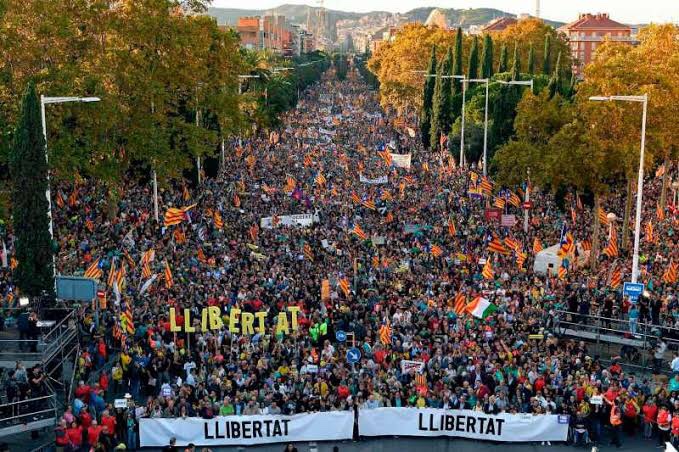 MADRID (Reuters) – Spain’s Socialist leader Pedro Sanchez, stepping up efforts to control separatist groups and parties’ activity on the internet, said on Thursday his government would not allow Catalonia to set up a virtual independent republic online.

Sanchez faces a parliamentary election on Nov. 10, with much depending on how voters react to days of sometimes violent protests that followed the jailing of nine Catalan separatist leaders this month.

Opinion polls show his Socialist party leading but with fewer seats than in a previous election in April, in part because right-wing parties received a boost from voters upset with the unrest in the wealthy northeastern region.

“I’m telling Catalan separatists. There won’t be independence either offline or online. The state of law will be as forcefully online than in the real world,” Sanchez told Onda Cero radio.

The government on Thursday adopted a decree to oblige all public administrations in Spain to host their websites in the European Union, a move aimed at putting an end to what he called the separatists’ aim of a “digital republic”.

Jordi Puignero, Catalan Digital Policy councillor, described the law as a “digital coup d’etat” at a news conference in Barcelona.

“We have witnessed websites closures, application closures, internet-traffic filtering and now they want to ban a republic that they said does not exist. Well, it exists and it is unstoppable,” he said.

The move is part of a broader crackdown by Spanish authorities on the online activity of separatists.

A Spanish judge ordered the closure of secretive Catalan protest group Democratic Tsunami, which was immediately followed by the group migrating its website to another address.

Then Spanish police requested coding hosting company GitHub, owned by Microsoft Corp, to block an app uploaded in its system by Democratic Tsunami.

A GitHub spokesperson told El Pais newspaper that Democratic Tsunami’s content had been removed. But the group said its app – designed to announce the group’s actions – could still be downloaded through a link posted on the Telegram messaging platform.

Separatist politicians, including Catalonia’s former regional president Carles Puigdemont, have set up an online “Council for the Catalan Republic” which says it has 80,000 followers.

Puigdemont’s Junts per Catalunya (JxCat) party has included in its electoral programme a plan to create a digital Catalan republic before there can be a real one.

Separately, Democratic Tsunami on Thursday called on people to take to the streets on Nov. 9, on the eve of the parliamentary election, to force the Spanish state to reflect on the jailing of the Catalans.