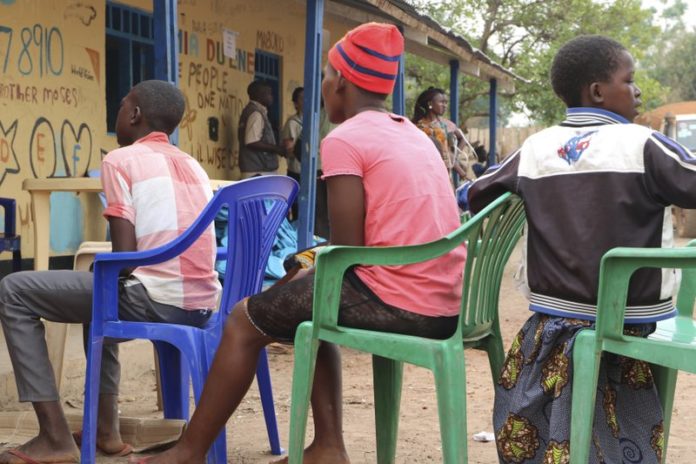 YAMBIO, South Sudan (AP) — When he escaped the armed group that had abducted him at the age of 15, the child soldier swore he’d never go back. But the South Sudanese teen still thinks about returning to the bush, six months after the United Nations secured his release.

“Being asked to kill someone is the hardest thing,” he told The Associated Press, speaking on condition of anonymity for his safety.

And yet the army offered him a kind of stability he has yet to find outside it. “I had everything, bedding and clothes, I’d just steal what I needed … here, I haven’t received what I was expecting,” he said.

He lives with family, adrift, waiting to attend a U.N.-sponsored job skills program, struggling to forget his past.

There are an estimated 19,000 child soldiers in South Sudan, one of the highest rates in the world, according to the U.N. As the country emerges from a five-year civil war that killed almost 400,000 people and displaced millions, some worry the fighting could re-ignite if former child soldiers aren’t properly reintegrated into society.

“Without more support, the consequence is that the children will move towards the barracks where there’s social connection, food and something to do,” said William Deng Deng, chairman for South Sudan’s national disarmament demobilization and reintegration commission. “They loot and raid and it will begin to create insecurity.”

Since the fighting broke out in 2013, the U.N. children’s agency has facilitated the release of more than 3,200 child soldiers from both government and opposition forces.

Yet even after a peace deal was signed a year ago, the rate of forced child soldier recruitment by both sides in the conflict is increasing, the U.N. Commission on Human Rights in South Sudan said in a statement earlier this month.

“Ironically, the prospect of a peace deal has accelerated the forced recruitment of children, with various groups now seeking to boost their numbers before they move into the cantonment sites,” said commission chairwoman Yasmin Sooka. According to the peace deal the government and opposition should have 41,500 troops trained and unified into one national army.

The AP followed several child soldiers among 121 released in February. Many said they are still haunted by their pasts, unable to talk about their experiences for fear of being stigmatized and often incapable of controlling their anger.

“Whenever I think about the bush, even if I’m playing football, I feel like stopping and picking something up and hitting my friends,” said a 13-year-old. The AP is not using the names of the former child soldiers to protect their identities.

Abducted by armed men when he was 11, he worked as a spy for an opposition group and at times was forced to witness and partake in horrific acts. He watched a soldier kill a child for refusing to do his chores, and he was forced to set a house on fire, burning alive everyone inside.

“I hear those people screaming in my dreams,” he said.

Once released, the former child soldiers are given a three-month reintegration package including food and the opportunity for educational and psychosocial support. However, the system is overburdened and underfunded.

“It’s a lot of work. Sometimes I can only spend 15 to 20 minutes with each child,” said Joseph Ndepi, a social worker with World Vision who is supporting 46 children.

Many families don’t know how to deal with their children’s change in behavior once they’ve returned.

“When he initially got out he was so rough he’d beat the kids, and when our mom tried to intervene he’d turn on her,” one 16-year-old said of her elder brother. Both children were abducted and released from armed groups at the same time.

While the girl wanted to forget the past, her brother tried to relive it.

At night he’d sneak out of the house and perform mock ambushes to see how close he could get to robbing people’s properties without being caught, the 17-year-old said. Since starting therapy he has stopped the late-night excursions and reined in his temper.

Some of the children’s behavior is related to the power they felt in the army, said Kutiote Justin, a social worker with Catholic Medical Mission Board, an international aid group. One former child soldier he works with insists on calling himself “the commander.”

A lack of resources for reintegration could hurt long-term assistance.

About 420 children have participated in vocational courses to learn professions such as welding, carpentry and tailoring, yet it’s unclear if there will be enough funding to continue past December.

Almost $5 million is needed for the next two years but currently only $500,000 is available, according to UNICEF.

“Donors aren’t funding to the same extent they used to and now there’s potentially an even greater need,” said spokesman Yves Willemot. And more child soldiers are expected to be released in the near future, he said.

South Sudan’s government isn’t investing in child soldier reintegration, according to the national disarmament, demobilization and reintegration commission. The hope is that once a unity government is formed in mid-November, a key part of the peace deal, the international community will be more inclined to contribute.

But the peace deal is fraught with delays and questionable political will. The government hasn’t committed the $100 million it pledged for the peace process, and key elements such as training a unified army have yet to be realized.

Meanwhile, families whose children have returned from the fighting are doing what they can to keep them from leaving again.

In August the 17-year-old felt lonely, so he packed his bags and headed for the bush. He got as far as the main road before his family’s words echoed through his head.

“Stay with your people, don’t go to that place,” he said, recalling their advice. “Just stay here in peace.”