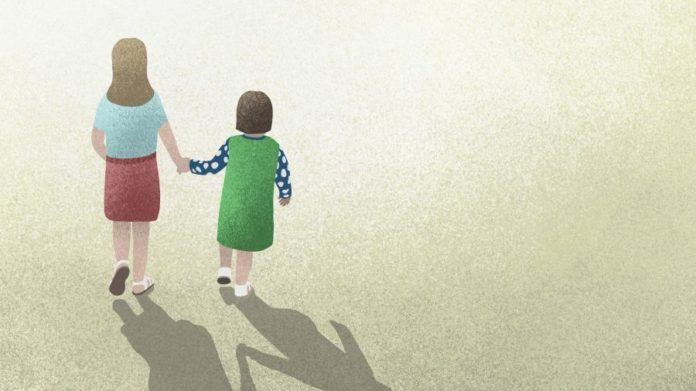 arlier this year, Walking Dead actor Kevin Zegers posted a video on Instagram of his 3-year-old daughters talking to their mother, Jaime Feld, about their father’s alcoholism. In the video, captioned, “Learning em’ young,” Feld can be heard explaining to her kids that Zeger is attending an Alcoholics Anonymous meeting, and the girls say their father is an alcoholic. Some viewers were quick to judge Feld and Zegers for being so open with their young children about Zegers’ addiction, while others lauded their transparency and urged more parents to speak to their children about their own addictions and mental health issues. Considering that up to one in four children worldwide has a parent with a mental illness, what’s the right way to handle this?

According to social workers Leigh Wolfsthal and Kevin Barry Heaney of The Safe Foundation, it’s important to keep children informed about parents’ health issues and use language they understand.

“Keeping secrets from children about what’s going on with a family member is not helpful because their uncertainty can turn into anxiety. However, one must consider the child’s age when determining how much they should know. It’s one thing to tell a child that you’re going to visit Mommy in rehab, and quite another to tell a child that Mommy has an illness that you can’t always see and she’s getting help for it,” says Wolfsthal. Children won’t understand what rehab is, but they’ll understand that “Mommy is sick and is going to a place that will help her get better.”

Some parents choose not to disclose their illnesses to their kids because they believe they’re protecting them. But that’s changing: more parents are becoming open with their children as stigmas die down, according to alcoholism and substance abuse counselor Isaac Setton.

“It’s helpful for children to know what is going on in their household. Leaving them in the dark can lead to uncertainty about why or how the situation happened,” he tells HG.

He says that when parents are open with their children, it allows the kids to realize they’re not to blame. This matters a lot, since research shows that open communication about mental illness helps to destigmatize these health issues and prevent generational mental illness.

Jennifer Marshall, co-founder of This is My Brave, a storytelling platform that aims to bring mental illness and addiction out of the shadows and into the spotlight, started sharing her experience with bipolar disorder in 2011 on her blog, Bipolar Mom Life. At the time, her two children were under the age of 3.

“They were way too young to understand what I was doing, but as they grew, I’d talk with them about the fact that I had an illness in my brain called bipolar disorder but that I’m okay because I take medicine every day and see my doctor and therapist,” she says.

Now that Marshall’s full-time job is in mental health awareness and advocacy, her children, ages 8 and 10, are old enough to understand the importance of their mother’s work. “They’ve attended several shows and tell me often that they’re proud of me,” she says. She wanted to raise her children with open conversations about mental health so that they too could speak about the struggles they face and not feel ashamed or the need to hide.

“Talking openly about mental illness has brought my family closer, and my hope is that if my kids ever begin to experience an issue, they’ll feel comfortable coming to me and their dad for help,” she adds.

University of California, Berkeley professor Stephen P. Hinshaw knows firsthand how damaging it is to live with family silence under the auspices of protecting kids. In his memoir, Another Kind of Madness: A Journey Through the Stigma and Hope of Mental Illness, he writes about his childhood growing up in a seemingly idyllic household with a philosopher father and an English instructor mom.

“What was wrong with this picture? Dad’s sudden, mysterious, inexplicable absences, for three, six, or even 12 months at a time. I didn’t know if he was alive or dead; there was no discussion, during his absences or upon his return,” he begins the book.

It wasn’t until his freshman year of college that he learned his father had been involuntarily sent to mental hospitals for what was thought to be schizophrenia.

“His lead doctor told him that if his two children (my sister and I) ever learned the reason, we’d be permanently destroyed. So he and our mom were forbidden from ever mentioning the topic,” he explains.

Until he knew the truth, this silence led Hinshaw to believe that he was to blame for his father’s absences. The silence also caused Hinshaw to experience parentification—that’s when a child is compelled to act as parent to their own parent or sibling, which can occur when children sense conflict but no explanation or emotional understanding is offered.

“When kids face difficult circumstances at home but nothing is discussed, there are essentially two choices they face: either they believe the world to be a cruel, random place, or ‘internalize’ responsibility—with the latter affording at least a semblance of control (though at a high cost to their self-image),” he says.

When a parent does disclose their illness to a child, Hinshaw says it should be “planned and relatively non-emotional.” Even though parents may feel they’re protecting their kids by withholding information, kids typically know that something is wrong. “Keeping silent just promotes internalization, resentment, or both,” he adds.

Experts like Dr. Barbara Howard, assistant professor of pediatrics at Johns Hopkins University, say that it’s best for parents to name their mental illness when sharing with their kids—this way, their child can understand the illness and signs to look out for.

Children want to hear that their parents are working to get better, even if they’ve been acting differently. “What thoughts have you had about why this happened?” is a good question to ask to gauge how your child is reacting and if they feel they are to blame for your recent outburst.

Parantap Pandya of Family Problems Solutions, a family coach who works with children of mentally ill parents and spouses who co-parent with a mentally ill parent, says that it’s okay and even encouraged for parents to tell their children that “Mommy or Daddy needs space and rest” when they don’t feel well and that it has nothing to do with them. Dr. Howard explains that children still need to be reassured by their parents that they love them. “It is the illness talking” can be one way to show your children that it’s still you underneath the illness or addiction.