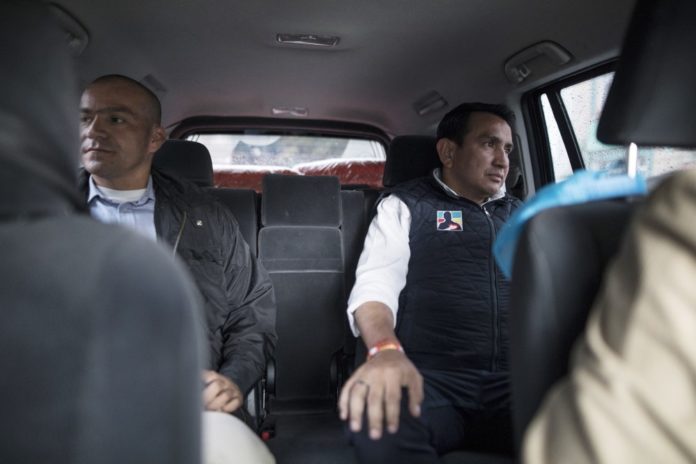 The candidate for governor of one of Colombia’s largest provinces had been used to biking freely around town, driving with the windows down and drinking tiny cups of the dark coffee known as “tinto” with voters late into the night.

Then came the menacing pamphlets declaring him a “military target.”

“We’re not going to allow allies of the corrupt oligarchy to take power of this region,” the letter purporting to be from dissident rebels of Colombia’s once-largest guerrilla group warned. “We’ve retaken arms to defend the revolution.”

His wife urged him to end his campaign for Sunday’s local elections, Colombia’s first such vote for mayors and governors since the peace accord ending Latin America’s long-running conflict. In bouts of anxiety, he circled back to his own fatherless childhood, worrying that continuing might mean leaving his 5-year-old son with just one parent. But in the end, the university professor decided he’d soldier on, surrendering his fate to God and a bulletproof vest.

“At the end of the day, if someone wants to harm me, they will,” Florez said.

Despite the historic accord, running for office in Colombia is still a risky proposition. In recent months, two candidates were shot and burned to death in a campaign vehicle. Others have narrowly dodged gunfire by mystery assailants. One received a box of roses with a bullet tucked between the stems.

Election violence is once again on the rise after dropping to an all-time low, according to independent monitoring groups. In all, seven candidates have been killed and dozens more threatened in the lead-up to Sunday’s vote in a worrying sign that old patterns of violence are persisting even without rebels targeting polling sites.

“It’s a paradox,” said Camilo Vargas, a coordinator with the non-profit Electoral Observation Mission in Colombia. “The demobilization of the biggest guerrilla in Latin America is producing violence. It should be the opposite.”

The Electoral Observation Mission counts 108 violent incidents against candidates thus far, ranging from ominous pamphlets to deadly sniper attacks. That’s up from 74 in 2015, when rebels with the former Revolutionary Armed Forces of Colombia were in talks with the government and had declared a ceasefire.

While authorities largely fault dissident rebels and drug cartels, analysts believe those groups are not responsible for most of the violence. A number of candidates have been threatened or killed in areas where illegal armed groups do not have a presence. The new violence also targets candidates across the political spectrum.

“This violence can’t be explained just by post-conflict conditions,” said Ariel Ávila, deputy director of the Peace and Reconciliation Foundation.

Colombian President Iván Duque’s government has perhaps gone further than any other administration in ramping up candidate security, setting up new channels for political contenders to report threats, devoting millions to protect some 2,050 candidates and employing an estimated 8,000 bodyguards.

In an interview with The Associated Press, Duque said he believes record-high levels of coca cultivation inherited by his administration have contributed to the violence by funding illegal armed groups also killing hundreds of social leaders.

“We know that’s a threat,” he said. “But I think we have taken the right decisions.”

Colombia has a long and brutal history when it comes to political violence.

The murder of populist Jorge Eliécer Gaitán in 1948 sparked a conflict between the nation’s Conservative and Liberal parties that left tens of thousands dead. In the 1980s, scores of politicians affiliated with the Patriotic Union, a party aligned with the now disbanded rebels, were gunned down. Luis Carlos Galán was poised to win the presidency when he was shot to death in 1989 after speaking out against powerful drug cartels.

“During the years of the armed conflict, there were many, many acts against the elections,” said Cynthia Arnson, director of the Latin America program at the Woodrow Wilson International Center for Scholars.

When Florez learned of the threatening pamphlet circulating in a small town outside Bogota where he’d campaigned, he said authorities responded by equipping him with a bulletproof vest and a “self-protection guide.”

The guide included advice like avoiding crowds and not announcing where events will be held, impossible conditions for a candidate running for office. He travels in a bulletproof vehicle with several bodyguards wherever he goes.

Despite his unwavering commitment, Florez said he can’t help but have moments of fear.

“The human being behind the candidate worries,” he said.

With most of the crimes left unsolved, it’s unclear who is behind much of the violence. Studies by Ávila’s organization suggest illegal armed groups are responsible for just 20 percent of the threats and attacks. One leading theory is that candidates affiliated with family clans who have long ruled local offices may be resorting to violence against competitors as they find their economic and political interests threatened.

“We’ve seen that before in Colombian history,” Vargas said.

Former President Juan Manuel Santos proudly hailed last year’s presidential election as the safest in the nation’s history. No polling sites had to be relocated on account of violence. Groups like the Electoral Observation Mission expect few problems at voting sites this year, but note that is just one indicator of safety.

“We don’t agree these elections are more peaceful in terms of violence against candidates,” Vargas said.

Donald Ferreira, a former FARC commander running for an assembly seat, said he was forced to cancel one recent campaign event after community members reported suspicious men nearby with guns asking when his car would arrive.

Though he has been provided with a bulletproof vehicle, Ferreira fears that alone won’t prevent enemies from trying to stage an attack.

Ex-combatants were reminded again of the dangers they face Thursday, when a former rebel was killed by masked assassins inside a demobilization zone. Leaders of the party formed by the guerrillas said they consider Alexander Parra’s death an act of political violence because his wife was running for local office.

In total, 158 ex-rebels have been killed since the peace accord’s signing, according to the United Nations. Parra’s death was the first to take place inside one of the nation’s 24 transition areas, which are guarded by authorities.

“Our human rights need to be defended,” said Griselda Lobo, a senator for the former combatants’ party.

Florez, who was born into a poor family and briefly left school at the age of 12 to work at a bakery and support his single mom, managed to win a scholarship to college and later earn an advanced degree at Tulane University.

Content with the professor life, he said he’d never pondered a career in politics. But after seeing an ad on television from former President Álvaro Uribe’s party, he felt compelled to respond to a call for new leaders.

With no political experience, Florez was unexpectedly selected as the conservative party’s candidate for a key governorship and is now pressing forward on platform of stamping out corruption, improving healthcare and education.

But the death threats have forced him to seriously consider giving it all up.

A second threatening message targeting a broader slate of candidates for Uribe’s party left many further on edge. Some campaign volunteers decided to quit. Other candidates removed the party’s logo from their campaign ads.

One dropped out altogether.

“It’s sad what’s happening,” Florez said. “You want to work for your community and end up a target.”